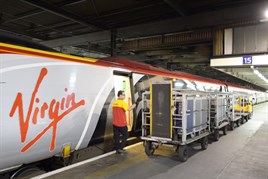 It’s not just the train that makes Virgin Trains’ longest diagram work - the staff are just as vital.

The train takes more than 22 hours to complete its massive 1,3831⁄2-mile daily journey (RAIL 758), and throughout the day there are 35 staff on board to make it all happen. They work varying shifts, and ideally in teams.

It may sound obvious, but with VT’s Anglo-Scottish operations, its Anglo-Welsh operations, several depots and thousands of staff, it all needs to be meticulously planned.

The demands of the Very High Frequency (VHF) timetable also dictate there is little room for error. With relatively short turnarounds, staff must be in the right place to ensure that the trains continue operating on time.

VT has 3,300 staff. They are rostered by Simon Bytheway’s team. Bytheway, based in Preston, is the operator’s resources planning & operations manager.

“We are centralised in Preston, but have local managers,” he tells RAIL.

As this issue of RAIL went to press, the VT rosters were due to change. The reason for the change is because the National Rail Timetable is revised in May and December, and yet the rosters did not match those revisions. Now, until the end of the current VT franchise, they will.

Engineering work is also having an effect, says Bytheway.

“There has been plenty of it, and it is done on short-term planning. There are eight weekend blocks, which means the weekend rosters need to change. We did the Watford Junction blockade as a short-term plan, and that was done on an eight-week cycle.”

Bytheway meets RAIL on the 0847 Liverpool Lime Street-London Euston on September 4. He has rostered all the staff.

“We have a driver, train manager, customer service assistants and chef. The number of staff drops to four for the Light Bites menu, and then three until 1700, when the evening menu is available and it increases to five. From 1700-1900 it is the evening peak, and then post-1900 it is three staff again.” He explains that catering staff work more hours than drivers, and ideally they work in teams. A driver’s longest shift is ten hours, a Train Manager’s is 11, and a catering staff member is 13.

For this leg of the journey, the driver will have booked on at 0812, and will clock off at 1519. He will work the 0847 Liverpool to Euston and the 1307 return. A Personal Needs Break (PNB) for a driver is 30 minutes, but there is also ‘walking time’ to be included - this is the time taken to get from the train to the staff facilities, and varies according to location.

As a comparison, the Train Manager on this particular train usually signs on at 0456 and works the 0526 London Euston to Liverpool Lime Street and 0847 return, before then doing the 1203 Euston to Birmingham New Street and 1350 return.

Staff are based at eight locations, and they all sign different routes. Preston is the only depot where drivers sign the entire West Coast Main Line. They drive from Preston to Glasgow and Edinburgh, and southbound to London. They don’t drive to Liverpool, although some do sign to Manchester Piccadilly and all visit Birmingham New Street.

Bytheway says the reason for the variations is down to the grades the drivers have, and the links they are in (the links are where driver’s rosters are allocated, depending on their skill set and experience).