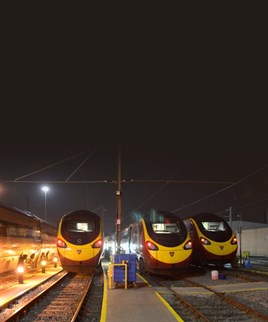 Ten years ago there was a revolution. A red one. The West Coast Main Line changed forever when the sleek Class 390 Pendolinos tilted their way onto the main line, replacing the popular but ageing and increasingly unreliable locomotive-hauled trains.

The ‘390s’ were the first trains built to tilt in the UK since the ill-fated Advanced Passenger Train (APT) in the 1980s. Although the IC225 sets had been constructed for 140mph running, and the coaches designed with high-speed running, they never tilted.

Alstom built the ‘390s’ for 140mph running. They were supposed to be able to use in-cab signalling to reach these speeds, but the West Coast Modernisation Plan was scaled back, and so now they only attain 125mph.

Virgin won the West Coast Main Line franchise on February 19 1997. At the launch, the company claimed that tilting trains would run on the WCML within four years - it missed its target by a year.

Later that year, on October 28, Railtrack announced a £2.1 billion upgrade of the WCML to enable high-speed services by 2005.

On November 17 1998, the Pendolino design was unveiled, and in 2000 the first bodyshell arrived in the UK. Initially 53 eight-car trains were ordered, but from 390035 onwards they were delivered as nine-car trains, with the first 34 extended to nine cars retrospectively. They were built at Savigliano in Italy, with the bodyshells then shipped to Alstom’s Washwood Heath facility for final fitting out.

Richard Branson launched the Pendolino at London Euston on April 30 2002, and called it “the best-looking train in the world”.

On July 23 2002, 390010 become the first to carry passengers in the UK when it worked the 1102 Birmingham International-Manchester Piccadilly, in conjunction with the Commonwealth Games that were being held in Manchester. The first ‘390’ arrived at London under its own power on November 7 2002, when 390011 glided into Euston.

Around a month earlier, on October 9 2002, the Strategic Rail Authority had unveiled a £9.8bn plan for a WCML upgrade. These trains were to transform the WCML.

The extra units, as well as the four new 11-car ‘390s’, were all built in Italy and shipped to the UK through the Channel Tunnel. They were integrated into the existing ‘390s’ as they underwent their H3 overhauls at Longsight (Manchester), which is where Alstom maintains the trains.

Each day 50 Class 390s are used on the WCML. Maintained by Alstom, they work from Wembley, Oxley, Longsight, Edge Hill and Polmadie. Additionally, a set can stable at Preston.

There is the possibility, when the North West Electrification Programme is complete, that the Preston ‘390’ may run to Edge Hill. It cannot go to Longsight, as the Manchester depot is at full capacity. At weekends some are also stabled at London Euston.

An additional 51st Pendolino is to be used by Virgin Trains on a Friday evening. This will replace a Mk 3 locomotive-hauled train (nicknamed the ‘Pretendolino’ because it is in the same livery externally and internally) that has been leased as cover for the ‘390s’, but which will be sent off-lease on November 9.

“The standby set will come into use,” VT Fleet Delivery Manager Andy Grundy tells RAIL. “It will come off Longsight at around 1600, and that means we can still do more work on it if needed. The set is booked off an exam at 1409.”

Grundy says that the set doesn’t normally come into use, as usually there is a spare at Oxley. This ‘spare’ will most likely be based at Wembley in the future, as that is where it makes most sense operationally.

RAIL visits Wembley depot in the early hours of September 4, as the ‘390s’ are busily being prepared for work. One set (390104 Alstom Pendolino) is in the main shed. It will later work the longest diagram, although Grundy and Alstom Operations Project Manager, Mainline, Derek Swanson both explain that there is no extra work needed for it. “If we prepare for a certain diagram, that means we cannot swap sets if we need to.”