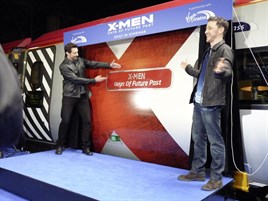 A cast of Hollywood stars will be on display up and down the length of the West Coast Main Line for the next few months, courtesy of a branded Class 390 Pendolino advertising the latest X-Men film.

Virgin Trains is keen to expand the passenger experience beyond the simple boarding, travelling on and alighting from a train. From arriving at the station through to leaving the destination station, VT wants to change the way people view train travel. Branding a train with mutants who battle other mutants through time travel is merely the first step.

The train that has been branded is VT’s 11-car Pendolino 390155, which was also named after the new film X-Men: Days of Future Past.

But the operator didn’t just decide to brand a Pendolino, name it, and leave it at that. It also renamed Wolverhampton station ‘Wolverine’ for the day, and encouraged passengers and staff to buy into the whole idea.

The train chosen, one of four delivered in 2012, was specifically selected because of its condition. (A brand new ‘390’ was deemed to have less bodyside damage than those delivered a decade ago.)

For its transformation, it was stopped at Alstom’s Longsight depot in Manchester, the home of the ‘390s’. Alstom built the trains, and has a contract to maintain the 56-strong fleet.

Before the vinyls were applied, Alstom hand-washed the train. The labelling on the ‘390’ was then removed, and the X-Men wrap applied. This took two days. Once that was completed, the numbers and labelling were re-applied.

The livery design was done in-house. The work started last summer, and was signed off late last year. 3M supplied the vinyls, and Stewart Signs (a local firm based in Manchester) applied them. The train has the same design on both sides, but reversed so the characters are at different ends of the train.

The newly refurbished Pendolino, which took 160 hours to wrap in 549m2 of film, will showcase its X-Men livery to passengers up and down the country until July, when the livery will be removed and it reverts to VT colours. The nameplates will remain.

Another factor for selecting this particular ‘390’ is that it was due to be at Longsight anyway, for maintenance. The Pendolinos are undergoing a modification programme, including the fitting of new catering equipment and refurbished toilets.

Rather than release 390155 back into service after it received the modifications, instead it was held back for its transformation, and travelled to London overnight on March 30 ahead of its March 31 launch (RAIL 746).

Adrian Varma, partnerships and regions manager at Virgin Trains, tells RAIL: “We have tried to encourage more wrap applications. We want to deliver as much ‘bang for buck’ as possible, and offer clients the best possible impact.”

Varma hasn’t ruled out more ‘wraps’. Indeed, this is the third that VT has applied to a Pendolino.

In both previous cases, 390029 was selected. In 2006 it carried a vinyl advertising Superman Returns, and when those vinyls were removed, it was used to advertise the Manchester International Festival in 2007, with images from the opera Monkey: Journey to the West applied.

Varma explains that on 390155, key characters from the new X-Men film feature on each of the Pendolino’s 11 carriages. “It was done for the most impact,” he says.

In terms of who approached whom, Varma says it was VT that approached the film’s studio, Twentieth Century Fox.

The fact that X-Men is a £3 billion franchise certainly helps attract attention for VT, he says. Asked by RAIL what VT will get out of the deal, he says that the exposure will help the operator.

The film is released on May 22, and is billed as: “The ultimate X-Men ensemble fights a war for the survival of the species across two time periods. The beloved characters from the original X-Men film trilogy join forces with their younger selves from X-Men: First Class in an epic battle that must change the past - to save our future.” That gives the weight to VT’s tongue-in-cheek time travel claims.

Varma speaks of brand a lot. He should, because VT is acutely aware of how customers and passengers view the business. Virgin’s well-known brand is linked with both travel (trains and planes) and entertainment (films and music).

“Younger people and parents, who grew up reading about and seeing Richard Branson, know the Virgin brand. We have a lot of work to do meet their expectations. Wrapping the train is one element of that.”

The ‘390’ was launched at London Euston in front of one of the largest gatherings of the media RAIL has ever witnessed.

Paparazzi mixed with film, television and radio journalists, to catch a glimpse of (or a quote from) two of the film’s stars, Hugh Jackman and James McAvoy, who attended the launch of the train and named it X-Men: Days of Future Past.

Jackman joked that seeing his face on a train was not something that happened every Monday morning. He added that it was nice to see himself on the train rather than be booted off one, which had happened to him when he was 18. McAvoy told the assembled throng that his children were excited by the train.

Varma said: “For us it’s all about our relationship with speed, and we feel that this latest instalment in the X-Men franchise ties in perfectly with Virgin Trains’ relationship with travel. We strive to make sure our customers’ journeys are as quick as possible, as if they are time travel devices.”

Chris Green, theatrical marketing director at Twentieth Century Fox, said: “We are thrilled to be a part of this special event, and the train looks incredible. Having both Hugh and James here as two of the film’s key characters has added even more to the excitement and buzz! Virgin Trains has helped to bring the film to life, and will give customers and fans a glimpse into what they can expect come May 22.”

VT staff were also a key part of the day, and they lined up to get their pictures taken with the Hollywood stars.

All the time London Euston carried on in the background, business as usual, with trains arriving and departing. Eyewitnesses spoke of passengers rushing to see the ‘390’ and have their photographs taken with it. The interest it generated on the first day was immense, and that has been the same every day since.

Also at the launch were 47 competition winners who were given the chance to board the train and meet the stars.

Surely, though, this is similar to the East Coast Class 91 and Mk 4 set that was branded to advertise the DVD release of Skyfall last year (RAIL 717)? Not so, says Varma.

“This is different. This is special. It is not associated with the film, it is a link directly with Fox. We have thrown the kitchen sink at this project. Hugh and James did the PR for the film at this event.”

As for where the train will run, there is no set roster for it. Last year, EC’s Skyfall ‘91’ was rostered to work a lot of trains to Leeds because that was the operator’s busiest route, and would generate the most interest. With 390155, the plan is different.

Says Varma: “We are looking at where to take the train, but this is an 11-car train and they run on our busiest services.”

There are also plans to make sure that this is not seen as a London-centric event. These plans included renaming Wolverhampton station ‘Wolverine’ for the day, after the character Jackman plays.

Says Varma: “We want people to see it . From a social point of view this is engaging, it is amazing. It is about trying to get people to make it more than just a train experience.”

He tells RAIL that there will probably even be ‘talking toilets’ on the train, with stars from the film lending their vocal chords to the cubicles. This is not new, however - Will Ferrell, star of Anchorman 2, did something similar last year.