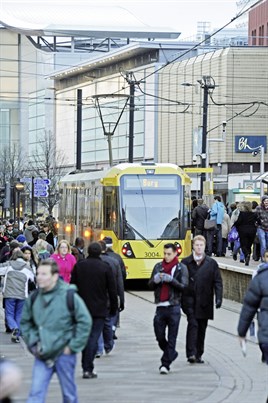 Any award for ‘best new UK tram system’ would be hotly contested.

For example, there have been plenty of plaudits for the Nottingham Express Transit system since it opened in 2004, reflecting its expansion and the city’s vision for its trams (RAIL 734).

But the template remains Manchester, owned by Transport for Greater Manchester, and operated and maintained by French-owned RATP Group. Its routes now cover almost 50 miles across the conurbation, and there are plans for further expansion.

Manchester Metrolink began blazing a trail in April 1992, and in its first year it carried some 8.1 million passengers. As the network steadily expanded into new areas, so passenger numbers increased - it now carries triple that number of passengers, according to latest figures.

And work to expand the system’s infrastructure is ongoing. Driver training over the line to Rochdale Town Centre line began in December, ahead of Rochdale services beginning to use the new route on January 27, ten days after the closure of the old railway alignment between Werneth and Oldham Mumps.

As with tram networks in other parts of the country, Metrolink faces its own unique challenges. It is an intensively used system, with peak demand on weekday mornings between 0700 and 0930 (and especially between 0730 and 0830).

To combat this demand, two trams have to be coupled together, with 11 double trams used (the maximum that the current operational fleet can muster).

Eight of those are used on the Altrincham and Bury lines, described as “far and away the network’s most established and busiest routes”, from 0700 onwards. The other three double trams run between East Didsbury and Rochdale, on a route that opened in May 2013.

The launch of Metrolink services to Ashton-under-Lyne in October 2013 prompted the adjusted phasing of double trams (following passenger feedback), specifically changing the double trams on the East Didsbury line to run between 0800 and 0830. Since January 27, these doubled-up services now leave East Didsbury between 0745 and 0815.

“We run these doubles to match demand, and regularly review their phasing (using passenger feedback from a number of channels, including social media) to ensure the overall balance across the peak period is as effective as possible,” says a Metrolink statement.

But there’s only so much that can be done to meet the expectations of passengers on overcrowded morning peak services.

Hence the Second City Crossing (2CC). This will run from a point on Corporation Street south of Manchester Victoria, along the west of Exchange Square, past the Town Hall, and onto the existing track at St Peter’s Square and Lower Mosley Street.

As a result of the 2CC work, the existing Metrolink stop in St Peter’s Square will be relocated to the northern end of the square, close to the Mosley Street/Princess Street junction. The existing tracks between Elizabeth House and the Central Library will be realigned, to help create a new ‘civic space’.

The new stop is situated on Corporation Street between Exchange Square and the Manchester Arndale, serving major retail and leisure facilities in the area including the Royal Exchange, Manchester Arndale, Marks and Spencer, Selfridges, Manchester Cathedral, the Triangle, the Printworks, the Medieval Quarter, and the new National Football Museum.

Work on this route was authorised in November 2011, after the Transport for Greater Manchester Committee authorised a Transport and Works Act application (which was submitted to the Department for Transport in May 2012). Physical construction work started at the end of 2013.