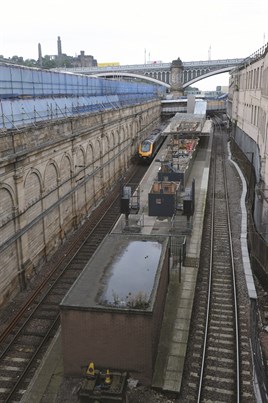 I visit one of the toilets to find it in an awful state, with a broken Dyson hand-dryer stuffed with a mass of paper as a stop-gap! To make matters worse the wash hand basin isn’t deep enough to bath a mouse, so water splashes and soaks the floor when you use it.

My disappointment is compounded by a visit to the buffet, where there is no price list displayed and consequently no idea of what is on offer. Moreover, the coaches display the classic Mk 3 problem with air-conditioning, which has failed in two of the coaches.

I could go on and mention the soaking vestibule carpets, where rain has penetrated the gangways, or the gangway doors that seem to have a mind of their own, or many of the other niggles I find. In all the years I’ve been writing these articles, I can honestly say I’ve never been as disappointed in a ‘new’ train.

We decide to abandon it at Leamington Spa, to catch a Chiltern Class 168 on a later train. I’ve always enjoyed travelling on Chiltern, and use its trains regularly, but I can’t help wondering if standards and attention to customer service haven’t slipped. The cleanliness of our unit isn’t brilliant, and when the conductor finally comes through, he makes no effort to check tickets. Instead, he ineffectually asks the coach if anyone wants to buy one.

At Birmingham Moor Street we make up for our disappointments with lunch at the Centenary Lounge - a lovely cafe with a GWR period feel, friendly and attentive staff, a wide range of food and drinks, comfy seats, free WiFi and seating on the station concourse. I always try to pop in when I’m passing through, as it’s an ideal place to kick back, observe life on the station and enjoy watching the world go by.

Suitably fortified, we brave the building site that is Birmingham New Street, and catch a Virgin Voyager to Wolverhampton. It’s not particularly busy, but entertainment is provided by a young lady opposite who spends the whole journey expertly applying the entirely contents of her (not inconsiderable) make-up bag!

At Wolverhampton we make a brief stop to visit another old railway icon - the Great Western pub, which is hidden in the back streets behind the station. Formerly the haunt of many a thirsty railwaymen and postie, it’s only the latter you’ll find nowadays, although there is still plenty of railway memorabilia decorating the bar, as the former low level station is only a stone’s throw away.

Continuing north I catch another Virgin Voyager to Carlisle, my final destination of the day. Although some people dislike them, I’ve never really had any problems with the Voyager family. They can be awkward when crowded, but so can any train. The underfloor engines certainly don’t bother me, as you soon learn to tune them out.

My particular train is busy, but seats are available, so I set up my laptop and settle in for the ride. It’s already dusk, so I won’t be able to enjoy the wonderful landscape north of Preston, but on this trip I am more interested in the staff.

The winner of the new West Coast franchise is due to be announced in the morning, so I want to chat to staff to see what they think, and they respond, without reservation.

The consensus is that they are happy and proud to be working for Virgin, and fear the changes that First Group might make. They have seen what happened to CrossCountry, and worried that cuts will be made to onboard services… and to staff.

It is clear to me that First will have a major problem replacing the powerful Virgin name. People are proud to be linked to such a glamorous international brand, but First Group is no Virgin, and staff saw it as little better than a bus company.

I do my best to calm their fears, by pointing out that some First franchises are very well run and staff seem happy. I wish them all the best when I leave the train at Carlisle, without telling them what is already known to parts of the industry. They’d find that out the next morning…