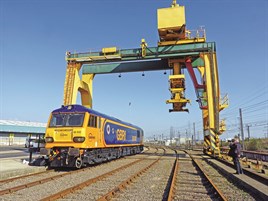 A buzz seems to be surrounding GB Railfreight at the moment.

Maybe it’s the new contracts. Or the locomotives it is either leasing or buying outright, including the hiring of a Deltic for several weeks. Or the intention to run cross-Channel freight trains, to serve foreign terminals with trains that operate along the UK’s only high-speed route (HS1), and the desire to enter new markets in this country.

Then, of course, there is the sale of the company to Europorte (RAIL 646).

That sale caught many by surprise. Owner FirstGroup had seemed happy with GBRf, leaving the company largely to its own devices. It had the third largest freight company in the UK on its books, which made a profit, had a healthy turnover, and which had a dynamic managerial team that wanted to double its size.

Yet just before Christmas 2009, the wheels were set in motion for a sale. Rumours abounded over who would buy it, with cash-rich rivals mooted to be hovering. First had appointed a new financial director, and he was keen to see added value created for stockholders. A quick sale would do that.

And making available a company that didn’t fit the rest of First’s business (GBRf was the only freight company in its portfolio, but was attractive because it was profitable) made sense. And in May 2010, it was duly sold.

The sale saw GBRf’s popular Managing Director John Smith expand his role to also include Europorte, so he now oversees freight through the tunnel.

Europorte is owned by Eurotunnel, which is split into two parts. The first is the concession that operates and maintains the Channel Tunnel (for which it has a contract until 2085), and within which falls the movement of lorries and cars on the shuttles. Then there is the operations side of Eurotunnel, which includes Europorte and now GBRf, and other companies in France.

Combining these parts presents Smith with a massive window of opportunity, and it is one he is keen to exploit.

One problem for GBRf and other companies in the UK was that Class 92s were the only locomotives capable of working in the Tunnel as well as the UK and France. DB Schenker owns 23 of the Class 92 fleet, with the remainder split between SNCF and Eurotunnel (ET having bought its share from Eurostar when the latter axed its ‘Nightstar’ sleeper services). And at the time there was little freight through the Tunnel, even though DB was (and is) hugely keen to operate trains carrying goods from mainland Europe.

But following its purchase by Europorte, GBRf now has access to 11 Class 92 through Europorte Channel. This will be hugely beneficial - it means that another operator can run trains through the Tunnel, as Europorte Channel will haul the train from Dollands Moor.

A handling charge (understood to be about £500) is needed, while a tariff is paid for the path. Smith says the tariff was lowered, although DB is known to still be unhappy about the charges.

“With the sales it means we can now start contracting terminal to terminal business, and can start working with other businesses,” says Smith.

In March a key part of this cross-Channel network was launched… interhubGB.

Initially trains will run from Barking-Barton Dock Road  in Manchester(RAIL 667). But by using the Russell’s terminal at Barking, European freight can serve the terminal either by the ‘classic’ route via Ashford (which will be used initially) or far more intriguingly by HS1, which also connects to the London Tilbury & Southend Railway at Barking.

“Barking is a core part of our strategic network,” says Smith. “I think intermodal is the key market. It’s a fair bit bigger than coal now.” He says that intermodal is worth £200 million, with coal £130m.

The fact that key routes such as Nuneaton-Felixstowe and Southampton-Birmingham are now being re-gauged by Network Rail so that bigger containers can be transported is testament to this.

Smith also highlights the infrastructure work being carried out at Felixstowe - new sidings are being installed and the branch to Britain’s busiest deep-sea port will be doubled. Meanwhile a new curve is being installed at Ipswich, allowing container trains to be diverted via the cross-country route to Ely, rather than London.

And the route from Birmingham to Southampton has been the subject of a £56m project to enable bigger containers to run on the line. This has a huge significance for GB.

“We have to be in Southampton,” says Smith. “It is a different model, though. Felixstowe is about shifting boxes whereas ABP is different. It has terminals and they are long-leased to operators. But they are all open access. We have to get in there.”

It is the latter into which interhubGB falls. Dealing with customers that have a backload of traffic is key, while a full train is also vital - the money is in the last few boxes of a container train. Smith has mentioned to RAIL before that a lightly loaded container service is not a train, “it’s a lorry”. That comparison has stuck ever since.

Export is key to the intermodal rail freight market, but in the cross-Channel market it is being challenged by ferries, according to Smith. This is where the new interhubGB concept comes in.

“Our intent,” he says, again with a real passion, “is to look at intermodal into France. We won’t go on HS1 to begin with, but we will have to integrate services. We are not proud; we will sell forward carriage on trains from Barking operated by DRS (Direct Rail Services) as well as ours to Manchester. We can offer space on these.”

Smith admits that there has been a debate within the company about this decision to sell space on other trains, but as it is a ‘done deal’, it seems silly to stop, he reasons.

He says that interhub is an integrated network delivering door to door, but acknowledges a problem with the distances in the UK.

This is a consideration also raised by Tim Wait from 3WAY Logistics, a partner in the concept. Wait suggests that a train needs to be covering at least 150 to 200 miles to make it an attractive option, as well as carrying freight on the return journey. He says this mileage figure may drop because of the increase of fuel prices perhaps affecting haulage firms, although this increase will also apply the railways - GBRf has itself seen fuel costs rise by a third in the past 12 months.

Smith agrees with Wait about distance. “You need Glasgow-Manchester, London-Midlands, Glasgow-the North West and Glasgow-Midlands. Some could also go to the South West, and you must also rotate assets.”

He says that GBRf is looking into serving Bristol too, but notes: “We have seen operators come and go there. You must build up confidence in customers. Supermarkets are an area we are looking at. It is about volume being consolidated.”

Earlier this year GBRf won a contract to provide shunting locomotives at CELSA steelworks in Cardiff (RAIL 663).
This seemed different to other contracts the company has.

“It is actually a similar type of operation to Whitemoor . One of our companies in France do a lot of shunting. We learn a lot from France.”