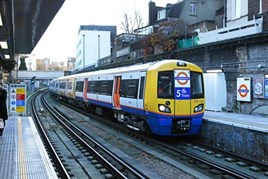 The sheer success of the London Overground (LO) has generated a need to extend the 57 Bombardier-built Class 378s from four-car to five-car formations.

The new ‘fifth cars’ are being constructed at Derby Litchurch Lane, in the same way that the original Class 378s were built.

They were introduced from 2009 onwards, and allowed LO to replace ageing electric multiple units with newer trains.

The first of the extended trains entered traffic on December 12 2014 (November 6 2014 was the actual launch for the first five-car in service). They will initially work on the East London Line (ELL), with 12 now accepted and available for service as this issue of RAIL went to press.

Work to extend the trains is being carried out at New Cross Gate.

The vehicles, delivered from Derby by DB Schenker, are Motor Standard vehicles. These are of the ‘378/1’ variety, which are exclusively DC-powered and so can only work on the ELL and South London Line (SLL).

They will be followed by the dual-voltage Class 378/2s, which will work on the North London Line, West London Line and DC lines from London Euston. The latter can only be done when the power supply is increased.

Introducing the new trains increases passenger capacity by 25%, with an extra 170 passengers able to board the extended ‘378s’.

The project is worth £320 million, including the train extensions and associated infrastructure work.

The improvements on the LO network from the mid-2000s have been dramatic, with performance improving all the time. Recent passenger satisfaction scores were 91%, while in September and October 2014 LO recorded 95.7% of its trains arriving at their destinations within five minutes of the scheduled time. (The national average is 90.1%.)

The ELL has even spawned a social network offshoot, in the form of the affectionately named ‘Ginger line,’ where people can meet and dine at locations along the route.

When launching the longer trains, London Mayor Boris Johnson said: “With punctual services and an ever growing number of passengers, I think it’s fair to say that London Overground has been a fantastic railway success story.

“Adding an extra carriage to the trains that criss-cross this network will allow more people to take advantage of what is now one of the most reliable and trusted rail services in the UK. As London’s population continues to rise, it is investment in our transport network like this which will help to keep London and its economy on the up.”

TfL Managing Director of London Rail Mike Brown said: “The ever-increasing popularity of the London Overground network has seen a huge rise in demand. As a result, we are now on course to carry 135 million passengers - nearly four times the number we carried when we took over this railway in 2007.

“To enable us to continue and maintain the high levels of safe, reliable and frequent travel that our customers have come to expect, it is vital that we deliver more capacity by lengthening our trains from four to five carriages. We have set a standard for highly successful rail services, and this is the model we will follow when we take over three-quarters of the rail services out of Liverpool Street station next year.”

Local business groups are also impressed with the impact of the new trains, and with LO’s revamp.

‘The startup businesses in Shoreditch really value London Overground and were delighted to hear about the forthcoming increase in capacity. It will make a significant difference to both staff and visitors, and improve the passenger experience.

“Many people in London only use the Tube network. We think they’re unaware of how regular London Overground services are. We love it!”

Bombardier says the Class 378s are heavily worked. When it analyses the performance of the trains, it is a metro-style performance.

Bombardier admits that five-car is probably the maximum length for the Class 378s, although the design can run in longer formations (such as six-car formations) on metro services. That, the manufacturer explains, alludes more to the six-car Class 377s used south of the River Thames - these are two pairs of three-car trains.

This is the second time the ‘378s’ have been extended, with the Class 378/0s extended from three-car to four-car trains and renumbered Class 378/2s.

There is a need to improve the infrastructure on the Overground as a result of the longer trains. However, there are problems at certain stations. For instance, at Canada Water, Wapping and Whitechapel it is not physically possible to extend the platforms unless the stations are rebuilt.

As a result, this means that the five-car trains will need selective door opening so that the last set of doors will not open. There will be announcements and passengers will be able to walk through the train. This will also be made possible as the trains have wide gangways, as per other recent Bombardier products such as the S-Stock being introduced on the London Underground.

Transport for London says that the platforms at Whitechapel will only be extended when the Crossrail works at the station are completed.

Other infrastructure requirements include building new stabling facilities at Silwood, in southeast London, and at Wembley. The existing Overground depots at New Cross Gate and Willesden are being extended, while platforms on the NLL and SLL routes are being extended. Track and signalling will also be upgraded.