Fifteenth anniversary of the Class 66 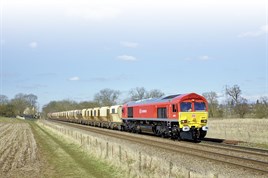 The first Class 66 arrived in Britain on Saturday April 18 1998. It has since been joined by 451 more and they have become a vital part of the British freight industry.

With only one write-off in their history to date, these robust locomotives steadily took over the duties of older, less efficient classes to dominate the railway’s freight workings.

The revolution began with EWS (now DB Schenker). The company needed to upgrade its fleet of increasingly unreliable locomotives that it had inherited from the takeover of five British Rail freight companies (Loadhaul, Mainline, Rail Express Systems, Railfreight Distribution and Transrail).

The company wanted a more modern version of the Class 59, capable of hauling freight trains at 75mph, fitting into the Route Availability 7 category and with a high fuel capacity.

General Motors Electro-Motive Division (GM), which designed the impressively reliable Class 59, designed the new ‘66’ to use the same underframe and cabs as the ‘59’ with only minimal improvements.

GM settled on a Co-Co wheel arrangement, meeting the British loading gauge, to shorten the certification process. After much consultation with EWS, it was decided that the ‘66’ should have the SD-70 engine type but with an upgrade of the then-new SD-80 electronics.

One of the features that make ‘66s’ so successful is their steerable bogies. They were the first UK locomotives to be fitted with the High Traction Radial Bogie (HTRB) type, which steer the wheels into a curve to reduce the force on them, improving ride quality and reducing flange wear.

The first built, 66001 was moved to Albany, New Jersey and loaded onto Jumbo Shipping’s MV Fairload, which set sail for the UK on April 1 1998, docking at Immingham just over two weeks later, on April 18.

The locomotive was then moved to Immingham depot to be unveiled to the press and a week later towed to Toton to be thoroughly checked.

Following further tests at Derby, 66001 returned to Toton, from which it hauled its first train to Buxton and back on May 27 to perform final testing ahead of its first revenue-earning trip on June 2.

It was accompanied on its maiden voyage by 58049 for insurance on its Bentwick-Drakelow coal train.

With testing proving positive, GM started work on the first batch of 248 production locomotives and, by mid-June, 14 had already been laid out, with 66003 and 66004 almost complete.

On July 3, 66001 was moved to Cardiff Canton for staff training. With the rest of the class due for delivery into Newport Docks, it was necessary to train local fitters there.

With efficiency at the heart of EWS’ plans, testing on the rest of the batch would be completed before they were loaded onto Jumbo Shipping’s vessels (which could transport up to 11 ‘66s’ at a time) so that only routine checks and fuelling were needed when they arrived. This meant they could be sent straight into traffic once they were unloaded.

Railtrack granted full type approval on August 14 1998, meaning that 66003-005 could be delivered on August 26. 66002 was kept in America for testing for a year, which is why it did not come over with the second batch.

66004 hauled the first solo revenue-earning train on September 4 from Bescot to Longport, but it also became the first of the type to be involved in an incident when it derailed in Bescot Yard, all the wheels on one bogie coming off the track.

The following year, on January 14 1999, 66014 hauled a high-speed freight train to test how much a Class 66 could haul at 75mph. It ran from Wembley to Mossend with a rake of former National Power hoppers. It passed the speed test with flying colours.

Five days later, on January 19, 66016 became the first of the class to be hired to haul a passenger train when Virgin hired it for a Shrewsbury-Euston service after 47709 failed near Wellington.

The reliability of the ‘66s’ had dipped slightly by this point but by February 28, 66080 entered the country and made record time for entering traffic in less than 24 hours.

Other freight operators started to notice the shift EWS had made to ‘66s’ and Freightliner became the first to follow suit, with an initial order for five locomotives in March 1999. The company had originally been unsure about ordering ‘66s’ because GM’s contract with EWS meant that they could not promise delivery until early 2000. Freightliner was already using GM products having had 12 Class 47s converted to Class 57s with GM engines. This was seen as a cost-effective solution to improving the dire reliability recorded by its ‘47s’ but in the end it opted for ‘66s’.

But Freightliner knew that there was no viable alternative and managed to negotiate a deal whereby its five locomotives could be produced alongside the EWS order.

The five were bought by Porterbrook Leasing and leased back to Freightliner, which was then responsible for the maintenance of the locomotives going forward. GM agreed to deliver the five by August 1999, by increasing production so that the company did not delay its commitment to EWS.

EWS staff had begun to complain about the cab noise, rough ride and coolant leaks of the ‘66’ and the company started collecting data on the problems, especially the ride quality considering the radial bogies were supposed to reduce the contact between the wheel and the rail and therefore produce entirely the opposite effect.

The cab noise was improved by adding a soft headlining to absorb sound and by fixing loose panels. The coolant leaks were caused by vibration in the pipes from inferior moulds that, once replaced, combatted the problem.

The first Freightliner locomotive was then delivered on June 1, numbered 66501. Even before its delivery, the company was looking to order another 15 locomotives as it had won a contract with Railtrack and it was anticipated that 18 of the 20 it would then have would be in use on infrastructure trains for Railtrack, leaving only two available for intermodal traffic. This order was worth £23 million and was again a lease-back deal where Forward Trust Rail bought the locomotives and leased them to Freightliner.

Deliveries of the class continued steadily and other freight operators started noticing the benefits of the ‘66’ and that they could use lease-back deals to obtain them.

In 2000, GB Railways, the parent company of the passenger operator Anglia, moved into the freight market with a £12m order for seven ‘66s’. These became ‘66/7s’ and, like the ‘66/5s’ were identical to the ‘66/0s’. GBR was to use these for its recently set-up freight arm, GB Railfreight (GBRf), which had won a deal with Railtrack to supply seven brand new locomotives to move infrastructure trains in Anglia and the south east. It was this type of innovation that has since seen GBRf grow to become the third largest freight company.

The first major modification however, came when six of Freightliner’s order, arriving on November 10 2000, became ‘66/6s’, with a lower gear ratio and a higher tractive effort than others in the class. They were intended for use on heavier block trains so they also had a lower maximum speed.

The next year, on February 28 2001, the Heck accident in which ten people died when a GNER train hit a car and collided with 66521 (only nine weeks after it had entered traffic) caused the only write-off so far in the history of the class.

On March 13 2001, the first of GBRf’s locomotives, 66701-707, were delivered and allocated to Willesden. Over the next six months, GBRf and Freightliner continued to increase their use of the class and both companies ordered more locomotives to meet demand.

January 2003 saw another freight operator turn to the ’66’. Direct Rail Services had originally used Class 20s and later ‘33s’ and ‘37s’ but the company was expanding its operations and new locomotives were needed to compete in the intermodal business.

Originally DRS ordered ten locomotives to be leased from Porterbrook. Because the delivery of its ‘66s’ could not be made until October, the company struck a loan deal with GBRf for 66711/712 to train staff and perform trials with the new class.

The ten locomotives ordered by DRS were some of the last of this type of ’66’ that could be ordered. International Union of Railways (UIC) regulations stated that all locomotives ordered after December 2002 would need modifications to their cooler groups to meet new emissions requirements. This new rule meant that 53 Class 66s were added to the production queue 0n December 31 2002 - in a single day!

GM had already developed a low-emission version of the ’66’ engine partly by making changes to the engine cooling system to allow it to run at a lower temperature. Modified fuel injectors and pistons and bigger radiators were required and the fuel tank reduced to meet weight restrictions.

After much discussion about the classification of the new low-emission version (EWS wanted to classify them as Class 68s but the Rolling Stock Library disagreed) they were classified as 66/9s. The first two low-emission 66s became 66951/952.

On March 16 2006, the 100th Freightliner locomotive was delivered along with 66622 (the last of the original specification before low-emission requirements).

Drivers’ union ASLEF had been campaigning for improvements to driving conditions in the ‘66’, particularly to combat the excessive heat in the cab. In June 2007, GBRf unveiled its first ‘66’, 66708, with an improved cab layout. It included a new ‘Grammer’ spring-fitted pneumatic seat to reduce vibration and improve comfort, and a cab cooling system.

In September 2009, GBRf then tested an air-conditioning unit that reduces cab humidity and maintains the temperature at a level the driver can control. The system was fitted to 66732, owned by Porterbrook.

June 23 2008 saw the delivery of three ‘66s’ for Fastline Freight, which was the fifth operator to take delivery of the class. The company eventually had a fleet of six but in 2010 when it became bankrupt, DRS took on all of its ‘66s’ (one of the six being hired out from the company to Fastline). They were among the last examples to be delivered from EMD.

In a similar story, Advenza Freight leased four ‘66s’, 66406-409, in May 2009 from Porterbrook. These were re-numbered 66841-844. The decision was made despite an economic downturn and both Freightliner and DB Schenker experiencing a decline in traffic and by October that year Advenza had gone bust and the ‘66s’ were returned to Porterbrook.

Colas Rail then became the final freight operator to join the ‘66’ club when it leased these three locomotives from Porterbrook in October 2009 to use on intermodal and flyash trains, allocated to Tavistock Junction. Another two locomotives - 66844/845 – joined them, which were later passed on to GBRf in 2011 and replaced with five from Freightliner.

Since 2011, Freightliner has exported 13 ‘66s’ to Poland, all of which underwent modifications to allow them to operate there. DB Schenker has also exported ‘66s’ to Poland.

In November 2012, GBRf bought three unused Dutch ‘66s’ to join its fleet, all of which will require their roof-mounted air-conditioning units removing to fit UK loading gauge. They will also need to be fitted with UK signalling and safety equipment.

It certainly seems though that the Class 66 revolution continues, even on their 15th anniversary, with no sign that they’ll be phased out anytime soon. Still the dominating force in the rail freight industry, we may yet see more in UK with freight companies buying in foreign locomotives.