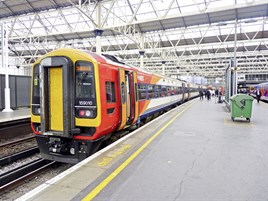 Catch a train for London at Exeter St Davids, and you can leave the Devon station in two completely opposite directions yet still arrive at the capital on a direct service.

The trains heading north before swinging east are more heavily used, because they take only around two hours and use High Speed Trains. They are operated by First Great Western, and serve London Paddington.

The trains heading south before taking an immediate sharp turn eastwards take around three and a half hours and are formed of diesel multiple units (DMUs). They are operated by South West Trains, and serve London Waterloo.

But just because the latter service uses DMUs and takes almost twice as long, it doesn’t mean it is any less important. SWT certainly doesn’t see it that way.

The route it serves is varied. Running through the rolling Devon and Dorset countryside, it provides a vital artery for small villages and towns, connecting with bigger towns on the route. East of Salisbury it is a commuter route for London. Leisure travellers use it, and there is plenty of holiday trade.

The trains used celebrate their 20th anniversary this year, and July 11 marked the 20th anniversary since the route converted to full DMU operation. The first trains entered traffic on March 22 1993, while the depot that maintains them (Salisbury) officially opened on June 11 1993. Initially 22 three-car Class 159s were used, but the fleet has grown through converting Class 158s - there are now 30 Class 159s.

The DMUs replaced longer locomotive-hauled trains, and have improved frequency and reliability.

Class 47s cascaded from elsewhere in the UK had been the last locomotives used on the route, hauling ageing Mk 2 coaches. May 24 1992 had seen the end of Class 50-hauled trains on the line, although poor availability of the ‘47s’ that were cascaded to replace them meant that freight-only locomotives such as railfreight ‘47s’ and civil engineers’ Class 33s also had to be used.

The route was also once home to diesel hydraulic operation, with ‘Warships’ used on the line until their withdrawal in 1972, when ‘33s’ took over. The ‘50s’ arrived in the early 1980s.

It was formerly part of the Southern Region, and trains would run from Waterloo to Exeter and then on to destinations on the North Devon and North Cornwall coast, using the ‘Withered Arm’ route across Dartmoor.

Big express locomotives would power along the line, but today it is a unit-only railway. Locomotives can still be seen, but only hauling freight at the London end of the line. West of Salisbury, unless it is a test train, there is nothing but ‘159s’.

Passengers, however, seem to like the trains - each station has increased in patronage, according to Office of Rail Regulation statistics published earlier this year (see panel).

SWT Engineering Director Christian Roth admits to RAIL that few passengers travel the full distance because of the journey times, although in SWT’s favour the tickets are cheaper. “If people live between Axminster and Exeter, then timewise it is more or less equal to travel to Exeter and use FGW,” he acknowledges.

So what is the market? Roth explains: “Salisbury is easy for London, and there is quite a lot of leisure travel.”

Train formations are, on average, either three-car or six-car formations to Exeter. During the peak periods they increase to six or nine cars between London and Salisbury.

“Salisbury is convenient for splitting and adding trains because it is in the middle of the route,” says Roth.

He adds that train lengths are not increased depending upon demand on any certain day, but that this is possible if required. Coaches can also be removed from traffic halfway through the journey if needed.

One criticism voiced to RAIL from users in the West Country is why the trains stop at stations between Salisbury and Waterloo, and certainly east of Basingstoke. Surely, because other trains on the South West Main Line call there, the ‘Exeters’ can be non-stop?

“It is a very, very busy route in the peak,” says Roth. “That is one reason we currently have a six-car train that starts at Basingstoke. With the HLOS plan we will free ‘450s’ to replace this, and we can then run longer trains to the West of England. There are capacity issues across the network.”

Roth says that in the morning peak no main line trains call at Clapham Junction, but they do stop at Basingstoke and Woking. “The reason is that there are a number of passengers for Reading who change at Basingstoke. It is not for Heathrow, but for the IT and telecoms businesses. There is a lot of business at Woking, too.”

SWT is not the only Stagecoach franchise to use ‘158s’ and their ‘159’ cousins on long-distance trains. East Midlands Trains also has a fleet of 25 Class 158s.

But unlike EMT, SWT has first class, as well as sockets fitted to the trains for laptops. Surely it would make sense to have had the same interiors?

“Our ‘158s’ and ‘159s’ differ because for us they work a kind of express premium product. The EMT premium is the Meridian. It is a different service.”

If the service is a premium, what about fitting WiFi and sockets throughout the trains?

“Sockets are very expensive. It needs a big refurbishment and is an additional cost. You have to ask how much is the cost and the point of it in relation to the time in the franchise.

“WiFi is different. Discussions are underway for the ‘444s’, and there is the possibility of WiFi for the ‘450s’. If you do WiFi on the train, the most expensive part is the Ethernet and additional wiring. So to do that project or use the diagnostics, you need the communication equipment. We have that.” Roth says that the potential is there, but there are currently no plans for it to happen.

No specific team looks after the Waterloo-Exeter line. It forms part of the SWT/NR ‘Alliance’ network as far as Exeter Central, after which the Great Western NR team takes over. There are managers dedicated to looking after the crews that operate the line, but that’s as far as it goes.

“Performance on the line is good,” says Roth. “The big problem is the condition of infrastructure. For the past five years significant work regarding renewals were cancelled or delayed. That did not mean the infrastructure quality deteriorated, but we have to look at the trackside of the route.

“We need to increase the renewals. We will use the winter and the high output train to do track renewal. We know the condition of the track very, very well. The high output train will be allocated to Salisbury and Basingstoke. That track is from the 1960s.”

Freight will be diverted via Salisbury, while the first and last trains between Waterloo and Exeter are likely to be partially replaced by buses. Otherwise, SWT will “pretty much be able to run capacity”.

Adds Roth: “If we do the High Output activity there will be an element of reduced numbers of trains. It affects the first and last train. If trains run on time it will be OK. The high output can only run for six hours - after that you run out of sleepers and ballast. It will need maintenance and loading. You cannot run it continuously.”

West of Salisbury a signalling renewal scheme saw control of the 90-mile section to Exeter move to Basingstoke. The project for this had a 30-month target from inception to commissioning. Development took 20 months, and delivery took ten months.

A project of this scale would usually take 60 months, but the National Operating Strategy business case pushed for two years’ worth of savings within Control Period 4 (2009-2014), and this halved the time available to deliver the work.

Says Network Rail: “This length of railway has never been commissioned in such timescales before, especially with some of the novel applications that had to be developed. Some people said it wasn’t possible - this inspired the team to prove them wrong.”

An emphasis on teamwork helped to make it happen. The team built for the project was also inexperienced, but their enthusiasm, enjoyment and sheer determination vastly helped the project, says NR.

Eventually the project cost £21 million instead of the budgeted £30m. A more modern, safer and reliable signalling system with capacity for future improvements was commissioned, with operational and maintenance savings of more than £1m per year.

Three Solid State Interlockings (SSI) replaced the previous signalling that had been installed in the 1960s and 1980s. Previously the route was controlled by signalboxes at Gillingham, Templecombe, Yeovil Junction, Chard Junction and Honiton, while there were gate boxes at Sherborne and Feniton. Eighty-two lightweight LED signals were installed using existing signal posts.

Roth says there are currently no plans for additional work on the West of England Line. “We have done a lot work there. The next Control Period is about sorting out the Waterloo end of the line. We want to be running more ten-car trains into Waterloo.”

In RAIL 728, Richard Clinnick goes behind the scenes at Salisbury depot, to find out how the Class 158s and 159s are maintained and achieve such consistently high performance figures.

A look back to plans for deployment of modified locomotives across former Southern Region to retrieve stricken electric multiple units. RICHARD CLINNICK reports