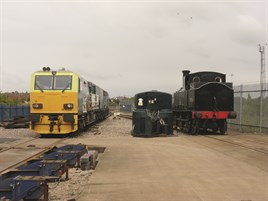 York has always had its fair share of interesting railway moves. Any major station on the East Coast Main Line that has large yards, a depot and a railway works will always attract the weird and wonderful, as well as the more mundane, everyday traffic.

The yards and depots may have vanished, but the city still witnesses the weird and wonderful moved by rail, courtesy of the National Railway Museum and its collection of exhibits.

Recently there has been an increase in the number of these moves. And it’s all because of Railfest, the biggest event of its kind since 2004.

One man, Rail Operations Co-ordinator Matthew Ellis, has been key to it all. As head of the operations team, it is Ellis who has liaised with the companies carrying out the moves and supplying exhibits. He has also been responsible for overseeing the intricate shunting manoeuvres required to ensure the correct exhibit is in the correct location.

Ellis has been with the NRM for five years, working his way through the ranks. A competent driver and fireman, he can set his hand to all tasks and certainly is not afraid to get his hands dirty. He can always be found ‘at the coal face’ alongside other NRM staff, ensuring everything is where it needs to be.

This requires both precision and the co-operation of many parties, including Network Rail (NRM exhibits need to run on some of the national network as they are shunted around the York site), while West Coast Railway Company supplies drivers for the main line moves.

Many of the smaller exhibits that ventured to York were moved by road, arriving by the middle of May. The larger main line-certified examples started arriving by rail and road from May 15.

Almost all had a date with royalty, with the NRM’s main line-certified 47798 Prince William booked to shunt the locomotives to and from the museum. However, this was scuppered for a period after the Class 47 derailed during shunting.

It wasn’t badly damaged, but the need for a locomotive saw West Coast Railway Company come to the rescue, with 33207 Jim Martin taking over the role for a few days.

The Class 47, one of two dedicated to haul the Royal Train for many years, is dual-braked - this means it is able to haul trains fitted with either air or vacuum brakes, making it an incredibly useful tool for this shunting work. The ‘33’ is also dual-braked.

On May 15, the ‘47’ was dispatched to York’s former works to collect two steam locomotives - Webb ‘Coal Tank’ 1054 (which had arrived from the Keighley & Worth Valley Railway) and London, Brighton and South Coast Railway ‘A1X’ 55 Stepney (from the Bluebell Railway).

This was the first in a series of complicated moves that entailed the following: a WCRC driver taking the ‘47’ from the NRM depot next to the ECML to the NRM’s South Yard, to collect a wagon and the museum’s 4-COR electric multiple unit that was being moved by road to Shildon.

It would then haul them to the Old Carriage Works (now Network Rail’s Holgate site), running out of the NRM yard and over the Slow Lines into the Down Departure sidings, then setting back into the Works yard.

There, the two steam locomotives, carefully unloaded from their road transport, would be collected, and the ‘47’ would take them back to the South Yard (this would involve the reverse of the outward move).

Well, that was the plan, before the failure of the ‘47’ resulted in the ‘33’ being used instead.

Whatever route was chosen, NRM moves must also wait for paths (spaces between scheduled main line trains). And in a busy area such as York, with its many different routes converging as well as a mixture of express, local and freight services, that can often mean a long wait.

Many other vehicle moves were connected with Railfest, and these too often featured complicated moves and convoys.

Devon and Cornwall Railways agreed to part sponsor moves, and started by taking the NRM’s prototype High Speed Train power car, 41001, to Neville Hill depot in Leeds, for the start of a restoration that will ultimately see it hauling trains again (see pages 44-47).

DCR returned the power car to York as part of a convoy that also included two of its own locomotives and a preserved Class 50. This ran on May 29, and saw DCR 31601 haul 50008 Thunderer from Washwood Heath to Neville Hill, where they then collected 41001 before heading north to York.

Also on May 29, Direct Rail Services sent 20312 from Carlisle Kingmoor to Tees Yard on a booked freight train, before the ‘20’ - the oldest main line-certified example of its Class - then ran south to the NRM.

Plans were originally in place for it to travel from its Ruislip home to York via the Great Northern/Great Eastern Joint Line through Spalding. In the end it was collected by four Class 20s on May 31, the ‘20s’ having delivered the latest London Underground ‘S-stock’ trains to Ruislip.

The ‘20s’ then dropped Sarah Siddons at Ferme Park, where it was collected by 66744, which was also hauling 92032 to York. Because 12 Sarah Siddons is limited to being towed at 50mph, the convoy ran overnight, arriving at York just after 0700 on June 1.

The LU locomotive is powered by the Underground’s electric system, so could not be moved under its own power. As a result GB Railfreight, which was also exhibiting vehicles at the site, agreed to move the vehicle as part of its work on the LU.

Network Rail was also incredibly generous by agreeing not to charge track access for any of the moves. This substantially reduced the financial burden on the NRM, and enabled some of the strange but fascinating moves to occur - a classic example of the railway working together and ‘going the extra mile’ to help the biggest rail event of the decade.