A benchmark for inner suburban trains 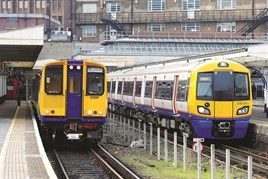 Rail travel in London is changing. There is significant investment in improving the service on oft-forgotten routes. New lines and stations are being built, and new trains are being introduced to replace the elderly Class 313s that have faithfully served the area for many years. As well as the North London Line (NLL), the DC routes from London Euston to Watford Junction have seen ‘313s’ used, along with the Clapham Junction-Willesden Junction line services.

The train interiors were not the best in terms of quality compared to newer designs, while the trains could also be quite intimidating late at night.

London Overground (LOROL) introduced its first Class 378 on July 13, after months of testing. The ‘378s’ are dual-voltage Electrostars built by Bombardier. Transport for London ordered them while Ken Livingstone was mayor. Bombardier is building the fleet of 54 at Derby Litchurch Lane. They are for the Overground operations which are controlled by Transport for London.

Initially the Class 378/0s are being delivered as three-car trains - they will be increased to a four-car formation next year when Motor Standard Open (MSO) vehicles are built. So far 11 have been delivered, of which all are in traffic. They are based at Willesden depot, and will be maintained eventually at New Cross Gate depot. A further ten four-car Class 378/1s have been delivered to Ashford for testing. These have also been used for tests on the East London Line (ELL), ahead of the first stage of that line opening in May 2010.

The Class 378s have new interiors specifically designed to move large numbers of passengers, and this means removing traditional seats, replacing them with longitudal seating and large areas for standing. The trains have greener methods, too, such as sensors to detect how many people are in a coach and thus whether it needs to expend energy heating a carriage full of passengers. It is a clever train.

A spare is normally found at London Euston, and although TfL says the plan was to introduce the ‘378s’ on the DC route to Watford Junction in December, ‘378s’ have already seen use there, although it is by no means a squadron service. They have also started work on Clapham-Willesden trains, while on December 1, 378014 was unusually at Selhurst. Two more ‘378s’ were visible at Willesden TMD.

The first train RAIL caught was the 1107 Stratford-Richmond. Well, that is what the timetable said, although the passenger information screen (PIS) on the platform at Stratford said it was the 1102! Not a great start, and a small niggle, but nevertheless one that needs ironing out. Yes, the frequency on the line may be four trains per hour (4tph), but surely the PIS and timetables should match.

NLL trains use platforms 1 and 2 at Stratford. This is a new island platform that opened in 2008. It certainly still feels new, and is a good look for TfL. A Class 313 stands spare as 378011 glides in. The turnaround is not long. A healthy load of passengers get off the new train, and an even healthier load get on. The train is full to standing already, and this is certainly not peak-time. Photographer Paul Bigland is travelling with me, and he comments that this is by no means uncommon for the NLL. A regular user of the line, he should know.

Initial impressions are favourable, but it is also a little odd, for the ‘378s’ are very different internally to anything operating on the national heavy rail network - standing in driving vehicle 38111 I can see the other end of the train.

There are no gangways as such because it is fitted with wide vestibules. It is similar to Manchester Metrolink trams. There are no 2+2 or 2+3 style seats - instead there are rows of seats below the windows akin to a London Underground Tube train, and straps hanging from the roof just like there used to be on LU. There are also grabrails throughout all three vehicles, bench seats designed for passengers to perch on, and wide areas near the doors to help passengers get on and off quickly.

The ‘378s’ lack toilets, but then they are not designed for long-distance services, rather as mass transit trains. They take this from Southeastern’s Class 376s, which are very similar, although fitted with standard 2+2 seating.

Departure is prompt, and the acceleration smooth. The NLL is currently being upgraded, but it is by no means a ‘new’ railway, and this means the ride could be bumpy. But it isn’t. The ride quality as we accelerate from Stratford through the massive Olympic developments is excellent - similar in fact to that of the Class 395 ‘Javelins’, and they are operating on a brand new railway.

In the Driving Motor Standard Open (DMSO) 38111, there are 12 bench seats, and 36 standard seats. The doors are situated in the now standard 1/3 and 2/3 positions, and are slightly wider than usual, it appears. They are 58 inches wide, while the vestibules are 60 inches wide. This will therefore increase the boarding and unboarding facility at each station.

The seat backs are 15 inches high, while
the seat cushions are 18 inches wide and
16.5 inches deep. There are tip-up seats in the
Motor Standard Open (MSO) and they are
17.5 inches deep.

The armrests are 2.5 inches wide and
14 inches long. While the standard seats are hard and flat, the tip-up seats are curved.

Each vehicle has three passenger information screens and they tell passengers the operator, destination and next stop. This is very simple, and arguably should be rolled out across the industry. The PIS is supported by computerised announcements. These simply inform passengers the operator and the next stop. There are no inane messages regarding safety, ‘inclement weather’ or the wrong type of ticket; and this is to be applauded. The train is quieter and the experience is not wrecked by announcements that appear to be made purely for the sake of it.

Each vehicle is 20 metres long and 2.8 metres wide. Upon departure from Stratford all the seats were taken and there was about 10 to 15 passengers standing per vehicle. The train travels through the social classes, from the very poor in the East through to wealthy on the western half of the line. Paul describes the railway as “a great leveller”.

The multi-cultural nature of the route is also visible along the line, although all the signs and announcements are in English.

There are priority seats in each row of standard seats, with two on each side on each row. They are near the doors, and are in a different colour moquette to the rest of the seats, being a much lighter shade of brown than the rest. The seats do not have high backs, but are split by solid arm rests that do not move. This means there is no way feet can be put on seats. The seats are sturdy yet comfortable. The low backs do not affect the comfort and besides, very few passengers are going to do the full NLL, which takes a little over an hour.

Each vehicle has five large windows per side, supplemented by two much smaller windows on each side. Inside the carriage, unlike most trains these days where the roof arches upwards, the ‘378s’ have low roofs which appear to bow in the middle.

Each vehicle has two forms of lighting, with two rows of dim strip lighting, and seven brighter circular lights fitted down the centre of the coach roof. This gives a bright, yet not overpowering, light in the carriage.

There are maps everywhere throughout the train, both for the Tube and LOROL operations, while there are also adverts above the seats identical to those on the Tube.

What has become noticeable as the train stops and starts along the NLL (there are 23 stations to serve) is that the air-conditioning bursts into life as the train slows for its stop. This is actually quite noisy, and makes a similar sound to a hair-dryer. Once common on new trains, this had appeared to be eradicated recently.

It is also noticeable that lots of cycles and prams board the trains, yet there is no provision to store these. However, this is not a major problem as the large space between the seats means passengers still have easy access.

The floor on the ‘378s’ is largely smooth through the coach, but raised in the areas around the doors. The doors are slide-doors that are controlled by passengers, and which only open when the buttons are pressed. The mechanism is located by each side of the door and features a simple open and close buttons, one for each method of use. There are no instructions - instead the top button lights up when it is available to be opened. It is a simple method, but it is surprising the words ‘open’ and ‘close’ do not appear. The controls, obviously, do not light up on the non-platform side of the train when it is stationary. There is a beeping noise just before they close.

As a ‘395’ passes through tunnels on High Speed 1, albeit at a much higher speed than
the ‘378’ travels along the NLL, it tends to rattle. However, there is none of this on a ‘378’, which is just as quiet in the tunnels as it is out in the open.

There are no bins on the train, and it is hard to see where they would go. Instead, cleaners board the train at its destination. Personally I would like to see a place found for them - on our train there was rubbish on the floor.

The MSO has the pantograph, but the train is also fitted with third-rail shoegear as it will also use third-rail twice on the NLL journey. The pantograph means the roof is even lower, but tall people will still be able to get through.

The MSO also features two wheelchair berths and six tip-up seats. It has 14 bench seats and more standard seating. Visually it appears longer than the driving vehicles, but the lack of a cab, and the fact that passengers can see right through the train, helps to create that impression.

On 378011 the rear driving vehicle was
much colder than the lead vehicle, despite a guard controlling the doors which meant they were not staying open on what was a bitterly cold day.

Upon arrival at Richmond 378011 will return as the 1227 to Stratford. RAIL caught the 1241 to Stratford, which employed 313119. They are being replaced by Class 378s and warranted a quick comparison.

The seats on the older trains are in bays of four, with little leg-room. The seats were 18 inches wide, 15.5 inches deep and the backs were 20.5 inches high. There was no space for bikes. It was warm, but also noisy on departure.

What was noticeable on this train was that the white panelling will have to be cleaned each night. 378017 was covered in fingerprints. While there are a lot of manual labourers working along the route, indeed there are many railway engineering sites with Network Rail staff, this needs to be addressed. The floor on this train was also grubby, but then this was the first day platforms had been salted this winter because of icy conditions underfoot. LOROL will, hopefully, ensure that these trains are cleaned regularly.

I took the ‘378’ to Dalston Kingsland, where I changd to test 378015 through to Stratford on the 1514 (1427 from Richmond). This was incredibly busy, and the 15-minute journey to Stratford saw the train get only busier and busier. I stood, but it was not uncomfortable like it can be on the Tube, becuase there was plenty of space for passengers.

So what is the final verdict? Simple: these trains are superb. They may seem to be fairly basic with few seats and no bins, but then they are about moving large numbers of people over relatively short distances.

Bombardier has delivered a train it can be proud of, and has really set the benchmark for future designs for inner suburban trains.