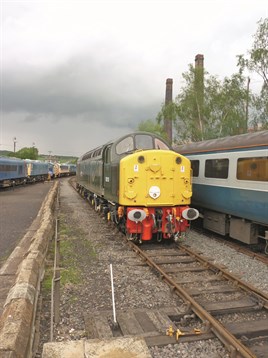 Stand inside 40013 Andania, and the sense of pride its new owners have for the locomotive is obvious. To an untrained eye it appears immaculate, but Shaun Wright points at some dust: “It’s dirty,” he says. “We want this to be right.”

Wright is one of a syndicate of three men who bought the locomotive three months ago, after the Manchester Museum of Science and Industry (MOSI) had rejected it for its collection. Not that MOSI didn’t want it, but at 69ft long and weighing 133 tons it was a bit… big.

It had been left to MOSI by Trevor Dean, who died last October. Dean was a long-term friend of Wright, and of Andrew Lacy and Harry Needle, both of whom have worked on the ‘40’ since it arrived at Barrow Hill a decade ago (and before that when it was preserved at the now-closed South Yorkshire Railway at Meadowhall).

All want to ensure that Dean’s dream for his prized possession becomes reality. And that dream was to see it hauling trains again on the main line.

The ‘40’ had been withdrawn in January 1985, three months after it hauled its last passenger train. Dean bought it in 1988, after it had been used as an exhibition locomotive by the London Midland region, and embarked upon a thorough restoration.

Dean himself worked on the ‘40’, and was particularly methodical. Wright helped with the engineering side, and if he had got his way, it would have hauled trains last year at Barrow Hill. But Dean was adamant that he wanted it working trains when it was ‘complete’, and to his mind it wasn’t.

That it never did so while he was alive brings a sense of sadness to Wright, Needle and Lacy. “All he wanted was for it to go where ‘40s’ used to go,” says Wright. “He would have loved to have seen it powering out of Sheffield.”

And so that is their plan, with Wright leading the project to return it to main line standards. 40013 is already operational, and he believes it could probably haul trains at 60mph in its current state.

But he is not going to let that happen. Instead, the ‘40’ will be overhauled, fitted with refurbished components, and receive significant investment.

Lessons have been learned, says Wright, who has worked on 40145 since its failure in 2010, and watched from afar as other main line-certified locomotives have suffered failures on the main line.

He cites the generator as an example of the care that will be taken.

Wright says that when he started working on the locomotive, it was still in the condition in which British Rail had left it. Since then it has been transformed, and all that remains is to ensure water doesn’t continue to seep in through the roof. Beyond that it is a case of removing components that will be sent away for repairs.

Work will initially focus on its bogies, with an accommodation bogie moved to Barrow Hill from the East Lancashire Railway. When it arrives, 40013 will be lifted and one of its own bogies removed. The bogies will be stripped and their traction motors sent away for overhaul.

Brake cylinders and springs will also be repaired, as will three bogie cracks that also require attention before the ‘40’ can run on Network Rail tracks. The locomotive’s main generator will also be overhauled, along with its compressors.

It will also need fitting with on train monitoring recorders (OTMR) and train protection warning system (TPWS). It is fitted with blue star multiple working, which means it can operate with HNRC Class 20s, but to work on the main line it will need to be registered with various companies’ safety cases. Wright is confident this will happen.

When the overhaul is completed, it may move to the East Lancashire Railway for testing ahead of its return to the main line.

Once it is back on NR tracks, the ‘40’ will be part of the HNRC fleet, but be limited to between three and six trains per year. “We don’t want it working to Scotland all the time,” he says, adding: “There will be a riding fitter with it at all times”.

Wright has worked on the ‘40’ since it arrived at Barrow Hill a decade ago. Although it is operational, he says it will not be released into traffic “until it is right”, adding: “We want to do it properly.”

The work will take place at Harry Needle Railroad Company’s workshops, where the three men work. But unless funded by a third party, it will need to be done ‘outside work hours’.

Wright says talks had been arranged with Direct Rail Services that could see the work paid for in exchange for the ‘40’ working exclusively for that operator.

There will, however, be no exclusive deals with a single charter company. “If somebody has a commercial interest in the project, that will speed it up,” Wright tells RAIL.

He hasn’t ruled out the ‘40’ being hired for stock moves or for snow clearing duties, but says it will not be used for freight work.

It will remain in BR green with full yellow ends, and will not be available for diesel galas at heritage railways. The ‘40’ has been requested for these events, but Wright says these bids will be rejected.

For now 40013 remains at Barrow Hill, where the three men are working hard to ensure that their friend’s wishes are fulfilled.

That Trevor Dean is not there to see his hard work pay off when the locomotive returns to the main line is frustrating for his friends, but they are determined to ensure it happens.

And when it does, they will make sure it is right.