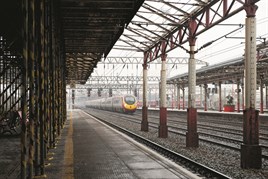 New trains serving a major international sporting event in the UK is nothing new - the start of the Commonwealth Games in Manchester ten summers ago saw the first Virgin Trains Pendolino run on the West Coast Main Line, from Birmingham to Manchester Piccadilly.

Using 390010, it was the brainchild of Pendolino Into Traffic (PIT), which was chaired by Chris Green (then chief executive of Virgin Trains) and Tom McCarthy (West Coast project director). PIT also included senior directors from Alstom (which built the trains), Alstom Signalling, Angel Trains (which owns the trains) and the Strategic Rail Authority.

Class 390s are tilting trains. But ten years ago, prior to the Commonwealth Games, it was recognised that this equipment would need to be locked out of use until the WCML was sufficiently gauge-cleared - the lack of asset knowledge meant that the entire route between London and Scotland had to be measured by hand.

Meanwhile, Alstom had bought the ten-mile test track at Old Dalby, and was using this to test the ‘390s’ once they had been built at Washwood Heath.

The individual vehicles had been constructed at Alstom’s Savigliano plant in northern Italy, before being transported to the Midlands, where they were fitted out and rolled off the production line. A similar process is being planned for Agility’s Intercity Express Programme trains (RAIL 702).

Prior to their introduction, Pendolinos encountered several problems while testing, including interference with signalling cables and relays at some locations. The sheer electrical power of the trains also meant that dampers had to be fitted to the overhead line equipment every 30 miles, to protect the system.

With all this work going on, it became clear that the WCML between London and Manchester would not be ready, so it was decided that the ‘390s’ would make their debut between the Midlands and the North West.

The Pendolinos had been ordered to replace a fleet of locomotive-hauled trains that previously worked trains on the WCML. These locomotives included Class 86s that dated from 1965/1966, as well as Class 87s from 1974/75 and Class 90s from 1987-1990.

Coaching stock was a mixture of Mk 2s and Mk 3s that dated from the 1970s, and which was beginning to age. With a top speed of 110mph and no tilting capabilities, journey times were slower, and the railway was not seen as particularly modern.

Alstom won an £890 million deal to supply brand new tilting trains, and the first bodyshell was completed in time to be displayed at the RAIL/EWS Old Oak Common weekend in August 2000. Bearing in mind that only three years earlier the Virgin bidding team was writing the specification for the trains, this was a fast turnaround. They were ordered as 140mph trains.

Pendolinos had been in traffic in Italy for many years, and were operating in eight other European countries. They were fitted with tilt, which had been tried previously in the UK but with little success, following unsuccessful tests with the Advanced Passenger Train (APT) in the 1970s, when those on board felt sick and drinks went flying as it tilted. The Class 390s’ tilt mechanism was manufactured by Fiat Ferroviara (later bought by Alstom).

VT was a demanding customer and specified seven requirements for the trains, including tilt, a smart control system for the tilt, and high technical service within the saloons (including electronic passenger reservation systems).

It also wanted them to double the power of the Class 87s used on the Anglo-Scottish trains. The power of the ‘390s’ is 6MW, compared with the 2.5MW of the ‘87s’. Power is transmitted through 12 traction motors, and the tractive effort remains constant right up to 125mph.

Regenerative braking had to be included on the trains, and the ‘390s’ regenerate their full power when braking. August 20 2003 saw 390014 become the first AC-powered InterCity passenger train in the UK to operate with regenerative braking.

The safety case was taxing for three reasons:

ν Pendolinos were the first train to include additional European Interoperability Regulation Requirements.

ν New features such as TASS (Tilt Authorisation and Speed Supervision). This ensured that the train’s tilt equipment was ‘locked out’ when the train was not required to tilt, and that ‘over-speed’ was prevented during tight curves.

ν The high number of safety groups that required a certificate. Safety case presentations had to be made to each Network Rail region that the trains ran through.

The last of the seven requirements was reliability. Locomotive-hauled coaching stock achieved 6,500 miles per casualty, but VT wanted 35,000mpc from its ‘390s’, and reliability of the trains remained a problem for many years. When they first entered traffic they could barely reach 2,000mpc.

Modifications prior to the September 25 2004 launch included work on the suspension system, tilt package, and blending of the complex air and electric braking. Some were modified while still on the production line, but others had to be removed from traffic for up to a month to enable the problems to be rectified. This meant that when the timetable was launched, just 42 of the 53 ‘390s’ were ready.

During construction of the trains, VT had already observed that capacity would be a problem. So it ordered additional vehicles, increasing the length of the Pendolinos from eight to nine-car formations. They started being delivered as nine-car trains from 390035 onwards, with the rest summoned back to Longsight for additional vehicles to be inserted.

With the trains running successfully between Birmingham and the Midlands, the operation slowly expanded, and by April 2004 sufficient ‘390s’ were in traffic to enable VT to begin returning the redundant Class 90s to owner Porterbrook, which in turn leased them to ‘one’ (now Greater Anglia).

However, a challenge was laid down by the SRA, which stated that it wanted a full WCML tilting timetable in place by September 2004. This was against a backdrop of a multibillion-pound upgrade of the line that was not complete.

At 1030 on September 20 2004, Sir Richard Branson and then-Prime Minister Tony Blair launched the trains. Blair ceremoniously ‘flagged away’ 390038, which ran non-stop to Manchester in 1 hour 53 minutes, achieving an average speed of 101mph.

As the old order gave way to newer electric multiple units, it became clear that there was insufficient capacity.

In August 2008, following a tender process, Virgin Rail Projects (VRP) won a £255m deal to provide extra coaches for the Class 390s. VRP’s deal supported the design, manufacture, delivery, testing and commissioning of the new vehicles, and was supposed to carry through until the originally intended end of the VT franchise on March 31 2012 (RAIL 598). The VT deal was then extended to December 2012.

As part of the VRP deal, four new 11-car Class 390s would be built, while construction of a further 62 Standard Class coaches would enable 31 of the existing 52 nine-car trains to be increased to 11-car formations. The Department for Transport had previously rejected VT’s offer to lengthen all the trains in return for a two-year franchise extension.

VT originally wanted the additional vehicles in place at the end of 2008. There was also an option for a further 42 vehicles by early 2013 to make the remaining 21 nine-car Class 390s 11-car trains, but neither happened.

However, it had not been agreed who would use the train. Earlier that year, the DfT and Alstom told RAIL that the 106 new vehicles would be stored until the start of the new West Coast franchise (RAIL 647). And when the new train arrived, Rail Minister Theresa Villiers said it was “available for use by any train operator who wants to increase the service they provide for their customers”.

This led to speculation that East Coast would use it, the operator having told RAIL the previous summer that it wanted to use a Pendolino on a daily Glasgow-London train.

It eventually entered traffic on July 16 2011, working the 0715 Manchester Piccadilly-London Euston, although it initially ran as a nine-car train.

The next few months saw the next three brand new ‘390s’ arrived, with 390057 the last to enter the UK on April 5 this year. By that time, 390054/055 were in traffic, although they were initially banned from running on the same line, because their insurers feared they might hit each other! (RAIL 689).

The first converted 11-car Pendolino to enter traffic was 390156 on April 5, working the 0748 Liverpool Lime Street-London Euston. Since then more have started working. The first of the ‘original’ batch of 53 to enter traffic as an 11-car train was 390107 Virgin Lady.

The extension work is being carried out as part of the H3 overhaul project, which is completed when the trains have recorded two and a half million miles in traffic.

The 53 original trains are being overhauled at Longsight (Manchester). This part of the project concludes in April, after which 390154-157 will then undergo their H1 overhauls (carried out after running 750,000 miles in traffic).

When the H4 overhauls are carried out in a couple of years, then the H1 work will be undertaken on the new vehicles and the new trains. The H5 overhauls (in about five years) are described as similar to the H2 work carried out in 2010, and will allow the trains to be “in sync”, according to Alstom H3 Project Manager Lee Kinsey.

Alstom is contracted to deliver 48 trains per day, seven days a week. Says Bentley: “We don’t park them during the day. This is an 18-hour railway. It has to be a fast, rapid-reaction railway.”

Bentley admits that the ‘390s’ had reliability problems in their early days, but says the engineers looking after them have different priorities now.

“It is about how we have moved from engineering to a core team that is bothered by air-conditioning not working. Now we understand that the service provision is important,” he says.

Provided 48 of the 56 trains are serviceable, then VT can run its Very High Frequency timetable on the WCML. And Bentley believes availability could increase, stating that “50 or 51” trains could be available each day for the start of the new franchise.

If the passenger growth seen during the Pendolinos’ career continues, they will be needed. In 2002, the WCML carried 12 million passengers, now it is 30 million. He says each train will complete 320,000 miles per year. By contrast, East Coast’s Class 91 + Mk 4 sets work 250,000 miles per year.

During the H3 programme, 1.3 million components are exchanged, and several components are removed for the very first time, including the couplers, brake calipers and tilt system.

Alstom has spent £3.7m to carry out this work. And the scope of the work is impressive. Each train has 18 bogies, and these are overhauled in five days at a rate of 166 minutes per bogie. The manufacturer has refurbished one of the sheds to allow 11-car trains to be lifted as a complete unit.