FROM THE ARCHIVES: ‘Old trains’: a national disgrace or shoddy journalism? 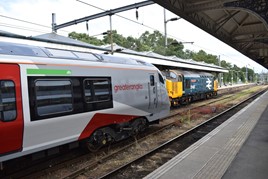 The period between Christmas and New Year is often quiet for newshounds, meaning easy headlines are a godsend for the press.

And so those claiming ‘Stats reveal old trains’, printed just before the usual fares rise announcement and amid the ongoing Southern strike, certainly helped to fuel the seemingly anti-rail agenda.

On December 28, various news outlets ‘broke’ the story that the average age of Britain’s train fleet was 21 years old. Of course, this followed other stories about the ‘Christmas Chaos’ caused by most of the railway being shut and Network Rail carrying out engineering work; but not much of that made the news.

What was not mentioned was that the ‘age of the train fleets’ figures were published by Office of Rail and Road (ORR) on October 26 (RAIL 813). Instead, they were simply used as a stick to beat the railway with.

In The Guardian on December 28, Ed Cox, the director of think-tank IPPR North, said: “It is little wonder that Britain lags behind other developed nations when commuters pay through the nose for decrepit trains. Northerners in particular will be familiar with Pacer trains, which leak whenever it gets wet. This is a national disgrace and just not what you’d see in Germany, France or Japan, or even down south.”

But is that actually right? What is ‘down south’? And where is the context?

Northern Managing Director Alex Hynes has made no secret of his determination to remove Pacers from traffic. Indeed, it is one of the commitments written into the Arriva-owned franchise that the Class 142s and ‘144s’ must be withdrawn by 2020. Hynes has regularly suggested at conferences that he will invite people to watch them be scrapped.

Cox fails to mention that of the franchised operators, northerners will travel on the youngest fleet, which is TransPennine Express at 9.5 years. TPE, itself, is introducing a brand new bi-mode fleet in 2019, a brand new locomotive-hauled fleet in 2018 and a brand new electric multiple unit fleet in 2019 as it expands its operations and vastly increases its capacity. The majority of its three-car Class 185s that date from 2006-2007 are being replaced by the new trains.

But what of other fleets used by ‘northerners’?

Merseyrail has the second oldest at 37.3 years, but these are being replaced by 2020 (RAIL 817) in a deal that involves more capacity again.

Northern has the sixth-oldest fleet at 27.2 years. Above it are TfL Rail and Great Western Railway, both of which are ‘down south’, and both of which are also receiving new trains, although in the case of GWR they are not what was expected, and will force the operator to retain older trains.

For Northern, the 14x fleet is being withdrawn, and older Sprinters replaced. Arriving from 2018 will be Class 170 Turbostars, but more importantly new diesel multiple units and new EMUs will be delivered as the operator looks to improve its offering for passengers.

Of the 20 operators included in the ORR statistics, eight are not scheduled to receive new trains. These include Arriva Trains Wales, where the average train age is 25.4 years, and East Midlands Trains (24.3). Both are about to be re-franchised, and while the Welsh Government is making positive noises regarding a new fleet, questions remain regarding the electrification of the Valleys that would surely be the catalyst for any new order.

For EMT, the wiring north of Corby on the Midland Main Line route looks to have been kicked into the long grass, and local campaign groups are now calling for new bi-mode trains rather than second-hand cast-offs. RAIL sources suggest that cascaded trains are likely to move to the MML, with Class 379 Electrostars from Greater Anglia, refurbished Class 321s from GA or, indeed, locomotive-hauled sets, all mentioned in passing.

Chiltern Railways’ fleet is 19.8 years old and there is no sign of new trains. CR has the twelfth-oldest fleet, but has recently introduced brand new Class 68s hauling Mk 3s dating from the late 1970s and early 1980s. They have boosted capacity in a franchise that has benefitted from long-term stability, and also major infrastructure improvements.

CrossCountry’s fleet is largely made up of Class 170s dating from 1997 onwards and Voyagers built in 2001-2002. There are five High Speed Trains, but there are no plans for new vehicles before the next long-term franchise is let in 2019.

On Southeastern, the newest trains are the Class 395 Javelins, introduced for High Speed 1 in 2009, and which were first delivered to the UK in 2007. The rest of the fleet is made up of Electrostars dating from 1999 until 2006, and Networkers dating from the early 1990s. Again, there are no plans yet for replacements, but this is the next operator to enter the franchising process.

London Midland is currently being bid for, and there are likely to be new trains, but the operator has benefitted in recent years from new Class 172 DMUs and Class 350 EMUs; RAIL understands that, like EMT, new trains are being considered, as well as cascaded fleets from elsewhere.

The final TOC not to have plans for new trains is Virgin Trains West Coast, although its fleet dates from 2002 when Class 221 Voyagers and Class 390 Pendolinos were introduced. These were supplemented by four new ‘390s’ in 2012.

Cox’s comment about ‘down south’ doesn’t resonate either. While most operator’s fleets aged by 1.0 years, London Overground shot up by 9 years from 4.7 to 13.7. This was a result of taking on veteran Class 315s and Class 317s when LO took over running Metro routes from Abellio Greater Anglia. This figure will drop in 2018 when new Class 710 EMUs enter traffic, but until that point, the age will continue to rise.

ORR statistics show that regional trains overall are aged 23.7 years, and had the highest increase in a year – 1.1 years. This is largely due to TPE losing ten Class 170/3 vehicles to Chiltern Railways (dating from the early 2000s) that were replaced by Class 156s sub-leased from Northern (dating from the late 1980s).

Nevertheless, the age of long-distance trains will drop during 2017 as Intercity Express Programme (IEP) Class 800s are introduced by Great Western Railway, and will continue to drop as they replace HSTs with both GWR and Virgin Trains East Coast from 2018.

London and South East has the youngest fleet at 18.9 years, with a 0.8-year increase.

As for the future, ORR points out that the average age of rolling stock is forecast to fall from 21 to 16 between now and the early stages of Control Period 6 (2019 to 2024). This is from the Long Term Rolling Stock Strategy. The cost of the new vehicles being delivered exceeds £7.5 billion.

If the fleet remains unchanged, then the ORR expects the average age to increase by one year, each year.

The figures include passenger vehicles leased by rolling stock leasing companies (ROSCOs) and other financiers, but excludes vehicles such as locomotives and Driving Van Trailers.

Operator  Number of vehicles Due