FROM THE ARCHIVES: The future face of franchises is shrouded in uncertainty 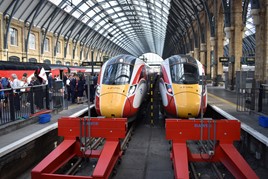 Change is coming to rail franchises. Quite what is open to question.

Until now, franchising has been relatively simple. The Department for Transport or Transport Scotland runs competitions for a group of services roughly along the lines of the train operating units created by British Rail in the run-up to privatisation. They score bids on the ideas they contain and the premium offered or subsidy needed. The winner then runs trains for a set period.

In general terms, this system has worked. In the 20 years since privatisation, just four franchises have failed. The problem is that three of those failures were running inter-city services on the high-profile East Coast Main Line. Two failed because the winning operator didn’t attract the growth it thought was there.

Hard then to blame Transport Secretary Chris Grayling for saying he doesn’t want to franchise East Coast in the same way again. After all, that’s one of the definitions of madness.No one knows what Grayling does want to do, although he shared with MPs in late July some of his initial ideas: “I think there are benefits from public-private partnership. We are not intending to sell off this railway lock, stock and barrel. Its future will be as a public-private partnership. It will not be a fully private company outside government with no state involvement at all.

“My aim is that it should be public-private partnership, but in a different form than has taken place up to now. The example would be bringing in private capital to invest in digital signalling as part of the partnership, and an employee stake in the business. These are the things we are working through now.”

He admitted that East Coast was not the ideal place to try creating a track-train partnership. Current train operator LNER is a minority user of the route, which is a busy mixed-traffic railway. Thameslink and Great Northern (both part of Govia Thameslink Railway) run outer and inner-suburban trains at its southern end (Grayling talks about switching Great Northern services to be part of LNER). East Midlands Trains scoots between Peterborough and Grantham. North of York, there are plenty of CrossCountry and TransPennine Express services. The line is also a key route for freight operators.

Putting LNER in the driving seat on a line upon which so many operators depend will need many safeguards for those other operators. But Grayling is pursuing his ideas because circumstance has returned LNER to the public sector.

“It is common sense that the more we can integrate the teams so that they work together, the more likely the railway is to be able to respond properly to the challenge it faces,” he told MPs.

“What we have to establish with the East Coast partnership is exactly what form it should take legally. What I really want on the East Coast is somebody in charge able to take decisions about planning maintenance works alongside the interests of passengers, and to make sure that the two fit side by side, and dealing with problems when they arise so that services get back to normal as quickly as possible. It is about creating a joint approach to the running of the railway, given the pressures on it.”

Knitting track and train together will need Network Rail to trust its local managers more than it has to date. It has talked about devolution, but remains very centralised - not least with its Infrastructure Projects (IP) division that has been responsible for many problems in recent years.

It was behind the engineering overruns that blighted passengers at King’s Cross and Paddington a couple of years ago. It’s behind the years-late project to electrify the line between Manchester, Bolton and Preston. It’s centralised, but leaves local teams to cope with the problems it brings.

Driving devolution will sit high on Andrew Haines’ agenda, in his role as NR’s new chief executive. Grayling told MPs: “The devolution of Network Rail from a centralised organisation to an organisation of devolved route-based businesses is the essential next step to paving the way for them to create the kind of partnerships the railway needs for the future.”

Haines will need to drive improved performance because there’s a sting in the tail of public-private alliances - such as that seen in Scotland.

In other words, the train operator’s name features for failures of both track and train, while Network Rail isn’t mentioned. This perpetuates the feeling that NR’s idea of an alliance is that the train operators take the flak.

If Grayling takes forward LNER as the name of his proposed partnership between East Coast’s inter-city train operator and the Network Rail routes, he will create a situation where NR can perform badly with no risk to its reputation. And that’s the only risk that has any relevance, because there’s no point DfT fining its subsidiary for poor performance. Private partners will find that ‘heads NR wins, tails train operator loses’ set-up a tough sell to their boards and shareholders.

NR’s alliance with South West Trains failed when the two sides couldn’t agree about money. Civil servants rightly become twitchy at any hint of public money leaking into private pockets. Nor is it reasonable to expect a train operator to subsidise the public side of an alliance beyond what is formally contracted.

Grayling admitted the difficulties of exposing the private sector to NR’s infrastructure risks: “The truth is that the train operators we have at the moment do not have balance sheets that are big enough and strong enough to start taking significant infrastructure risks. The state and/or Network Rail have to stand behind them. However we shape things for the future, it is difficult to see any private entity taking onto its own shoulders the risk of failure of a Victorian rail infrastructure. Whatever happens, the state is going to play a role.”

He continued: “It is not privatising the whole lot. I would not seek to privatise the infrastructure again. The state has a role and will continue to have a role. The state brings strengths and the private sector brings strengths. If you weld them together in a joined-up railway, you probably have the best way of running a railway in today’s world and dealing with its very real operational challenges.”

Alliances expose the difficulties of customers and suppliers trying to act as one. Welding them together, to use Grayling’s phrase, suggests that his civil servants will need to look at how train operators pay NR.

Currently, NR receives most of its money from its grant from government and from the fixed charges that train operators pay. Operators also pay comparatively small variable charges that depend on the type and number of trains they run.

This means that adding extra trains adds little extra to operators’ bills, and the extra train that pushes track capacity to its limit provides little extra income to add to that capacity. Prescriptive franchise contracts mean that train operators can’t cut quiet trains. Britain’s busy network has costs and trains fixed with little room for anyone to manoeuvre.

If Grayling is to look at new public-private partnerships, he should expand his examination to look at the wider problems of funding and using the railway. Privatisation changed everything in the 1990s. Two decades later, it is time to look again.

Grayling has pledged to keep NR in the public sector. That at least fixes one piece of the railway jigsaw. But even a public NR might increasingly rely on the private sector for some of its core functions.

Signalling, for example, could feature its interlocking moved to a remote computer as a leased ‘cloud’ function. Infrastructure Projects could become an independent arm of NR, competing with private companies for work that devolved route managing directors specify. System Operator’s long-term strategic planning and short-term timetabling functions demand some independence from the rest of NR.

Whether Grayling and his department has the capacity for such a radical review remains to be seen while the Government remains fixed by the problems of Brexit. That suggests his public-private partnership idea will become a sticking plaster, rather than a considered look that could endure for another two decades.

A former deputy editor of RAIL, Philip is now a freelance writer specialising in railways. He writes a regular column and analysis pieces for the magazine as well as being a regular investigative writer for RailReview. He is an associate member of the Institution of Mechanical Engineers.