FROM THE ARCHIVES: Northern missed chance to flag timetable concerns 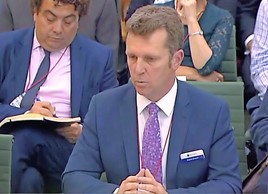 “In hindsight, Northern should have highlighted the timetable problems when it first noticed them,” Managing Director David Brown acknowledged when he appeared before the House of Commons Transport Select Committee on June 18.

Brown was one of two Northern managers and two Govia Thameslink Railway leaders called to give evidence to the TSC, as it investigates what caused the timetable mayhem that began on May 20 (RAIL 854, 855).

Northern has introduced an interim timetable, having cancelled 165 trains (6% of services) per day. It plans to introduce the full timetable where possible from July 29. It still runs more trains than before the timetable change.

“I accept that it may be a criticism that we did not shout louder and earlier in the process. At that point, the task was to rewrite the timetable.

“There is a balance in crying wolf and saying there is a big problem, and being able to quantify exactly what that problem looks like.

“Did we shout really loudly at that point? All the officers in the Rail North partnership were fully aware of the challenges that we faced, but our task was to get on and rewrite the timetable, because at that point it was not clear what the full consequences would be. Plus, the impact of the additional training from Blackpool did not become apparent until April.”

Brown told the TSC the company had been on track to deliver the May timetable, having started the process in July 2017. He said there were more than enough drivers to operate the timetable.

“The big issue for us was that the timetable was predicated on certain pieces of infrastructure being delivered, such as electrification in the North West of England, particularly the axis between Preston and Manchester and out to Blackpool. Our timetable plan was based on that corridor being operated by electric trains.”

This scheme had been due to begin in December 2016, but on January 5 this year Network Rail confirmed it would not be ready for the May 2018 timetable.  This gave Northern 16 weeks to plan a timetable.

Brown said: “We had to look at options for completely rewriting a timetable for the north of England (which is 10% to 11% of the total national rail network) in four months - 16 weeks compared with 40 weeks.”

Northern requested to roll forward into May a timetable that was already in place, but this was rejected by the industry.

“The option we put forward was not accepted by the system operator, Network Rail, or supported by other train operating companies,” he said.

Problems were compounded by delays to the Blackpool electrification. NR told Northern on March 15 that the scheme was three weeks late and would be delivered in late April.

Brown explained: “That meant that 450-ish drivers could all require - and needed - brand new training. That was never in the training plan. That new training requirement was a direct consequence of the delayed electrification.”

This caused further rewriting, and a move of DMUs to cover. New driver training requirements were also needed for Blackpool.

“As soon as you go over the six-month period, drivers are entitled to a significant increase in the amount of training - at least five round trips on the route,” said Brown.

“Bear in mind that our drivers operating in Blackpool come from right across the business. There are people from Liverpool, Buxton, Manchester, Leeds and so on, because ours is such a complex and interwoven network. That training burden was not in the plan.”

However, the problems only truly emerged in the final few days, he said.