FROM THE ARCHIVES: MPs to quiz NR and operators on timetable meltdown 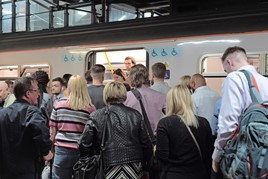 Interim timetables have been introduced by Govia Thameslink Railway and Northern, following the collapse of the planned May 20 timetable plan (RAIL 854).

Meanwhile, Government continues to blame the operators and Network Rail for the ongoing chaos - trains have been cancelled on routes including the new through Thameslink routes, and services on the Windermere line have been suspended until July 1.

Shadow Transport Secretary Andy McDonald tweeted on June 11 that he has written to Secretary of State for Transport Chris Grayling, asking him to provide Parliament with weekly reports of steps he’ll take to sort out the “catastrophic implementation of new timetables, so that MPs and passengers are given full knowledge of the developments”.

And the RMT union has called for Govia and Arriva to be stripped of the GTR and Northern franchises respectively.

The House of Commons Transport Select Committee was due to hold a session on June 18 (after this issue of RAIL went to press), at which it was due to quiz GTR Chief Executive Charles Horton and Chief Operating Officer Nick Brown, Northern’s Managing Director David Brown and Performance and Planning Director Rob Warnes, Network Rail’s System Operator MD Jo Kaye, and NR’s London North Western Route Managing Director Martin Frobisher.

The Rail Delivery Group (RDG) has issued daily performance figures since June 4. However, RAIL Fares and Services Expert Barry Doe explained that this concentrates on the percentage of trains cancelled rather than the number of trains cancelled, and thus hides the fact that no more trains are running now than before the cuts, merely that the timetable is more reliable.

GTR confirmed to RAIL on June 12 that it is planning to introduce an interim timetable with more trains in July, but was unable to say when the full service would be restored.

The operator has removed services in advance from its timetable, rather than cancelling ‘on the day’. It is also understood to be focusing on trying to run trains during the peaks, by rostering drivers and trains to match the busiest services. “This will be in place until a full re-planning of driver resourcing has been completed,” Grayling said on June 4.

Likewise, Northern told RAIL that it has no indication of when cascaded trains will be available, but said it hoped to have a full timetable in place by the end of July.

Its timetable was affected by a three-week delay to the Blackpool electrification project, and by the rewriting of a timetable after NR confirmed the Bolton Corridor would not be electrified in time. However, despite the cancellations, Northern spokesman Glyn Hallam told RAIL that the operator was able to run 300 more services per day than before the timetable change.

On the introduction of the interim timetable, Transport for the North Chief Executive Barry White said: “Northern has taken an operational decision to implement this interim plan. As the operator responsible for services, they believe it is essential to start to stabilise services.

“Our first priority is the passengers - they deserve a service on which they can rely. The voice of passengers and leaders in the North is clear - the level of disruption has been unacceptable, and action taken must deliver improvements.”

TfN Chairman John Cridland said: “As the voice of the Northern civic and business leaders, we call for Northern to ensure any services in total are at least as good as they were before the introduction of the new timetable on May 20, and to provide clear communication to customers so that they can plan with confidence.”

On the latter, passengers have reported being given no information regarding problems at major stations, although there are warnings about strike action.

As this issue of RAIL went to press, RDG said that across the national network, some 21,848 trains were running each day, with 87% arriving on time and 4% cancelled or delayed by more than 30 minutes. It said this compared with the first two weeks of the new timetables, “when 84% of trains arrived as planned and an average of 7% of trains were cancelled or significantly late”.

Specifically on GTR, the RDG said 78% were arriving on time and 8% were cancelled or delayed by more than 30 minutes. It said that some trains were disrupted due to a passenger being taken ill on a train between Streatham Common and London Victoria.

On June 11, RMT General Secretary Mick Cash said: “There is a real danger that the timetable chaos we have seen unleashed across both the North and the South by these incompetent private train companies fades from the headlines, and just becomes accepted as the norm with both Chris Grayling and his contractors let off the hook. It is important that that is not allowed to happen.

“It is clear as day that both Govia and Arriva are in breach of their franchise terms by any reasonable measure, and to allow this shambles to just stagger on is wholly unacceptable.”

Network Rail told RAIL that the Bolton corridor was the worst affected route in the North, with spokesman Grete Luxbacher explaining: “We reviewed the programme in autumn 2017 with rail industry colleagues (including Northern), which recognised the risks of not making the May timetable. This was based on our ability to make significant progress in completing some of the remaining foundations over the Christmas period.

“This was using an innovative sleeved piled design to tackle the areas where we’ve had poor ground conditions.

“While we made progress with steel fitting and cabling works over the festive period, we didn’t see enough improvement in the outstanding foundation work. This is why the rail industry made a collective decision in early January to defer completion until after May. However, within a week of this decision, Carillion the principal contractor for the upgrade, went into administration.”