Between a rock and a wet place… 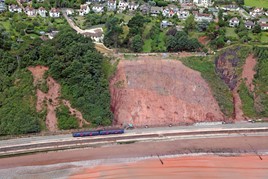 In south Devon, Network Rail finds itself caught between a rock and a wet place - literally. The railway between Exeter and Teignmouth is vulnerable to wave overtopping, and west of Dawlish to cliff collapses as well.

In February 2014, after violent storms, the two came together to shut the link between Cornwall, Plymouth, Torbay and the rest of the rail network for two long months (RAIL 742, 743, 746). Now efforts are under way to strengthen the railway in one of the greatest infrastructure projects Network Rail has ever undertaken.

It can be difficult to visualise volumes, but perhaps this will help. When Network Rail removed 20,000 cubic metres of spoil from collapsed cliffs between Dawlish and Teignmouth after the storms of February 2014, that was equivalent to just under a quarter of the volume of the Royal Albert Hall. If it wanted to regrade that vulnerable cliffside section to prevent any further damage to the Great Western Main Line, it would need to remove at least one million tonnes - more than five Albert Halls.

These are the figures on the mind of Network Rail Senior Programme Manager David Lovell, who is in charge of the resilience programme in the Dawlish and Teignmouth areas. 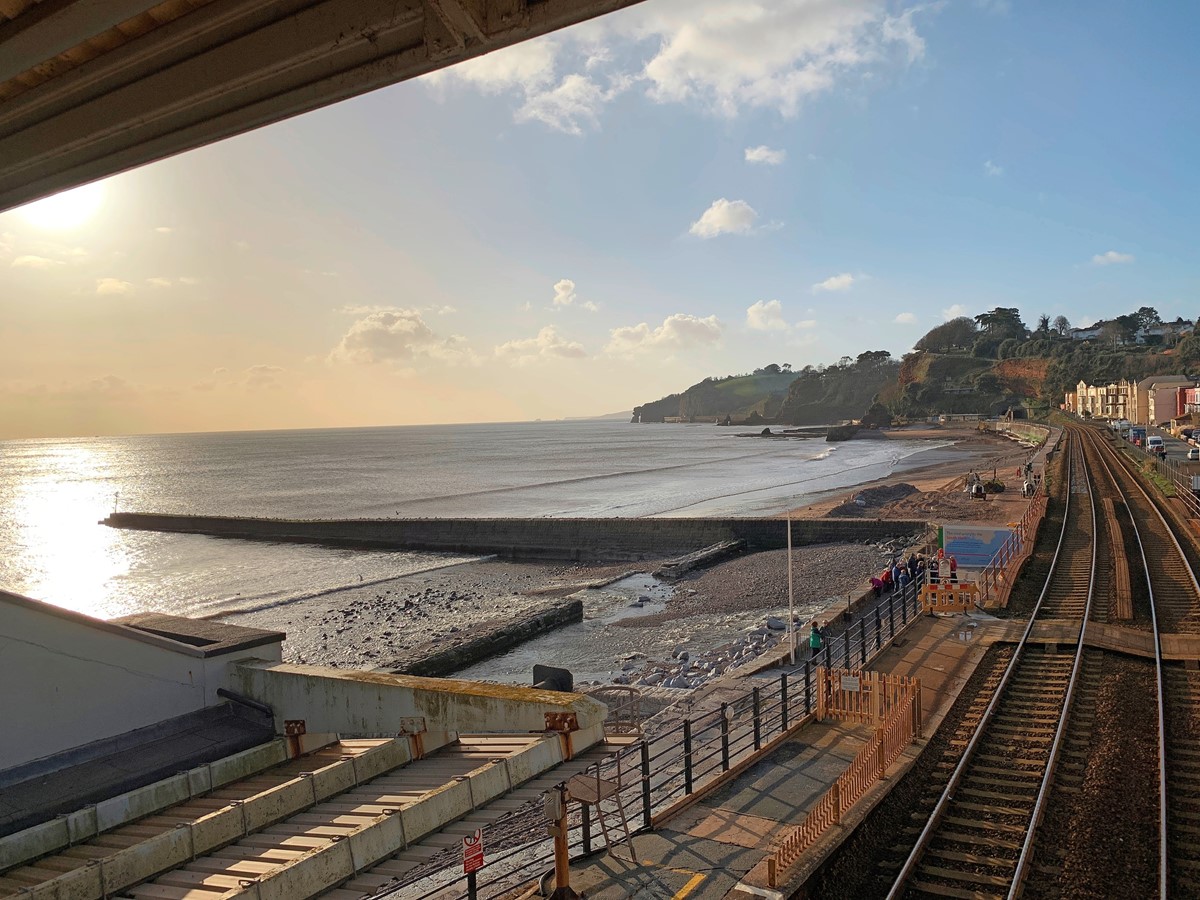 He tells RAIL that to undertake such a regrading of the vulnerable cliffs would require tens of thousands of lorry loads (as the railway at the bottom of the cliffs would have to be closed for many months, if not longer), the loss of land at the top of the cliffs, and the diversion of utilities. The environmental effects would on every level be profound - and the disruption to rail services, residents and the wider South West immense.

But doing nothing simply isn’t an option. Studies show that while wave overtopping at Dawlish is spectacular, the greatest risk to the railway in the area is actually the unstable cliffs between Parsons Tunnel and Teignmouth. The prospect of a major collapse of the cliff onto a passing train doesn’t bear thinking about.

Now, for the first time, Network Rail is in a position to reveal its detailed plans, ahead of a public consultation which resumes on January 20. It has investigated the cliffs in immense detail, and analysed 2014’s collapse to come up with what it is confident is the best (or for those opposed to the plans, the least worst) solution to secure the railway’s future.

Back in 2014, the cliffs suffered a compound wedge failure where a big wedge of material slid down towards ground level. Unfortunately, ground level also happens to be track level.

The solution to secure the cliffs is to install buttresses at its toe, with dowels of hollow steel tube up to 30 metres grouted into the cliff face. This should secure the cliffs from future major collapse, but it’s only part of the solution. This is because there simply isn’t enough room to strengthen the cliffs and keep the railway running.

For local residents, the most contentious part of NR’s plans is the rerouting of the railway away from the vulnerable cliff bottom and onto part of Holcombe Beach, via a deviation. There has been a lot of rumour about the near-total loss of amenity of the beach - it is popular with walkers and tourists, and opposition to the much-discussed deviation has been strong.

In part, this has been because designs have been evolving from initial concept to a point where NR can now provide clear plans of what it intends to do.

The plan is to build a 1.18-mile deviation from the western portal of Parsons Tunnel to Teignmouth cutting, the outside quarters of which will be sea wall and the middle half a revetment.

The aim has been to only move the railway from the most hazardous parts of the cliffs, while retaining as much as possible of the existing alignment. From figures widely quoted saying that up to the equivalent of 22 football pitches will be lost from the beach, NR says the current total is that 53,829m2 of land (including the current Sprey Point) will be reclaimed. If you want another visualisation, that’s in the order of 7.4 football pitches - a third of what campaigners fear.

The sea wall sections will be near vertical but will include a wave recurve at the top (as at Dawlish), in order to minimise the impact on beaches. Along with the revetment at Sprey Point, there will be a smaller one at Parsons Tunnel to replace the current one.

On the portal at Parsons Tunnel itself, a rock fall shelter will be built to protect the railway from rockslides from above the tunnel. It will be open on the seaward side, so the famous views from the trains will be retained.

The cost of all of this? No final cost has been decided, but while the resilience works west of Dawlish station are expected to come in at below £30m for a section of 360 metres in length, the deviation and cliff strengthening works are expected to cost in the hundreds of millions of pounds.

An Environmental Impact Assessment is expected to be submitted later this year. Then, subject to approval, a Transport and Works Act Order application will be made to the Department for Transport. This is expected to take around 18 months to complete, and given the nature of the project could involve a public inquiry.

Assuming the EIA is cleared in the autumn, the TWAO passed and funding provided, tendering for the work could begin in 2022 and take up to a year.

But that is just the beginning. This is a huge project. It is expected to take three years to build the new alignment and shift the railway on to it - with a further five years needed to stabilise the cliffs. It is difficult to think of any post-privatisation projects of this length of route which have taken so long.

With a favourable wind, it will be towards the end of the decade before the resilience works on this section of track are finally complete.

But what of other sections?

At Dawlish station itself, the eastern section to Coastguard Ramp is being split into six parts for analysis and development of options. From the Colonnade to the station, NR is examining either a sea wall or offshore structures, and from the platform area to Coastguard Ramp a sea wall.

Neither are entirely perfect options. Modelling and tests prove a high-level sea wall will be (as one might expect) more resilient to waves, but it presents an access problem to the beach that can only be resolved with lengthy ramps.

However, there are also opportunities in this challenging location, which has to consider the protection of the Grade 2-listed station building. For example, a new footbridge with lifts and stairs is being discussed for Dawlish station, replacing the current barrow crossing at the western end. This will undoubtedly make a huge difference to passengers with mobility issues and pushchairs - and thousands of holidaymakers with heavy luggage.

A planning application is due to be submitted this year. If approved, NR plans to go on site outside the main summer tourist season. Up to £50m has been allocated by government for this, although the final cost is still being assessed.

The remaining section around Dawlish and Teignmouth is the Central Tunnels section between the northern portal of Parsons Tunnel and Dawlish.

Designs are still being developed for this section, but a rockfall shelter at Parsons Tunnel north is under consideration (it could be up to 209 metres long).

Beyond there, all of the techniques to strengthen the cliffs already being designed are under consideration. Later this year, we should have an idea of the completed designs.

Despite what its critics say, Network Rail has engaged with and listened to stakeholders - ranging from local authorities, statutory bodies and residents - in order to minimise the impact (as much as possible) of this important scheme. There is an information kiosk at Dawlish station, and consultation events have taken place across Devon and Cornwall.

Despite the loss of some of the beach, there will be some ‘wins’ for its users, too. Early on in the consultation, respondents were asked about the suitability of widening the current footpath on the sea wall to incorporate a cycle lane, or of building one on the landward side by the cliffs. The response was that it could be dangerous for walkers, so a cycle path could now be built at the top of the cliffs to link Dawlish with Teignmouth.

Exactly what facilities will be at the bottom of the cliffs where the railway currently runs has not been finalised, but it seems reasonable to assume that there will be some amenity benefit to mitigate the plans for the railway.

People in the South West remember well the disruption caused by the loss of the railway for two months in 2014, following that combination of cliff collapse and wave overtopping. Many businesses took a long time to recover.

Nobody at Network Rail is pretending that building a new deviation at Teignmouth is an option that will please everybody, but it genuinely has attempted to limit the loss of beach at Holcombe and consider those concerns.

The challenges of the work planned cannot be underestimated. There have been unexpected technical issues with Phase 1 of the work at Dawlish, but Lovell tells RAIL: “We’ve taken the time to get the design right . We’ve learnt a lot from the initial phase, and we will build that into future designs. Moving forward, we’ll be in a better position.”

Given that the wider programme reaches out for around 50 years towards Exeter, this incremental approach clearly makes a huge amount of sense.

After five years of criticism (largely directed towards government) for inaction on strengthening the far South West’s only main line, things are finally starting to happen on the ground.

Network Rail is confident it can do the work needed, so it’s now over to the phalanx of Conservative MPs who dominate Devon and Cornwall to push the case for funding to be provided. For many in the South West, that funding cannot come soon enough.