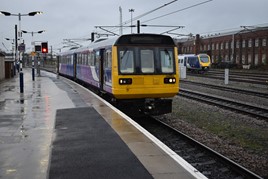 With less than a year to go until accessibility regulations come into force, the rail industry stands at the top of a cliff with one foot hanging over the edge. The situation is best summed up by the Office of Rail and Road warning the industry that it needs to work together, to ensure new trains are compatible with the operational systems as well as infrastructure. That’s basic stuff!

In recent issues, RAIL has highlighted the problems facing the Gospel Oak-Barking route, where new trains are a year late (and counting) with no introduction date confirmed, forcing London Overground to halve the frequency of this busy route because the trains it was using have been moved
elsewhere to meet franchise commitments.

​The law states that by January 1 2020 those trains must meet accessibility regulations, otherwise they can no longer be used. The plan had been for the Midland Main Line to be electrified and for new electric trains to replace the HSTs, which date from the early 1980s on this route. As a consequence, rolling stock leasing company Porterbrook, which owns the HSTs, decided that investment was not worthwhile, and so planned to remove them from traffic by the end of this decade once the new fleets were in place.

However, Secretary of State for Transport Chris Grayling then announced in July 2017 that wires would not be erected north of Kettering and Corby, at the same time claiming that new bi-mode trains would be introduced from April 2022. No mention was made of the HSTs.

In theory, this left a shortfall in rolling stock on the Midland Main Line between December 2019 and April 2022, with insufficient trains available to cover the services.

By that time, Porterbrook had lost the opportunity to slot the vehicles into a conversion programme at Wabtec at Doncaster, to meet the deadline, because three other operators all had deals in place for their own HSTs (which are now also running late).

Last year, Porterbrook told RAIL that to modify the HSTs ready for this year’s deadline would cost £50 million. This would need DfT approval. Note that the same company spent £40m fitting new traction packages to South West Trains Class 455s, and further millions extending four-car ‘458s’ to five-car trains as part of a Government-ordered plan only for them to be redundant when Government confirmed an order for brand new trains in 2017.

Yet Government continually insists that it is up to rolling stock companies to sort out their own fleets. It’s all very well saying that, but with the dead hand of the Department looming over every decision (even, I am told, as to whether an open access operator can lease a train from a TOC that shares the same owning group), what chance does the industry have? Especially if decisions are changed later.

This comes back - once again - to the debate about the structure of the rail industry and just who exactly is responsible for making even the most basic decisions.

A senior politician recently told me they had raised the subject of the accessibility deadlines with the ministerial party, and was told that “everything would be fine”. Is this a case of burying heads in the sand and hoping all will be well? Is it ignorance and complacency on behalf of the Government? Or if there is a plan, just what is it?

These accessibility deadlines should have been dealt with much earlier. RAIL 681 (published October 2011) featured an interview with Porterbrook, where the company explained its plans to refurbish ‘156s’ for Greater Anglia to meet the deadline. These were the first to be treated. There was a plan. And ever since then, there has been a clear message that fleets which do not meet the deadlines cannot be used.

Until now…! This issue we report that the DfT has asked EMT to tender for work on its HSTs, which would enable them to remain in use until new trains are delivered. Lord Bradshaw raised this issue in the Lords on March 19, when government transport spokesman Baroness Sugg simply responded: “The Department is currently evaluating East Midlands franchise competition bids. The successful bidder is required to undertake procurement of new bi-mode trains to meet the requirements of the Invitation to Tender.”

This HST work would include fitting retention tanks and various accessibility features, but not automatic doors. In a letter sent by EMT Managing Director Jake Kelly to Nottingham South MP Lilian Greenwood, Kelly mentions that the doors are not part of the compliance regulations.

Yet operators believed that they were. One train operator that uses Pacers mentioned that was one of the key reasons why these unpopular trains must be removed from service by the end of the year. Confusion reigns.

The political fallout of using Pacers into next year in the North would be huge. These trains, which have actually served the railway well, date from the mid-1980s (as do some of their interiors), and are not popular with passengers who have had to suffer through delayed electrification schemes and the May 2018 timetable chaos. These same passengers are constantly told that new trains are on the way, while the industry in general states that some £48 billion will be spent on the biggest upgrade since the Victorian times.

Yet how will those passengers feel when their train arrives on January 2 2020, just as fares rise, if it’s still a Pacer? Or a derogated HST?  (As much as lovers of the railway may like HSTs, the ‘Classic’ sets introduced in Scotland were not received with universal acclaim.)
Or even worse, their train has been cancelled? And what about those on the Gospel Oak-Barking route, who have endured a delayed electrification scheme with the promise of new trains being delivered, only to end up on a bus - with no end in sight?

Is it any wonder, therefore, that Keith Williams believes the industry has lost the faith of the public? Is it any wonder that calls for the railway to be nationalised grow, when we constantly fail to deliver new fleets and infrastructure on time? How long, indeed, until the promises of investment sound hollow?

Introducing new fleets and replacing vehicles dating from 1976 should be a cause for celebration. Instead, as one managing director told me: “It’s embarrassing to say I work in rail at the moment.”

This has to change. The industry wants to change, but it must be allowed to. Government must let go. If we cannot introduce new trains on time, what hope is there? That is why the Williams Review must succeed.