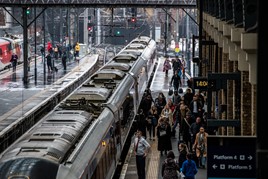 It was good to attend the annual ‘Bradshaw Address’ on February 26, and tune into a sense of Keith Williams’ thinking as he makes progress with his fundamental - and fundamentally important - Rail Review for Secretary of State for Transport Chris Grayling.

There was not even standing room-only in the lecture theatre at the Institution of Civil Engineers’ impressive headquarters in Westminster, just a stone’s throw from Parliament. Around 330 tickets had been issued for 300 seats, with overspill guests watching remotely by screen a few rooms away. The audience was a ‘who’s who’ of Britain’s Railway - there is understandably intense interest in what Williams will recommend for an industry which everyone agrees (rare in itself!) must change radically, quickly and effectively.

As Williams put it himself in his opening remarks, there is “a shared belief that we are at a crucial juncture where public trust crosses the industry’s ability to deal with change”. He continued: “I believe that for the railway to be successful it needs to put passengers at its heart…”

So far, so good. There’s nothing there that I (or anyone in the room) could disagree with - and indeed that applied to his entire speech. And yet many in the audience were left with a worrying sense of unease that an irritatingly superficial, poorly staged post-speech ‘Q&A’ failed miserably to even address, let alone attempt to engage with.

Let me think out loud to explain my concerns. Williams’ assessment of the industry’s problems was lucid, on-point and articulate (read for yourself at https://www.gov.uk/government/speeches/the-bradshaw-address-by-keith-williams). There was much to applaud, nothing substantive to disagree with, and it is clear that this review (the 31st since 2006) is chaired by a capable, independently minded and experienced transport professional. His agreement and acknowledgement that root and branch reform is unavoidable were very welcome. Sighs of relief all round. Hooray.

But it was Williams’ framing of those shared concerns that bothered me. I couldn’t escape a nagging feeling that there was an underlying ‘there’s nothing new here, these are long-understood and acknowledged problems - why hasn’t the industry sorted them out yet’.

Industry, industry, industry… the word came again and again and then again in a litany of accepted failings which now absolutely must be addressed. I summed up my unease when I managed to put a question in the wastefully shallow Q&A:

“None of the radical reforms and changes you correctly identify - not one of them - can be agreed, let alone implemented, unless Government unlocks the levels of power and allows them to move in the required direction. Are you optimistic Government will allow these things to happen and make the changes you outline possible?”

Thankfully, and without hesitation, Williams good-naturedly agreed with the premise of my question and confirmed his optimism that Government and DfT would indeed do the right thing - as indicated by my question. Readers of my last Comment will know that I do believe that Government and civil servants are indeed ready to cede power to a new arms-length organisation to lead railway strategy and delivery as established by policy makers.

So why didn’t Williams say so - openly and overtly? His speech is littered with the word ‘industry’ - read it yourself and see if you agree with my sense that on just about every occasion it should read ‘industry and government’. Try it for starters in my quote from his opening remarks in the third paragraph. Then try these other examples for size:

“Despite everything that is being done and all the money that is being spent over time, the rail industry has lost sight of its customers - passengers and freight - and therefore lost public trust.”

“…nothing has convinced me yet that today we have either a common vision or the capability across the industry to make the railway truly customer-centric.”

“…my role is to realign the different parts of this fragmented industry so they face the same way with shared incentives, with risks and rewards
sitting in the right places.”

“Over the coming months we will continue our extensive engagement with the railway industry, with passengers, and with business.”

“There’s real hunger for change within the industry as well as outside.”

I would have been much more convinced if the words ‘and Government’ had appeared after ‘industry’ in all seven of those selected examples. See my point?

None of the seven developments listed in just those few quotes can happen without Government and civil servants ceding power - and that is something neither normally do easily. Maybe Williams assumes my concerns are answered implicitly, but this won’t do - he needs to be overt and explicit.

Giving him the benefit of the doubt, there are hints he ‘gets it’ towards the end of his speech, in these comments in particular:

“There is a general frustration… that rules and regulations are holding back innovation and
problem solving.”

“…we need to consider all potential answers… from new models of franchising to greater public control of contracts.”

“…bluntly, franchising cannot continue in the way it is today. It is no longer delivering clear
benefits for either taxpayers or farepayers.”

Put even more bluntly, the DfT’s greed in prioritising big premium payments over service to passengers has driven margins below the rock bottom 3% judged to be a minimum that the private sector can work with. As a direct consequence, National Express (once an operator of nine franchises!) has walked away from the industry, and First and Stagecoach could follow suit if things don’t change - you cannot have competitions with no bidders.

And I’d ask those advocating nationalisation of the TOCs as the solution to confirm their belief that Government could run them for less than the 2%-3% the private sector is doing it for? I think it’s delusional to believe this: so if it happens, prepare for yet bigger fare hikes, tax increases - or big investment cuts.

Perhaps Williams is treading carefully and being diplomatic so as not to scare the horses at the DfT and in Government. Perhaps he is ‘keeping his powder dry’ so that his final report has the explosive resonance we need to see when it’s published. As he indicated himself in answer to my question at the Bradshaw address: we don’t want - and cannot afford - another damp squib.