Shooting the breeze with Virgin’s Sheila 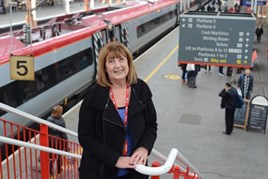 Some would make the Airport train safely. “You saw that train go, and then… someone tapped me on the ankle. They had been crawling across the track! He had got off the wrong side!”

She roars with laughter at this memory. “It’s fantastic now compared to then.”

Breeze never told her mother about this first night, but did she ever question what she had done with the career change in those early days?

“I never did. It’s strange, I guess. I loved it. Three weeks into the job I ‘got it’ about the railways. I got that it is a big family.”

Her ambitions kicked in after three weeks. “It took me that long to realise I wanted to be station manager. You get the opportunity with Virgin. There are always people who love the job and are happy to stay doing what they do, but if you show interest then you are given the opportunity to progress.”

Her career meant her leaving Crewe after two years and moving to Stafford. Then an opportunity arose for station managers across the VT network. She applied, and was given Wolverhampton. “It was amazing training. You learn things like safety and procurement. It was all there. I liked it. I could choose what I needed. It was intense.”

Her next move was to manage both Warrington Bank Quay and Wigan North Western.

“It’s a challenge managing two stations, but they are close together. It was easy - I had an office at both. It’s ten minutes on the train, and it is about sharing the work out between the two.”

She then became manager at Stafford, and then both Stafford and Stoke.

“I then applied for here . I was very torn at the time, as I had built up a very good relationship at the stations. But I always felt I was coming home here to Crewe.

“I was shortlisted. The phone call was amazing. It was early evening and was on the work phone. I saw who it was and it was to say congratulations. I was emotional.”

So what has changed since she first started?

“The trains are different. And I’m now managing some people who trained me! It wasn’t tricky because when I was with other stations I always travelled through here. There is banter anyway. They joke: ‘I taught her all she knows’.

“No two days are ever the same either. You never know what’s coming. You have meetings, of course, but there are still things that happen. I am on call and the phone could go at any time.”

One example was Grayrigg in 2007 (see panel). Another was in February 2014 when Crewe station caught fire.

“The fire was horrible. We had a lot of wind. It was a Wednesday and I trended on Twitter… that was a first!” She laughs at the latter, saying it made her son very proud.

“I thought that the weather was a bit rough and I called the Team Leader, Mark, to ask what he was thinking. He said: ‘It’s picking up.’

“We walked around the station and had a look at Platform 12. I have never been hit by something like that. The wind was so strong. We walked the station and heard lots of rattling. My concern was the roof, as it is quite exposed.

“Mark then got a call on the radio that a bit of roof was down on Platform 10. This piece of roof had just smashed! There was a hole, and we cordoned it off. Then a bit of Platform 11 went.

“It started at about 1600. That was when we started to feel it wasn’t so good. We sent Network Rail some messages that we were concerned. Remember also that there were still trains running and people were trying to get home. Mark said we could evacuate. That was the best decision and he called it.

“As we did that, the roof was going everywhere. I was worried someone would get hurt. A piece flew off from Platform 7 and hit the overhead line equipment. There was a bang. It was really loud and that made me jump. There was smoke and flames.

“The OLE was then switched off. It was peak time and there was a Pendolino in the station. We had to get them off the train as the OLE was off. It couldn’t go anywhere. We took the passengers to the Crewe Arms. They were great.

“The day went into a blur. About 2230/2300 Network Rail gave us the all-clear. Those that stayed, myself included, had to wear hard hats. I did the final check, and a piece of roof flew from Platform 6 and landed on the OLE over the Pendolino. Then it flew back to the platform. The policeman I was with jumped, and I followed. He’s supposed to protect me!” She laughs at that memory.

“When we came upstairs the glass lights were blowing out. I don’t think the weather actually lasted long, but there was a suddenness about it. The passengers were brilliant. They knew what was going on.”

As retirement looms, what does Breeze think when she looks back?

There are 51 staff at Crewe, and she says: “I will miss them massively. I’ve had the time of my life. We dress up for Easter and Christmas. I have been to parties at Richard Branson’s house, and to award ceremonies. You have bad days, but the majority of them are good.”
What’s she going to do after January 17, when she retires?

“I’m thinking of writing a book. It’s in my blood now. I am always talking to people and they want to know what it’s like. It’s like the first time I saw a steam train. I’m from the country - we don’t get them there. I was like: ‘wow’.

“Retiring is the right thing. My husband has retired. I want to travel. I want to see other rail networks. Besides, I doubt I’m going to be saying goodbye. You just can’t leave the railway.”