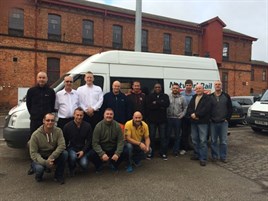 Safety has been a Network Rail watchword for many years. As part of the organisation’s very DNA, the concept of safe working differentiates it from its predecessors, who presided over a time when railway accidents were all too common.

Arguably NR’s biggest responsibility is to the travelling public and other users of the network, ensuring that the thousands of passenger and freight train journeys that take place every day do so without incident.

But before any of that can be considered, NR’s own workers and contractors have to be sure that the work they are doing to maintain and renew the rail network is carried out safely.

NR identified that it needed to improve its safe working regime - to make it clearer and easier to understand. And with a commitment to improving safety in the current Control Period, that work has resulted in the introduction of a new system.

“Bench-marked against the odds of a postman being bitten by a dog, we do OK,” he tells RAIL, although there is clearly still room for improvement.

Permit to work systems remain, but are brought up to date. However, the most visible sign of the new regime is a new duty on site - that of the Safe Work Leader (SWL), who leads on both the task at hand and operational safety. This is the person in overall charge who takes leadership for people’s safety.

So in future, the bread and butter of NR’s maintenance programme - a straightforward renewal of a stretch of track, for example - will be clearly and identifiably led by this individual. And according to Frobisher, he or she will be obvious: “The SWL gains a jockey’s hat - visible to all on site.”

With various contractors on some sites, all with their own safe working inductions, sometimes it’s not always clear whose safety procedures workers are following (and therefore, who is accountable).

Under the new regime, there should be no doubt. “There’s no ambiguity about who is in charge,” says Frobisher. “The one thing you can’t delegate is your people’s safety.”

In practice, this means that at large, complex sites such as London Bridge (where there could be as many as 600 people and multiple contractors), there will be just one Safe Work Leader “making sure things are organised and making sure one group doesn’t harm the safety of another”.

Training has already started, with 400 Safe Work Leaders signed up nationally and five attending the course each day.

The training is pitched at different levels, depending on the complexity of the site - everything from possessions where the movement of trains is directed, to two members of staff going to inspect a fence.

“Everybody needs to go on a training course and practice the skills in order for it to be current,” says Frobisher. “We are training people for what they need to do appropriate for the activity.”

The SWL is also involved in the planning of the job, yielding a good understanding of what is involved. The SWL’s line manager inspects the plans, and then if he or she is satisfied, approves it so that a permit gets issued. This brings rigour to the planning approval process.

A new piece of software (as used on oil rigs and at refineries) has also been introduced for the new regime, enabling work to now be planned through one system for all work sites.

Says Frobisher: “It delivers tremendous business benefits. When there’s a potential clash, everybody gets early visibility of what each other is planning to do.

“And when something fails, we can find out who is working where. There is the ability to fix problems quicker, such as a points failure. It could also be easier to deal with problems knowing who has the skills to assist.”

Frobisher says that even from the NR helicopter, someone with an iPad can work out who is not supposed to be on site.

Along with their permits, which describe what they’re doing and the risk controls, SWLs are also issued with brand new maps of the rail network - 1,200 closely detailed A4 sheets have been created as part of the electronic permit to work system.

These maps contain all the essential information for an effective site safety brief (line speeds, direction of traffic, signal numbers and hazards, for example), so that workers know exactly what’s around them and where potential dangers lie.

“Everybody understands it because they are all using the same format. For the first time, NR is providing people with extra information, allowing people to orientate themselves. It’s much more straightforward.”

The oil industry parallels are a coincidence (this project started before former BP man Mark Carne joined NR as chief executive), but unsurprisingly the man at the top of the organisation is supportive.

“We are absolutely committed to improving safety performance in the railways,” says Carne.

“The Safety Vision explains to staff and contractors the expectations that we have of them regarding safety and safety behaviours. It demonstrates our leadership commitment to building a safer railway, and underpins everything we do as we strive to get everyone home safe every day.”

What is the end result? Frobisher points to the fatality weighted index (FWI) of workforce injuries as published by the Office of Rail Regulation - a measure ‘weighting’ minor and major injuries and fatalities. Minor accidents carry a small weighting, and more serious accidents carry a larger weighting.

“We are projecting that this change will result in a 14% reduction in accidents across the board,” says Frobisher.

The East Midlands will be the first area in which the system goes live (by next month), with the London North Eastern route the first to be dealt with between Derby and Lincolnshire. Progressively, the whole country will be brought into line geographically, area by area.

Frobisher says that the rollout is being done on a manageable scale: “There is a committed team. And it will make such a difference. The scale of the challenge affects us all.”