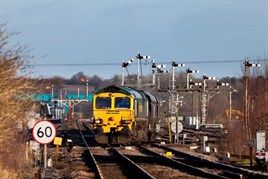 It’s been a challenging period for Freightliner Heavy Haul, but one from which it has emerged stronger for the experience. The company’s turnover is around £140 million per year, and this will likely grow in the future, thanks to a host of new opportunities.

Indeed, rail freight has a wealth of ambition… and the major freight operators all seem optimistic regarding the future of the sector, with an increase in the number of new flows.

FLHH Commercial Director David Israel is certainly of the belief that the future is bright. He admits that times have been tough, but that now the future is much rosier.

“We were hit by the recession, but we managed it, and very successfully. We managed the workforce - we are proud to say that we came through it with no redundancies.”

There was natural wastage, as recruitment slowed and staff retired or moved elsewhere. “There was pain, of course, but all of a sudden we came out of it.”

Israel describes the performance of rail as “a barometer for UK plc. One customer had a big upturn, and that came through overnight.”

“That was two years ago,” says Israel. “We accepted that, and then the coal sector picked up again. Then aggregates, steel, cement… everything picked up. I have been in the transport business all my working life, 30 years, and I have never seen that before - all happening at the same time.”

Moving out of a state of recession so quickly presented its own challenges. FLHH had to service its existing contracts, while also sourcing enough locomotives, wagons and staff to facilitate the new growth in the market. Some work had to be turned away, although Israel acknowledges that these are factors that must be tackled if the sector is to grow.

He also believes that freight doesn’t get enough access: “Definitely not. We only pay a marginal cost, is the argument, but look at what freight has done for the UK. People forget that.”

Certainly rail freight is set to become a vital cog in UK plc’s plans over the next few years. There are commitments to build and widen roads, as well as construct thousands of houses, and rail is seen as a greener and more reliable way of transporting materials.

The leading freight operators all see aggregates as a key market, and have eyes on the planned developments around the UK. Israel is no different: “We have to serve the road building and housing markets. Then there is HS2… Crossrail 2… there has to be Government funding.”

What does he mean by that?

“Help with terminals. We are looking for new sites, and not just in London. They are hard to find. There are some left, but there are some that are too small.

“It varies in what you need. Sometimes it is a siding and a pad, to something far more complex. Sometimes you need bagging facilities, platforms and silos. Maybe even warehouses. It all depends on what the customer wants.”

He returns to the subject of access, and the concerns over getting better paths on the main line. But the railways are close to capacity - for example, the West Coast Main Line south of Rugby is the busiest section of main line railway in Europe, while there are reportedly access issues on the Midland Main Line. Both could be strategically important routes for rail freight to reach London and its booming construction sector.

Rather than running more trains, it seems that running longer trains is the answer, which makes sense - after all, if there is no space left on the national network, applications for more trains are hardly likely to be approved.

“The Hope Valley, Bristol and Doncaster are the issues,” he says. “But it is everywhere. The MML is horrendous.”

Not all of FLHH’s core businesses are necessarily affected by the problems of access, with Israel acknowledging: “The coal sector is not an issue, although a quicker turnaround would be good.”

The alternatives do not offer a good future for rail freight, he says. If there is no support from Government, then quite simply the sector could face major problems. “They will look for alternatives. It will go by road.”

The knock-on effects for customer supply chains are a concern for Israel. Pathing is therefore something that FLHH is taking seriously. Israel says the company has a specific team looking at pathing work and engaging with Network Rail to try and improve matters. For its part, Israel says, NR is supporting the operator, but he admits that that is being done “slowly”.