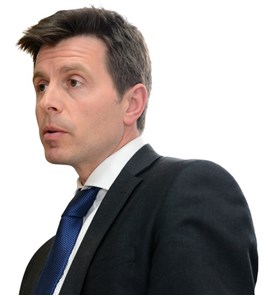 Infrastructure improvements also bring challenges. Austin confirms the likelihood that the wires will be up on the Gospel Oak-Barking Line before the new trains are here.

“There are funds available for it. But is it fully funded? That’s a slightly different question.”

What about a long-term plan for the Bakerloo and the Watford DC lines. How do they interplay with each other?

“The aspiration on the DC is to go for four trains per hour - currently it’s a train every 20 minutes. It’s not a true metro. It is the one area of the Overground, while you have very good quality stations and good quality trains, where you haven’t seen the same phenomenal growth you have on the rest of the network. And that’s down to the frequency of the trains.

“The aspiration is to keep going into Euston despite HS2 and any disruption there, and to increase the frequency to four trains per hour.”

The increase in Overground traffic has been concentrated on the East London and North London lines. Surely if traffic does keep on growing, there’s only so much you can do to increase capacity? Rotherhithe and Canada Water, stations that are in tunnels, already have selective door opening as the platforms aren’t long enough for the whole length of the train. Six-car operation would be impossible.

Says Austin: “Everyone concedes that five cars is as long as we can go on the existing routes. The additional growth is going to have to be accommodated through more frequent services - again that’s looking at additional paths on the North London Line.

“How do we do that? More signalling and infrastructure works? The easiest way to do it is to get freight off the North London Line and Gospel Oak-Barking Line. Network Rail has long-term ambitions to try and get freight out of London.

“The other constraint on the East London Line is the amount of trains you can get through the core and signalling system. Currently we run 16 trains per hour through the core, which includes the Thames Tunnel. It is a very intensely used piece of railway. If you want to get more capacity than you have at the moment, you are probably looking at introducing some sort of Automatic Train Operation technology.”

But only so much can be done with signalling and extra trains. Beyond that, it’s Crossrail 2 and other rail schemes that will provide the capacity that London needs.

Austin picks up a hefty document that outlined what LOROL would do - the bid assumptions.

“To go from what we’ve promised to what we’ve delivered - for me it’s been really rewarding to see. From front line to the management team here, everybody has really bought into the vision. It’s been a really fantastic place for everyone to work. Every one wants to get on and have opportunities. To see traffic grow, to see the number of passengers grow, has been a real privilege.”

It’s a model that TfL feels has worked, The same concept will be used for Crossrail, with the partially common ownership in that MTR will run that concession.

Says Austin: “Both Arriva and MTR are fully supportive shareholders. In the early days, the owning groups didn’t have a huge amount of interest in other interests. We were set up to stand on our own two feet. As European interests have got bigger, we have found ourselves part of bigger groups, of bigger families.”

Looking outside London, there is a lot of talk of regional devolution, and more locally accountable control of railway networks. Could the London Overground model work elsewhere, with accountability through a democratically elected Mayor?

From a commercial point of view, would the model work elsewhere?

“It’s debatable how well it’s worked in Tyne and Wear . But it’s slightly different circumstances there, and light rail as well. But it comes down to having a client who is close to the contract and knows what they want, and who has the right degree of technical ability.”

Could a non-devolved organisation manage a contract as well as TfL?

“Yes, they could with the right resource in place. There’s no doubt that TfL wanted the Overground to be a success, and for it to be a success the operator had to be successful as well. A partnership approach makes it work.

“You can run into difficulties in any contract. But we have a sensible relationship with TfL - if what we think is specified is sub-optimal, or we can’t quite deliver it but can deliver something else, then we’ll have a grown-up conversation about it. Normally, we’ve been able to find a sensible way through that.”

Unsurprisingly, Austin believes that TfL is “a pretty good client”, explaining: “They’re very demanding. They know exactly what they want. Devolution gives them the ability to deliver that. We’re managed exceptionally hard by TfL on overall performance, on the Public Performance Measure. That’s a behavioural aspect of TfL and their management style.

“But we have a closer day-to-day relationship. TfL staff are physically present in the building. It doesn’t make us behave any differently in here. If they want to see us, they’ll pop up. It works well, having that proximity.”

With just under 18 months to run on the nine-year concession, a lot has happened - and London Overground is quite rightly held up as an example of how to rejuvenate and develop a formerly neglected urban railway.

Austin concludes: “I am very excited about the next concession. Overground is well placed to keep growing.”