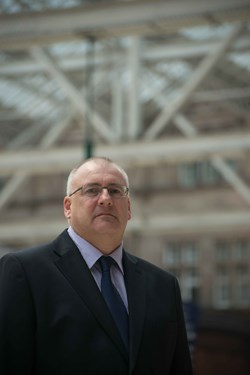 “GB was prepared to innovate in terms of traction, which is good because the ‘92’ gives us more than the ‘90’, and I think that the whole ‘73/9’ thing is hugely innovative. I’m genuinely excited, because on the face of it, you go ‘oh my goodness, what are they doing?’”

Even Strachan seems slightly taken aback by the thought of these rebuilt 50-year-old Southern Region electro-diesels working in the Highlands: “You’ve got kind of suspended belief, haven’t you?”

However, there have been teething problems, and so ‘67s’ will remain until the autumn. Class 47s had been proposed by GBRf, but a deal has been struck meaning that Class 67s will remain.

Adds Strachan: “The other thing, to ‘big John up’, is his whole team have been really passionate about driving confidence for the Sleeper. It’s a different technique driving a Sleeper. It’s a bit of a dying art, and GBRf was really very keen.”

The principal element is the new carriages. They’ve not officially been given a classification yet, but perhaps they could be labelled Mk 5s?

“I’m glad you’ve called them that,” says Strachan. “Because I said that to somebody the other day, and they said ‘yeah, I suppose you’re right’.”

The new carriages will be built by CAF in Spain, with the first entering traffic in 2018. These are the first locomotive-hauled carriages to be built for the UK market since the Mk 4s were introduced onto the East Coast Main Line in 1989-1992. But the ‘Mk 5s’ will be much different.

Strachan explains: “It would have been a huge temptation to say ‘let’s build a luxury train’. What we have contracted to do is this: the vehicles have a proper reclining seat. So something better than premium economy on British Airways and Qantas - a bit of a reclining pitch, and a hugely more comfortable seat than we have currently in the Mk 2s.

“The thing that really excites me is that the pod will be akin to a business class airline. One of the things that we agreed with CAF is to test the wider transport market. To my reckoning, there’s currently only one of these in the world, and that’s in Queensland. So we’ve been really clear and keen with CAF to say ‘let’s test these’. We’ve agreed with CAF in the design process that we’re going to test what the market can give us.”

Strachan recognises that the length of the journey from the Highlands means that the train is effectively the same as a long-haul flight. “It’s like going to Johannesburg or Vancouver.”

That means the Mk 5s must be different: “Something that says this is a railway, but different. It’s not a railway per se. And I think the pod will be hugely attractive and very flexible.

“We’ll then have a standard berth, which is keeping with the configuration of either being a twin or a solo. And we will have a flexibility to do that, so it gets rid of the idea that you’ll still be sharing with a stranger in 2018. If you want to bring somebody to share with and you’re both happy about it, that’s fine. But we’re not going to force you.

“And a couple of types are in the design programme of premium berth: en-suite, which I think again is a hugely attractive proposition; and en-suite with a shower. We will also have in that vehicle (and possibly another vehicle) some other showers.”

He says decisions regarding who can use the showers have yet to be made. “But we will have showers that are in the general area - not just allied with a bed.”

With all this equipment on the Mk 5s, surely they will be heavy?

Currently the Mk 5s are at the design phase, with Interfleet appointed as the project integrator.

“CAF has started the design process. We’ve had kick-start meetings both in the UK and in Spain, and Ian Smith has been introduced to the CAF team to start thinking about the interior design of the trains. So we’re off and going.”

It will necessitate a quick turnaround, but Strachan doesn’t seem fazed: “I’m not unhappy about the design and the construction programme. The signing on February 6, trains in service from April 2018. I think that’s long enough - not too long to be silly, but long enough for us to actually get it done.”

He says that the first vehicles will arrive in the UK in the first quarter of 2017, and that ideally they will be commissioned at Old Dalby.

“We’d like to get in there, because it is ours! I’m not sure if we can book our own slot there. You have to make sure that we’re treated properly as a customer - as a supplier and vice versa.

“So that’s one of the details that the team has to carry out… what is the commission plan? We’re going to use the main commissioning because, as part of the new train’s deal, we signed Alstom up to be the maintenance team. I think that’s really good - I really like the continuity between Mk 2s and Mk 3s and the Mk 5s, from an Alstom point of view.”

For trains running north of the border, the weather remains a factor that must always be taken into consideration.

Says Strachan: “I think from a train performance point of view, it is a contingency arrangement for Scotland during the winter. Because it strikes me that it is not plausible from a messaging and a guest point to say that ‘it’s cancelled tonight because of bad weather and we’re going to put you on a bus to see you across to Perth’. That doesn’t quite add up in my view.

“There would be no such thing in the North as the all-weather railway. But I would like to think that between ourselves, the Network Rail team and the Abellio team, we would do everything to keep the thing moving. Because if the Sleeper can’t get through, that should be the benchmark.”

Earlier this year the Rail Delivery Group published a report that discussed how the railway responds to poor weather, including proving runs to ensure the line is clear.

“The first Down train in Aberdeen is slightly different, but certainly in the Highland and Fort William we are the first train,” says Strachan.

“I started having a dialogue with Network Rail colleagues, but it’s just how to make sure we run the Sleeper at every possible opportunity. People rely on it. It’s really telling. We saw that in some of the numbers we had coming through on a Friday night when Glasgow Airport was completely snowbound back in the middle of January. We saw quite a lot of walk-up business on the Glasgow Sleeper line, because of people being kicked off various FlyBe’s and things.”

In the event of line closures, the Mk 5s will also be gauge cleared for the Settle-Carlisle Line, for the Glasgow & South Western via Dumfries, and for the East Coast Main Line.

“If you can run the train, you want to run it. Talking to people, it was this feeling that it would be so much better if you get the train, to keep it open. You don’t want to be disrupted.”

Abellio takes over the ScotRail franchise in April. What’s the relationship like with Serco’s Caledonian Sleeper?

“Because of our relationship on both Merseyrail and Northern - strong working relationships - we kind of need each other. They will be supplying the train managers for the Highland sections, which I think is a smart thing to do because that’s where the knowledge is. They’re supplying level 5 at Inverness, so keeping it at Level 5, and obviously the station access of all the principal places around Aberdeen.”

Another thing that Serco will introduce is passenger help. Totems will be introduced.

Strachan was based in Australia before he took on this role. Why make the move back?

“Why not? I’m a Scot. It’s genuinely exciting. I can’t think in my career (35 years this year) that I’ve had the opportunity to transform something that’s been a bit stagnant, a bit tired around the edges, with an absolutely brand new fleet and a proposition that takes it to a completely new era.

“I know it’s warm and sunny in Sydney, my wife says when she sees the snow from the car at Aviemore, but if you get offered that sort of thing then what’ll we do?