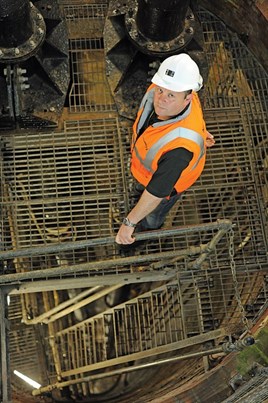 “I became fascinated with the Severn Tunnel when I was a kid in school. I would look out of the window and see men in white suits dragging pipes but I didn’t really know what was going on.

The headmaster got a little annoyed at me once for staring and told me I “wouldn’t get very far”. I guess he was right - I ended up over the road!

I am the fourth generation of my family to have worked in the Severn Tunnel, so you could say it was a natural move for me to join the team.

My great grandfather, Alfred, was the first in 1887 and I suppose it has become a bit of a family tradition. My grandfather, Stanley, my dad, Rowland, and even my Auntie Margaret have worked down here.

The job was pretty much the same for everyone else, but since everything has become computerised, a lot of work has been replaced by a click a button. I have seen the tunnel revolutionised over the years and, apart from that “end of the world” millennium bug scare, it’s improved the way we do things around here no end.

I start every morning by playing in the park with my spaniel. It’s a chance for me to ease into the day and enjoy the countryside around Portskewett, a three-house village near the Severn Tunnel.

The shift schedule changes all the time but I’m quite good in the mornings, so this week I woke up at 0630. It is just enough time to throw a stick around, have some breakfast, and be out of the door for work at 0730.

On a normal day there will be four of us manning the tunnel and making sure the pumps, fans and generators are working properly. The tunnel is manned 24 hours a day, and the leaving crew will brief us on any news as soon as I arrive. After that, two of us will start on the morning checks, while the other two will be up in the control room organising the maintenance schedule.

Each of the tunnel bores are four and a half miles long and the lowest point is 224 feet down. I get to walk that distance every day to look for leaks or problems with equipment, although I am mainly concerned with the pumping systems and making sure the water is kept at the right level.

There are 16 pumps altogether and, depending on the tide, there could be anything between two to six pumps in each tunnel, picking up 28 million gallons of water per day.

There was a problem last year and we were forced to schedule an emergency maintenance in shaft two because both pumps had broken down. We had to react quickly because water levels can rise to rail level in less than 20 minutes.

Divers had constructed a dam, which was supposed to hold the water while we replaced the pumps, which unexpectedly burst and the levels in the sump were rising fast. We were forced to use a tiny household pump to drain the flow and it took us an exasperating 12 hours before we could even begin to fix the main pumps. Most of the pump-valves do not need to be anywhere near fully open, so we controlled the water reaching the dam with them in other shafts.

The morning checks take about two hours and then we start on the day’s maintenance schedule. This could involve anything from tightening a few nuts and bolts to a full pump lift. The pumps use a vortex type system with impellers spinning to cause suction but, with so many moving parts, they require maintenance at least once a year.

Depending on the depth of the shaft, they are broken into 20 pieces and we attach clamps to lift each piece out at a time. It takes six of us and a crane to lift the eight tonnes of iron, and although a pump lift is the most stressful part of my job, the teamwork required makes it by far the most rewarding.

When I started here I didn’t even imagine there was more than one main shaft, but I’ve come to love them, although there is one in particular - “the glory hole”, as we have affectionately called it, is just under the rail tracks and is where the water from England meets the water from Wales.

It’s pretty amazing to see it dance and sparkle and it is great fun going down there. There is a lot of ballast and silt, which gathers in the glory hole, slowing down the pumps, so we employ divers to erect a temporary dam so I can filter out the muck.

I am asked how I get by with being soaking wet all day but I don’t mind, as long as I have some leggings and an overcoat I’m fine. You would be surprised at how dry and clean we keep the place.

At the end of the shift I’ll head back home to take the dog for another walk. I like to see the springs around the local valleys because the water there goes into a sinkhole, which eventually arrives at the tunnel. I’m obsessed by it all and I always have been, especially as I actually get to see the movement of water.

I will potter around my garden for a bit, as all us country people like to, and then I’ll be in bed by 2200. The job is quite tiring, as you might imagine, so it doesn’t take long for me to settle down and get ready for another day.”