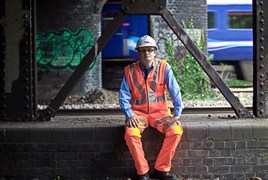 “My role is to respond to graffiti, trespassing and anti-social behaviour on the railways, but we also have a standard maintenance schedule to get through (such as signal boxes and gates). Removing leaves on the line that cause wheel slip is more of a priority in autumn.

I am constantly checking hot spots for signs of vandalism. We receive most of our information from calls to the control room. Passengers, police and workers from all over the industry let us know what is happening on the network, and it’s my job to investigate.

School holidays are our busiest time. You wouldn’t believe some of the things that I have seen.

A recurring problem is when kids think it is a good idea to tie a brick to a piece of rope and hang it off the side of a railway bridge. It hangs there until a train (running at full speed) hits it head on and cracks the front window.

When a report like that is made, the control room contacts the nearest mobile operating manager (MOM) to drive straight to the scene. When I arrive, the first thing I look for is enabling and access points, such as how they hung the rope and were able to reach that point.

If they are still there, I will take one of two approaches. If they are relatively young or there’s only a few of them, it is best to confront them about the situation, and more often than not, they will respect the uniform. If it is a large group of youths, I’ll stay further back, call the police and videotape what they are doing.

But those incidents are nothing compared with when kids lay sleepers on the line (which happens just as often). There was a problem a couple of months back near Pentrych on the Cardiff line - a train had hit a planted sleeper, forcing an emergency stop.

I checked the driver and passengers were OK, and the BTP and I got straight to working out how the kids managed to get onto the line in the first place. We found a gap in the fence that we could block up, but it was a very hectic situation.

There were quite a few different agencies running around, all with their separate roles to play, but it was great to see everyone working together to get the network moving again. You don’t have the opportunity to see that kind of teamwork in many other jobs.

We work shift patterns that keep at least one of the MOMs patrolling at all hours. I prefer the 0600-1400 because it means I am back in time to see my kids after school. I arrive at the office in Radyr, Cardiff, at about 0550 for a one-on-one brief with the duty manager and to look over the control logs to find out what happened while I was off shift.

I don’t have a set time for lunch, which means I usually end up eating on the run.

There are about 600 MOMs in the UK, including six local operation managers in South Wales (normally with three MOMs at their disposal). There are only two of us that cover Cardiff to the Valleys, and the Newport area is included at night.

My 4x4 carries every piece of equipment I might possibly need in the back. When I am out of the office, I work alone and so I need everything to hand. Some people ask me if it’s a lonely job, but the rail industry is a close-knit community and all of the signalmen and rail workers will have a chat when our paths cross.

They will tell me what has been happening in their area and it helps us find ways to improve our role - such as the Scarecrow Scheme, where we started hiring uniformed rail workers in the late 1990s to patrol hot spots as a deterrent to vandals. It had a real impact on cable theft because the thieves needed time to fill their van and they didn’t have that with the Scarecrows around.

One incident of constant cable theft was in Penarth. There was a road access to the edge of the tracks, unused by any traffic. With video evidence from the Scarecrow Scheme, I went to the Welsh Assembly and managed to get the area sealed off so there was no easy way of transporting the cables away - stopping the thefts altogether.

I do feel like I make a difference to the industry, but my job is not always fun. When a fatality occurs, such as the one at Cardiff station last year, it is my job to remove the body from the line. Someone has to do it, and I have the stomach to organise that situation and hand over the body to the authorities (even when crowds are watching).

I will finish for the day just after 1400 and head straight back home to Pontypridd, just in time to pick the kids up from school.

I’m a family-oriented kind of guy and we like to settle down in front of the TV together, before bed at around 2100. Then I’m up early to find out what happened on the network while I was away.”