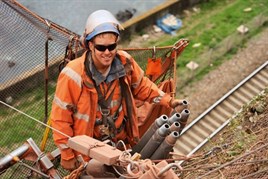 “The South Devon Sea Wall runs along the south coast of Devon following tidal water for 13 miles. Our job is to stabilise the rock faces with steel rods drilled into the wall, which involves hanging from the top on a metal frame (A-Frame).

The alarm goes off at 0630 leaving just enough time to feed the cat, eat some Crunchy nut and be yawning in my car by 0650. I’ve always been an outdoor type of person. An office job would suck the life out of me, but preparing to hang off a cliff is a great reason to feel good first thing!

I’ll have packed my lunch and bright orange overalls the night before to be on site for briefing with the rest of the 13-man team at 0715. I abseiled every week with friends when I was younger, so you could say this job is my calling, but when it is raining and it feels like an inch thick layer of wet dust is on your face, it can be hard to think that way.

At the beginning of the day
I pick up a map, the plan for the day and the drill diary from the supervisor’s office. Everything is closely documented, so nothing is left to chance. As soon as I am changed and attached to the harness, the Spanner-man and I are alone, for the most part, until lunch. We have a foreman overseeing the work at the top of the wall and a supervisor’s office on site, but two of us hold the drill and work directly on the rock face in each A-frame.

The target is to complete three rigs a day, but since the weather has been so kind lately, we are finishing up to six. We drill a metre at a time and then clean out the debris, allowing it to fall into the protective mesh. It goes without saying that a rock on the line would be catastrophic, but the nets and rigs are tested every day to make sure everything is caught.

The holes are drilled in a vertical line 1.25 metres apart, five inches wide and ten metres deep. When the steel has been inserted, I grout over the gap and smooth it down before moving on to the next one. It takes just over an hour to get from drill to grouting, so I see the day as a series of mini projects.

I remember the first solo drill on this project - I was given the hardest section of the entire wall, near Parsons Tunnel. The job is difficult at the best of times, but this section was full of uneven shelves and dips which made reaching the section very difficult.

I positioned the frame at an uneven angle, causing it to shake when I drilled, but it was a challenge that I refused to complain about. I have always been taught that if you work hard, you will be given more work so I got on with it, apart from a little wobbling. I always point out that section to my friends when we go past on the train and let them know how proud I am, but they still don’t believe I did it.

The whole team gets together at midday to eat in the canteen, or the café down the road, if we are treating ourselves. Obviously we don’t have much time to chat when we are on the rigs so it’s a great chance for us to relax and get away from the heavy equipment.

We are supposed to take an hour, but it doesn’t take that long to eat and I can’t wait to get back to the view from the top of the wall. It is stunning and surprisingly busy with ferries, boats and trains constantly passing by. People do wave at us and it is great that everyone knows that we are securing the safety of local transport and maintaining a beautiful landmark. I get the chance to look around when I’m moving, and last week I looked out to see dolphins playing in the sea. The sun was out and it was the first time in my life I had seen dolphins so it is one of those times you have to take a moment to enjoy it.

We all like to get our hands dirty and switch around on the wall. It’s not like a factory line, one person doing a specific job and then moving on. It all depends on your skill set, but whoever is free moves and helps out on another frame.
I enjoy the grouting, so I’m always available if I get a call from someone else asking for a hand and it’s not hard to swing across the wall.

The day ends at 1800 and we tidy up every piece of equipment into the locked container, positioned out of the way so only cars can reach it. We don’t leave anything out for the public to see, so it takes a good 20 minutes to clean. When you are finishing a physically demanding nine-hour shift, hauling around heavy ropes and rigging equipment is not what you want, but it’s quick and painless.

I have given up trying to keep the shower clean because by the time
I reach home I am covered from head to toe in red sandstone, although it is the red on the sofa which especially annoys my dad.

I will have made my lunch for the next day when the yawning becomes too frequent and my arms begin to ache. I will be in bed at 2230 and by the time I close my eyes I’m asleep.”