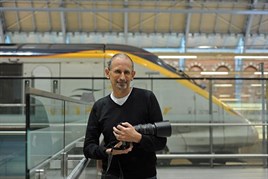 I normally start work about 0600, but it depends on whereabouts I have to travel to. I always catch the train to any train job because I don’t think you can you expect to understand the industry if you don’t use its product. I can get several jobs in one day and it depends on the client as to how long you spend working, with 12-hour days not unusual.

I can spend the time on the train travelling by working on my laptop - quite often editing pictures from previous jobs for various clients. The beauty of some operators is they have Wi-Fi so I can spend a couple of hours sorting and sending pictures. The two best TOCs for Wi-Fi are Virgin and Grand Central in my view. Having Wi-Fi helps a huge amount. For example, I could do a job in Manchester and if the client needs pictures quickly I can email them on the way home.

One of the beauties of this job is the incredible diversity of what you get asked to do. If I’m working to a brief and I know what the client expects I can prepare for it, but sometimes I am given the vaguest of briefs and you have to use your experience, initiative and creativity to get the job done. It’s nice when clients tell me to do what I do normally because this shows a good level of trust. RAIL’s Day in the Life feature is a classic example. One picture was of a guy abseiling at the cliffs at Dawlish in Devon. I had to go through a full safety briefing because I had to abseil down the cliff to get the picture, but had done abseiling before as a hobby so I am not afraid of heights.

RAIL’s modern images section, meanwhile, is about getting pictures of the industry in a different light and telling its story through pictures. Taking pictures of trains is easy because they are on rails, you know where they are going to go and it’s not particularly technically challenging.

Although most people are good, some can be challenging.

People can be challenging though because you sometimes have to put them at ease. Normally if the job involves photographing people it is pretty straightforward. There is a short safety briefing at the station and I spend time talking to them to put them at ease. To get a good portrait picture of someone you need to get them to feel relaxed so they look natural and not forced in the picture.

I had one person who had won an award at the National Rail Awards who was so nervous of having her picture taken she told me she did not even let the photographer at her wedding take her picture. To get her to relax I didn’t get the camera out straight away and kept talking to her while I was taking pictures. Allowing her to talk about the things that make her happy helped and I got the picture I wanted.

You do not want the photograph to be forced: you want people to look natural at work as if you are not there. Sometimes people don’t want their picture taken and you deal with this by finding someone who does, as long as you explain what you want they are fine.

It’s also challenging when it is a media circus and you have the television companies and that media scrum all trying to get the same position. You have to grab the moment - and it is a real buzz - but with experience you learn to anticipate how you can take a different shot from everyone else and be professional enough to get what you want.

To celebrate the end of West Coast Route Modernisation phase one and the launch of a new timetable Virgin Trains set a new record for the fastest rail journey between Euston and Manchester in 2004. I had an element of control over the picture but there were lots of other media there as well looking to get a picture nobody else had.

At the time I was working for Virgin and knew what to expect. This helped me get the picture I wanted, which was Tony Blair with the Virgin lovelies clapping and laughing along with Richard Branson.

I have been a rail enthusiast since I was a child and know what I am looking at and what people want – and I know I’m very lucky to be able to make a living from my interest.

It’s not always an easy job and the hours can sometimes be very long but worth it both from the enjoyment I get from doing it, and hopefully that readers
and clients gain from seeing my pictures.