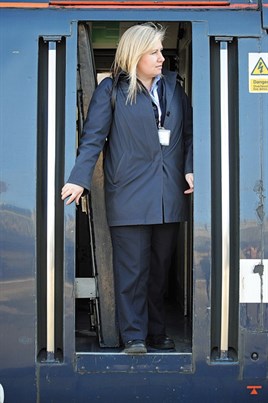 “There’s no such thing as a typical day for me. More often that not, however, I’m on ‘early turn’, which means signing on at Newcastle station at 0400. Since I live south of Durham, the alarm goes at 0245.
I’ll have packed my kit - food, lamps and so on - the night before, so it’s simply a case of coffee, then jumping in the car. The single advantage is I’m the only person on the roads.
I sign on using a telephone; there’s no one actually there, it’s all remote. This can be quite a solitary job if you want it to be, but there’s plenty of chance to socialise during personal needs breaks if you want it.
Once I’ve signed on, I check the operational notices before walking out to the platform to find my train. I could take on virtually any NXEC working - northbound, southbound or perhaps something that’s just come off Heaton (NXEC’s Newcastle depot) and starting from here.
If I’m relieving a driver, there’s only time to say hello, swap the driver’s keys over, and quickly discuss how the train’s behaving before you’re off.
If you’re taking over a fresh train there’s still lots to do - brake tests, lights, the headcode, punching your details into the ‘black box’… plus coffee, of course - and that can take 15 minutes.
When I’m under way it’s all about concentration. Things are happening all the time - you never quite know when something will go wrong, a problem with the train, a signal failure, a diversion, or maybe a fatality. Thankfully I’ve never had one. I have, however, been driving the following train. It goes through your mind then.
I’ve had a few close shaves, for instance with kids playing chicken. You have to tell yourself, it’s not you, they shouldn’t be there. The worst thing that ever happened to me was running over a herd of cows.
To be honest, I try not to think about it, otherwise you wouldn’t do the job, would you? I just concentrate on keeping myself and my passengers as safe as possible, all the time.
I have to make sure I’m always alert - making sure I’ve enough to eat, coffee when I want it… not too much though, as I can’t use a toilet until my break!
Everything is always changing: you can go into one end of a tunnel and it’s a beautiful summer’s day, and come out the other end to find drizzle and the railhead slippery. All of a sudden you have to change your driving style… make it much more defensive… and all the time you’re signal sighting, driving the train - everything’s going on around you. It’s the challenge, and that constant change, that makes it so rewarding.
I see a lot of wildlife, and the scenery is never quite the same as the day before: I’ve seen fantastic sunrises when most people are still in bed. They almost make up for the early starts, but not quite!
A typical day is seven or eight hours long, although at weekends it can vary from six to nine. If I start with a London-bound train, I’ll get a 1-11⁄2 hour break at King’s Cross, where we have a swanky new mess room that’s just opened. Then I’ll drive a northbound train as far as Newcastle, although sometimes I might find myself as a passenger for part of the journey, depending on how the roster works out.
My favourite bit is heading through Durham - it’s that fabulous view of the cathedral which I still love every time, but also the feeling that I’m really driving the train… with the curves and cuttings you get the sense of speed, you really have to make it all work. Through the Vale of York and on the flatter sections it’s just not the same.
Maybe that feeling’s stronger because I’m from round here. My family had a farm at Yarm and we used to watch steam trains going over the viaduct - sometimes coal used to drop down on us. But it was seeing a High Speed Train at Darlington much later that really made me say ‘I want to do that’.

The ultimate challenge
For me driving the diesels is still the ultimate - it’s a challenge and you feel like a real driver. The electrics (Class 91s) either work or they don’t - they almost feel like an overblown tram.
I’ve been with the railway since I was 27. I’d had my own window dressing business before that, but BR advertised for new drivers in the local paper here in Newcastle. And there, in the tiniest letters at the bottom of the page, were the words ‘women may apply’. I joined in 1993, and I’ve never looked back.
At first, the older drivers were uncomfortable - it’s change, isn’t it? But it’s fine now, though we’re still a minority. Passengers do still occasionally give a double-take.
My partner’s a driver, too, so often we’re just like ‘trains in the night’. That’s tough sometimes, but we’re used to it and so are the kids – we have six between us and they’ve lived with it for long enough.
One of the great things about the early turn is being able to pick them up from school. The terrible thing is that, if you’re delayed, you can’t. But I have a great safety network - my mum for instance - you need that sometimes.
Typically, though, on early turn I’ll be booked off at about 1200. I’ll check the notices for the next day - just in case anything’s changed. Then it’s in the car for family time before an early bed. The light’s normally out before 2100.
Then it all starts again…