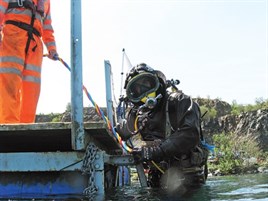 We are quite integral to the running of the railway infrastructure. We get schedules of work from Amey on which of Network Rail’s bridges need underwater examination.

We are actually difficult access inspection engineers, and as well as diving inspections we also offer an abseiling service and inspect confined spaces.∂

All our examiners are degree qualified engineers. I have a BEng in civil and coastal engineering, which is a must for the job so we know what to look for.

For an underwater examination on a bridge for Network Rail we tend to spend a week doing a risk assessment, which involves a member of the team visiting the site and working out the best way to examine the structure. This could be by using a pier or pontoons.

They will then do the paperwork, and draw up a dive project plan which includes a statement of how we will do the work. If we need permission from British Waterways or local port authorities this also has to be done at the planning stage.

Every job is different. It could take a week to get permission from British Waterways to access the bridge. We have to take into account who else is involved and permission from land owners.

It can take a couple of days in the office to plan one dive. We have to identify what we are going to be doing and where we are going to do it, and get all our dive plans and risk assessments done so they are available to whoever wants to see them.

If the Environment Agency has no jurisdiction and it is not a river used by boats, mostly we can get permission from the farmer.

A team of four divers will usually do the job, but on particularly big structures this could be six or eight divers.

It is difficult to say how long the job will take because it depends on so many things.

If there has been heavy rain and the water level has risen the current might be too strong.

We do not dive if the current is stronger than 1.5 knots for safety reasons.

The team only dives during daylight hours as well, to be safe, so this is also another factor.

During an inspection we look at the structure’s integrity to see if there is any detriment below the water level.

We also look for scour, which is erosion of the riverbed material from a structure. This is caused when water runs past the pier of a bridge and as the water hits the pier it causes turbulence and can erode the riverbed.

If it goes undetected the bed material erodes away and the pier becomes undermined, causing the structural integrity of the pier to be brought into question.

A lot of older structures are not built on bedrock and can be eroded away by this turbulence, causing the pier to be structurally unsound.

There is a team of four because this is the minimum standard required by the Health and Safety Executive.

There is a dive supervisor who makes sure everything is safe, a dive examiner, stand-by diver and tender who monitors where the diver is at all times and helps the dive supervisor.

The divers do not carry air tanks on their backs like scuba divers, but instead have a safety supply which means we supply the air from the surface. In any form of commercial diving, this method is preferred by the HSE as it is the safest.

Up to now one of our most high-profile jobs was the Royal Albert Bridge in Devon, and at some point this year we will look at the Forth Bridge in Scotland.

As our diving examinations are done during daylight hours we tend to start at about 8am and finish about 5pm, but longer in the summer. We can only dive structures near the sea during slack tide, which can also vary.

I dived for a couple of years when I was at university as part of my degree, and then did my commercial diving qualification.

After this I joined BridgeZone and did further qualifications regarding confined spaces.

As an engineer there are basically two routes you go down. Either a building site engineer or design engineer designing structures. I saw this job as a bit of both.

It is different everyday and is a nice balance of office and on-site work. I could not sit in an office all day, so this is the best of both worlds.

We also do flood call-outs. For example, if a bridge floods and the water level is breached then what typically happens is Network Rail closes it and can only re-open it after we have examined it. This is an important role we play.

We also offer university placements and have three lads this year working with us who are studying.

When I was at university being given a year’s worth of work was good, and this is our way of giving something back and giving people an experience of quite a niche market.