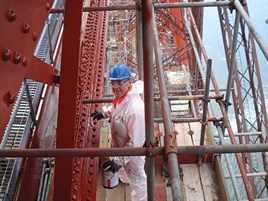 “The Forth Bridge has been in use since 1883 and there is a local pride around here that makes my job worthwhile. It is 361 feet high and has been in the corner of my eye ever since I was a child so, as you might guess, it didn’t take much to attract me to this job.

It was featured on a documentary the other day where it was voted the sixth best bridge on the planet, which reminded me that the world is seeing my work - not bad for a boy from Fife.

I work best in the morning: when the alarm sounds at 0600, I’m ready to go. The early start gives me a chance to eat some breakfast and relax before heading over for an 0720 start. Ten minutes later I will be on the bridge with the rest of the team for a cup of coffee and the morning risk assessment. Depending on the schedule, up to six of us will walk our section and look for any problems or dangers that the night team may have missed - we call it ‘taking five’. We fix any minor problems there and then but anything else is logged and the supervisors will organise an engineer to come out. We have a little safety competition between the team, and your name goes into a prize draw if you spot something. It can get pretty competitive.

Without a doubt our biggest enemy is the weather. I started doing this job five and a half years ago, and one thing I will say is that it takes a lot to stop us. The team and I do everything from painting to repairing the bridge, and when we do come across a problem there is always something else we can be getting on with.

It is very difficult to work through strong winds and rain, but if you are going to work outdoors in Scotland, you can’t let a little bad weather affect you. We can still paint and set up jobs in bad weather, except for torrential rain and ice when it becomes a safety issue. Work is done in sections and scaffolding surrounds the area, like any other building site. We are not attached to the bridge in any way, but being blown off is very unlikely… although there is a safety boat that circles below, just in case. The team comes together for a break at 1000 and an hour lunch break at 1300. During shifts we are equipped with headsets, and that is our only form of communication, but you can’t say much through a muffled facemask anyway. We spend time with each other outside of work and these breaks are our only chance for some banter.

It’s a great working atmosphere when you are with friends, and we have access to a comfy little coffee room on the base level of the bridge. It doesn’t help when a train speeds by and rattles the whole place but I do a lot of work at that level and you get used to it pretty quickly.

I am back on the bridge for the afternoon at 1400, and I’ll be applying the paint, if I’m lucky. Setting up equipment is OK, but time flies when you are spraying the first coat (stripe coat) with an industrial-sized paint blaster. The second layer is applied using a brush, but that isn’t half as much fun. It doesn’t make the job any easier but we wear giant gauntlet gloves because the pressure of the blaster is so strong that the rebound could rip your skin off. I stand on the scaffolding to do most of my work, but any difficult curves or complicated sections are painted by industrial abseilers.

I’m not really meant to look, but when the sun is out I don’t think anyone can resist a little glance along the River Forth. You can see a good 20 miles past Queensferry, which is incredible, but it’s such a pity that more people don’t get the chance too see it. My mother would love for me to quit this job because she is scared of the height but I know her and a lot of my friends are jealous of the view. Whether they have the courage to stand so high up is another matter.

My funnier friends like to ask if my job is a bit like painting the Forth Bridge. I wish it were a never-ending job, because I wouldn’t be out of work when the contract ends in 2012.

Work finishes at 1700, and we hand over the bridge to the four nightshift guys. Then I finally get to drive back to my family in Bellinger, a village outside of Glenrothes.

My wife works nights, which means I feed, bath and look after my two kids after school and then put them to bed around 2000, 1930 if the football is on. I’m quite tired by the end of the day because battling with the elements can be exhausting, but I don’t mind cooking and cleaning a little more.

I will be in bed by 2200, ready to jump out again as soon as the clock reaches six.”