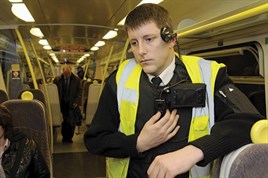 We work in pairs. There is a rota in the office telling us which shift we are on and which line we are working, and the brief is based on big events, school holidays and any problem areas and issues on particular lines.

We cover all of Liverpool and the Wirral. Our uniform consists of black trousers and white shirt, high-visibility jacket, head camera, stab-proof vest and belt, which has a torch, pens, notebook and hard drive for the camera. We don’t carry CS spray.

The head camera is no problem to wear and is the one piece of kit that makes my job easier. We tell people they are being filmed, and if they are going to kick off they know we have got them bang to rights because it is all on camera. People do kick off on occasion, but we can go months without this happening.

People think it is all ‘scallies’ who cause trouble, but it could be anyone.

If they do, you tell them they are being filmed and they usually calm down. If they don’t we call the police.

We are trained in control and restraint, and are allowed to detain people with minimal force. The first time I had to do this was on a man in his 20s who did not have a ticket.

Most of the time people are compliant, but some still deny they have broken any bye-laws. Anyone found breaking a bye-law is automatically sent to the magistrates’ court because bye-laws do not have a fixed penalty system.

It is up to the magistrate how the person is punished - this could be a fine or conditional discharge.

I have had to go to court plenty of times when people have denied they have broken a bye-law, and go there to support the video evidence and give my version of events along with my colleague.

I have seen some interesting ones where people have consistently broken a bye-law and are fined anything from £500 upwards.

The bye-laws cover things such as feet on seats, which is the most commonly broken, to being noisy, playing music too loud, anti-social behaviour and smoking in restricted areas.

In the two years since Merseyrail introduced enforcement officers we have had about 3,000 cases, and in every one the person was found guilty.

This is where the head camera helps. Without it you could have a big argument on your hands, but with it people can see what they have done.

There is still a problem with feet on seats and it is difficult to put a number on it. This happens every day, despite there being 18 stickers in each carriage and a poster. But people still do it even when they are sitting under the poster - some people’s excuse is they cannot read.

If passengers start swearing and become aggressive when we ask them not to do something we take them off at the next station, where the police will be waiting for them.

We have two female enforcement officers. This helps because they can deal with the women whatever the situation, and can make a difference if a man is being aggressive in that he can calm down quicker, but not all the time.

The aggression and swearing is part of the job. I have been called everything, but you don’t take it personally because they get prosecuted.

I see myself staying in the job because I like it and enjoy making people feel secure.

Since enforcement officers were brought in, serious assaults on staff have come down by about 60% and verbal assaults by about 20%, plus generally people have started to behave better.

We also do crowd control at events such as football matches, the Grand National, and the Mathew Street festival on August Bank Holiday, which can attract about 250,000 people.

The football supporters are not that bad, although some get a bit rowdy. But the events are good for breaking up your routine, plus we are supported by the British Transport Police, with whom we work closely.

I have seen examples where people have defecated, urinated and been sick in carriages. It is an eye opener working on the trains, and interesting to see people of all ages acting strangely, but then public transport attracts everyone.

I took the job because I like working with people and want them to enjoy their journey. Most say they are glad to see us.

When I get home I switch off by kicking off my boots and watching television.