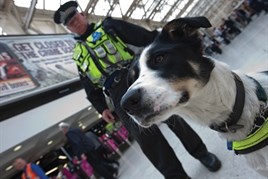 “I use two dogs in my job. The first is a general purpose German Shepherd named Angus, and he is trained to find subjects and search buildings and woods.

The other is a passive drugs-indicating police dog. Rex is a smaller collie cross and he is used to sniff out drugs, usually on people in large transport terminals.

The dogs are not normally needed until late afternoon and evenings, so I’m not out of bed until 0900. They live with me in Tidworth, Wiltshire, and always have priority in the morning, which means I have to feed and walk them before sorting myself out.

At 1100 I’ll walk down the road to Tidworth Police Station and collect the dog van to take them to work. The back is well ventilated and comfortable, but I’ll stop to let them out for a walk around the Salisbury Plains before heading to Blackheath, Lewisham.

I always stop at Blackheath before heading to the day’s location to check my emails, organise the paperwork and pick up the new schedule (planned three weeks in advance but in a constant state of change).

About three times a week we will have an operations briefing at 1430 to run through the day’s plan, and I will inform the team how we can use the dogs effectively. If there isn’t an operation on, I will spend the day tasking scheduled work such as station drug checks.

Some people are a little wary as Rex approaches because he is entering into their personal space. I like to reassure them that it’s either him or me that’s going to sniff their leg - but let’s be honest, he is not the scary one, I am.

With a sense of smell 200 times stronger than a human, Rex can smell drugs that have been consumed up to 48 hours ago (officially) but in reality much longer than that. Under section 23 of the Misuse of Drugs act, if the dog can smell drugs, we have the right to search the person.

Looking after them is a huge responsibility, especially when you are dealing with people who are intoxicated. There is always going to be someone who will try and take a swing at the dog, so I have to keep my concentration at all times to stop that happening.

When a dog is hurt, they can lose all interest in the job and refuse to do it anymore. I was called in to help at the Isle of Wight festival last year and a man tried to kick Rex. As soon as I saw this, I jumped on top of him and restrained him on the ground while another officer moved the dog out of harm’s way.

This doesn’t happen very often because when we need to search someone, it’s usually quite courteous and people will admit they have something on them - you can’t really hide it from a dog. Cannabis is the most prevalent substance we find. A first time offender will receive a warning form that goes on the system, second is a fixed penalty of £80, and a third strike is a trip to court.

You can’t expect a dog to work for five hours straight, so I do it in 30-minute stints and then reduce that as the day goes on. Only one dog will be out at a time, while the other stays in the van.

If I’m lucky enough to be working with another dog handler, we will switch over, but that is unlikely because there are only 60 British Transport Police dog handlers spread into seven groups (Scotland, the North West, the North East, Wales and the West, London North, London South and London Underground).

At 1830, I’ll have an hour break and relax in the van, which is basically my office. I don’t have access to a computer during the day and I am reliant on information being sent to my mobile phone.

The area I cover includes Kent, south of the Thames, Hampshire, Surrey and Sussex, Bournemouth and then all the way to Weymouth. It is a pretty large area and if a request for me comes in from the operations department for anywhere else, it’s given to the chief inspector, approved by the superintendent and then I’m called directly.

On November 29, I was called in for crowd control at the FA Cup game between Aldershot and Millwall, which caused huge problems at Waterloo station. The two sets of fans met each other and all hell broke loose.

We formed a line by the Central Arch next to the main concourse to separate the fans until they got on the trains. I used Angus on a short leash to bark and keep people back. They say that a dog is worth 20 police officers in that situation but Angus was still forced to bite three people because they didn’t get the message and continued to make trouble.

At 2100 I am given a dog care hour, which is used for looking after the dogs. But as they live with me, it is an opportunity to get them back home and look after them when we are there. That means another walk, feeding and dropping the van off.

We don’t usually get home until midnight and by that time all three of us are ready to collapse. I’ll be in bed by 0100 with the dogs asleep in their kennels.”