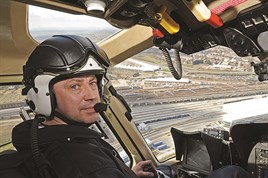 “If there is one thing I enjoy most about my job, it’s that no day is ever the same. Depending on the schedule, and how lucky I am, I’ll roll out of bed about 0800 to the sound of planes taking off and landing. I live in the north with my family, but work takes me all over the country, which means five days a week I end up staying in any number of airport hotels. The helicopter was based at Rochester this week, so all I had to do was get up, have a bit of breakfast and stroll down the road, obviously nothing too stressful first thing.

Most of the groundwork is done before I arrive, so I’ll begin by picking up the schedule and briefing the passengers. I’ll introduce myself, have a quick chat and then it’s straight to the camera to do the morning checks.

We normally travel with one pilot, myself on the camera and a few experts sitting in the back, depending on the job, of course. The BTP and Network Rail send us information everyday, so it’s my job to know where we are going and let the engineers, surveyors or whoever is with us know the details. Unless we’re waiting for permission to fly we’ll be in the air within the hour, and I’ll be standing there like a cabin crew air steward going through the usual safety bits and pieces.

Once in the air, I’m looking for any problems on the lines. There’s always a plan, but along the way I’ll keep my eyes open for unexpected faults or criminal damage that need reporting. It’s my job to flag these up, take video images and communicate them back to base.

The job is mentally draining and requires me to stay focused throughout the day, but all the pilots have worked in the rail industry before and we always have someone on board who is watching for something specific. It’s a great help to know that all I really have to do is keep my eyes open and feed images to the passenger monitor in the back.

I’ve been working for the PDG helicopters since 2007, when I passed my level two Thermography qualification at the Infrared Training Centre. I saw an advert for the position in the same year and I guess I haven’t looked back.

The helicopter is vital for gathering network information, and when we spot something that nobody else has noticed it becomes very rewarding. I remember a problem a few years ago on the east coast near Letford, where we discovered a possible de-alignment on an active stretch of track. There’s not many times that we will see major problems such as this, and we’d usually call it in for further research, but we had to make a gut decision there and then. I contacted base and made a detailed scan of the area. We soon realised that it was too dangerous to be left the way it was, and all services on that route were cancelled while engineers rushed out to fix it. I was told later that the line wouldn’t have been able to take the stress of a heavy vehicle and we had avoided a very dangerous situation.

You have to be on high alert all the time and it can take a lot out of you, but we’re a close group and we keep each other going in the sky. The job is a major advance for the rail industry and I have to take a second sometimes to realise how lucky I am to spend my days doing it. It allows us to monitor a network that runs 24 hours a day with the freedom and reliability it deserves, so how can I not enjoy it?

People say I’m lucky because I get to see so many places, and of course I glance at the scenery now and again, but I don’t have the opportunity to look out of the window because I’m just too focused on the job in hand. Although I will admit that my favourite place to travel is Scotland, but that’s only because I’m fascinated by the geology up there.

We’ll stop at the nearest airfield (with toilet facilities, thankfully) for lunch and get a chance to relax for an hour while the helicopter takes on fuel. There is a small window of opportunity to explore, but by the time I’ve eaten and taken a minute to relax we’re ready to go again.

We’ll fly for a few more hours and head back to base to pack up the logs and equipment.  This is the easiest part of my day because all that’s left to do is debrief, upload the images and sign off. Then it’s back to the hotel for a chance to sit down and have a meal with the pilots, although the bar is a no-go area for obvious reasons. By 2000  I’m normally so drained that I don’t have the energy to do anything else except relax, watch a bit of TV and prepare for the next day. So, unless it’s my day off, I’m off to bed early and then back up ready to go again by 8am.”