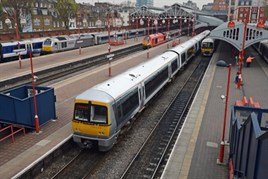 Hidden away at London Marylebone, as you walk through the archway off the station, is a small door. This is the entrance to Chiltern Railway’s headquarters.

It’s perhaps fitting that this small door is so unassuming, because Chiltern doesn’t really seem to attract many headlines - it simply gets on with its work.

Granted, it claimed the Operator of the Year prize at RAIL’s National Rail Awards in 2012, and there is infrastructure work in place to re-open railways, but its performance rarely makes the headlines, as it is consistently good. Its management team rarely changes, and it is a long-term franchise (first awarded in 1997, and due to finish 25 years later in 2022).

The market is a challenging one, yet there is a perception that Chiltern’s performance is good because the line has, for the main, just one operator. Managing Director Rob Brighouse contests this.

“There’s a myth that Chiltern Railways is simple. We use the same route as CrossCountry, First Great Western, London Midland, Freightliner, Direct Rail Services, Colas Rail and GB Railfreight. They all use it.”

Chiltern has cultivated a working agreement with Network Rail that is producing great benefits. NR West Midlands Area Manager Liam Sumpter has only been in the role for six months, but already he and Brighouse have struck up a relationship where they seem to know exactly what the other wants.

Brighouse explains: “Some time ago we put together a collaborative agreement. In terms of putting it together, basically it is a way to tackle issues. But our attitude is: if we cannot sort it out over a coffee, what’s the point?”

Sumpter interjects: “I am not pretending we agree 100%. When we don’t agree, we chat and speak on the phone. But there has never been something where we have to disagree.”

Brighouse backs this up. “Liam wants our passenger trains to run on time. You miss the key thrust if you think he only wants the infrastructure to work.”

This attitude has required a culture change from within the NR staff, as well as from Chiltern. Says Sumpter: “We have done a lot to change the culture. If you talk to my team throughout the organisation, they are all passionate about the railway and what it does. So really this is allowing them to exploit it.”

But what drives Chiltern? It’s all very well working with Network Rail, but what about the passengers - after all, that is what Chiltern Railways is about, surely?
Brighouse says: “I think to me, passenger satisfaction sits at the top. The National Rail Passenger Survey shows we are the highest franchise. What drives that is good performance.”

He is also passionate about safety. He listens to Sumpter explain about a joint focus, and says: “Safety and productivity go hand in hand. I want people to go home safely.”

Sumpter had been speaking about the challenges facing NR on his patch: “We have a joint focus on safety. You would expect that working for Network Rail, but Rob and his team challenge us on it. We are challenged on level crossings and workforce, too. We have visited a possession at Haddenham and Thame Parkway together, and we are both very passionate about that. You may not think that, but we are. It is the basis for sound performance. If they work safer, they work better.”