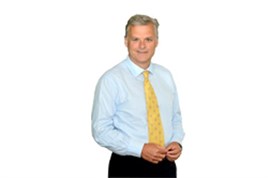 And on the Midland Main Line, an embankment collapse in July 2012 resulted in another freight train rolling down the bank. It could so easily have been the Caledonian Sleeper or an EMT passenger train. Given climate change and extreme weather, does this keep him awake at night?

“An embankment or cutting failure is the highest contribution to train accident risk,” he says.

“We absolutely have to get onto the front foot in the way we assess these risks and the way we manage them. So yes, making sure that the drains are cleared so we don’t get waterlogged is absolutely fundamental, as is putting in place digital measuring systems.

“We MUST monitor the movement of these embankments so that we can predict when they are going to fail. We now use digital cameras on our aircraft to make a continuous digital record of the railway, so that we can then compare the earthworks year after year to see whether things have changed.”

It’s time for another hobby horse… tracksides. I tell him that in a recent journey out of Manchester Piccadilly, bound for Leeds, I was appalled at the enormous amount of debris left at the tracksides after engineering work - the usual mix of sleepers, rails, ballast bags, cans of grease, rail chairs, track screws, sleeper pads, plastic ferrules… it’s a seemingly endless list. Vegetation growing through this rubbish lays bare that it’s been there a long time. Does no one care?

More importantly, I’ve always been told that contractors are obliged to tidy up a worksite before leaving, and that I assume there are NR compliance managers? Given the spectacular failure here across the country, why are these people not fired?

Carne agrees without demur: “Perhaps coming into the industry with a fresh pair of eyes, I also have been shocked at the amount of scrap left on the railway. And yes, I find it unacceptable, so we are going through a programme of removing that scrap and clearing up the railway.

“But it’s important that this isn’t a clean-up exercise. It’s not a one-off clean-up - we really need to change the mindset about what is acceptable, because we want to have a safe place where people can go and work. At the moment, if you have to scramble over old sleepers and bags of ballast with buddleia growing out of it, it’s not a safe place to work.”

Plus, I point out, there is the potential for vandalism and the risk to passenger safety.

“This scrap also attracts thieves. And there is, of course, the scruffy image that this gives to public and passengers as they look out of the window, as you did on your way out of Manchester Piccadilly.

“It’s a big programme, but it’s absolutely something that all the routes are now focused on tackling. South East Route Managing Director Dave Ward was telling me that he’s just finished clearing a tunnel in Kent, and that it’s the first time in 13 years that it’s been cleared of scrap - so we are starting to see real progress.”

Hmmm. Call me cynical, but I’ve had this speech from at least two NR CEOs in the past, and (to put it bluntly) nothing changes permanently. The tracksides remain an eyesore, and an unsafe place for the workforce.

I hope Carne will be different, and maybe RAIL readers can help keep the company’s feet to the fire? RAIL’s Trackside Trash awareness campaign starts here - please send us your pictures, and we’ll publish them here or on the new RAIL website. And we’ll monitor what happens.

Can this problem finally be solved? It’s hardly surprising that mattresses and shopping trolleys are slung over the fence onto the railway, when fly-tippers see the mess the railway leaves itself.

“That’s exactly it, and it’s the same for our own people,” agrees Carne. “If you are in a work team, and you go out and your site is an absolute mess, I’m afraid it sets in train a certain way of thinking about what’s acceptable about the way work is done.

“Whereas if you go onto a site that is spotless, and is kept clean and tidy, then it raises your own expectations about the way you are expected to work and how YOU leave the site. This is why this is a very simple, visible sign of us raising our own expectations around personal safety, and around the environment that we have on the railway.”

So are your RMDs now breathing down the necks of their teams and their contractors?

“They are - and we will be producing lots of before and after photographs so that we can prove we’re winning. I’m determined that a new mindset will take root - that the job’s not done until the site is tidy. Clearing up after work finishes is NOT an optional extra.”

What about devolution? Iain Coucher (Deputy Chief Executive from 2002, and Chief Executive 2007-2010) was an uncompromising centralist. Sir David Higgins (Chief Executive 2011-2014) dismantled Coucher’s Kremlin approach and devolved power to the Routes. Is the pendulum about to swing back again?

“No, it is not!” Carne replies with smiling firmness. “I’m very happy with devolution. I believe in devolving route structure because I believe in customer-facing businesses. I think it’s right that we have local decision-making made by local management teams who are very close to the customer and who understand what those customers’ needs are.

“But let me be clear - I believe in devolution; I don’t believe in independence. We are one company… we are one Network Rail… so there are many things that we have to do in one way, right across the company. The routes therefore have to be both inter-dependent of one another and dependent on central services. This may be because of economies of scale, or it may be because we only want one standard - one way of doing something.

“So yes, we want to innovate at a route level. But at a certain point you then need to say ‘this is the best way, now we are all going to do it.’ We must get that balance right.”

“I think we have more to do. We must minimise duplication, and we must simplify the interfaces between the centre and the routes. But the fundamental structure of a route-based organisation reliant on central services and central technical functions is the right model.”

How will Network Rail look and feel different under his leadership? What will be the clear and obvious hallmarks and characteristics of the Carne era?

“I think I’ve made clear my expectations around safety culture, so I fundamentally believe that’s something that is a real opportunity for us.

“Secondly, I think a company that has the ambition to be better every day, that is striving continuously to think about how it can outperform itself, is a really exciting place to be. When you are in an organisation like that, then everybody is part of the performance because you are constantly trying to find those things that will enable you to do better, together.”

‘Better every day’ - that’s an expression that keeps cropping up?

So what you want is rapid but controlled evolution, rather than big leaps?

“It’s a bit of both, actually. You’re absolutely right that evolution - constant change - is absolutely central, but there are some times when revolution is also necessary.

“The third area that I would want to tackle is technology, and that may be more revolutionary than evolutionary, because I think that the current pace of introducing technological change to the railway is too slow.”

Why is that? Lack of money? Lack of will? Too much bureaucracy?

“The railway is an industry that understandably breeds a degree of conservatism around the introduction of new technology, because the consequences of getting it wrong are so immediately apparent.

“So if you do make a change, and it doesn’t work tomorrow and you have all the trains blocked up on their way coming into stations, it’s all over the media as a damaging news story. That understandably drives a natural degree of caution for more rapid change. But I think we are at a point now where unless we take some bolder steps in terms of the technology, we are going to find it increasingly difficult to deliver the kind of service and capacity that people in the country demand. So we need to start thinking more boldly about how we use technology.”

Are you talking about ERTMS being applied more widely?

“It’s part of the revolution that I can envisage. Traffic management and the accelerated implementation of ETCS, so that we actually digitally control the trains. The term I’ve coined to encapsulate what I’m talking about is ‘the digital railway’. This would be an enormous step forward and would transform the network. It’s a discussion we simply must have - and soon.”