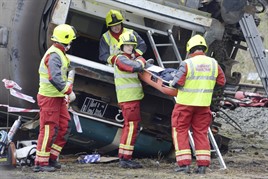 A call comes in to the emergency services control room. A locomotive hauling a tanker with approximately 20,000 litres of molten phenol has derailed, at a junction where the line is also used by passenger trains.

The driver of the locomotive has contacted the local signaller and reported the derailment, and the signaller in turn attempts to place a stop on the line.

But it’s too late to stop a passenger train running into one of the tankers, causing a large leak of molten phenol and derailing one of the passenger carriages. Serious injury or even death could face those who now have to rescue the injured passengers before a fire takes hold.

The driver of the passenger train places a further call through to Network Rail, which in turn dials 999 and asks for the Fire and Rescue Service to report the incident.

It is the ultimate nightmare scenario for emergency services, and for those who have to plan for such incidents. Every emergency situation is different, but planning is essential if the various agencies are to communicate effectively and ultimately ensure lives are saved.

Enter Exercise Rosedale, the codename for a multi-agency response to such a scenario, held on sidings at the Toton Traction Maintenance Depot site of DB Schenker.

Rail freight operator DB Schenker was called upon to demonstrate its expertise and capability in support of a multi-agency response to a major rail incident, with members of the company’s Breakdown and Recovery team taking part in the large-scale training exercise.

Exercise Rosedale imagined a scenario in which a goods and passenger train derailment incident in the East Midlands included the rescue of multiple casualties and managing the risks caused by a chemical spillage.

The procedure for reinstating rail infrastructure with a recovery team also needed to be examined, while DB staff benefited from training and the awareness of procedures to adopt after a train derailment.

The exercise formed part of a unique link-up between DB Schenker and Nottinghamshire Fire and Rescue Service, and will further entail a number of training days at the Toton TMD Training School.

“It is vital to progress the interoperability between all parties involved in rail incidents, to ensure that when they occur all parties have previously trained together to resolve them effectively and safely,” says DB Schenker Safety and Compliance Manager and Co-Exercise Director Marc Binney.

In short - everyone involved in a rescue and recovery operation needs to keep up to date with each other’s methods of working, to ensure that they’re prepared for the worst.

More than 100 firefighters, including specialist rescue teams and officers specialising in dealing with hazardous materials, were involved in Exercise Rosedale. They used a range of fire appliances and special resources including a foam unit, Command Support Unit, aerial ladder platform and 20 fire engines.

Nottinghamshire Fire and Rescue Service Station Manager Richard Cropley, who helped lead on co-ordinating the exercise, describes it as “the culmination of several months of training and planning between Nottinghamshire Fire and Rescue Service, DB Schenker and other agencies”, testing how the emergency services and other organisations co-ordinate their response to a major incident involving both human casualties and a “potentially lethal” chemical spillage.

Cropley adds: “It isn’t often that we get the chance to test our procedures on such a large scale as this. We are extremely grateful to DB Schenker, both for facilitating the exercise and engaging with us so positively in our specialist rescue training programme.

“Naturally we hope we will never have to deal with an incident of this magnitude, but we will always take any opportunity we can to train and develop our rescue skills in a range of scenarios.”

Binney says that in the final de-brief, all the agencies acknowledged the additional assistance offered by the DB breakdown staff during the safe recovery of the remaining casualties from the incident scene.

“The exercise was a resounding success,” he says. “A full report will be compiled by Nottinghamshire Fire and Rescue Service, which is currently collating the objectives and feedback from all the parties involved.

“However, the hard work starts now. We must look to harness all the learning that we have gained from this operation, and share this information between the agencies in order to demonstrate that we are fully prepared to deal with an incident of this nature.”

DB Schenker Infrastructure Standards and Strategy Manager Mark Howard is proud of the professionalism shown by the new Breakdown and Recovery team during the exercise, stating: “These staff are all new to the rail industry and have not been previously exposed to this type of rail incident or recovery.”

He adds that Nottinghamshire Fire and Rescue Service was “very complimentary about how all the members of the team conducted themselves on the day, in particular the way they assisted in the recovery of the casualties”.

Preparation was vital for the exercise, which had its beginnings in a meeting back in October 2013. It included supplying a passenger coach from DB’s asset management team, and setting up the exercise site (which involved moving a large number of stored Class 60s from the location, and removing materials stored on the site). Finally, the rail vehicles involved needed to be carefully tipped, to set the scene.

DB says the exercise has resulted in an ongoing relationship with Nottinghamshire Fire and Rescue Service, while a unique training resource has also been created by filming the whole exercise, from setting up the scene to the re-railing.