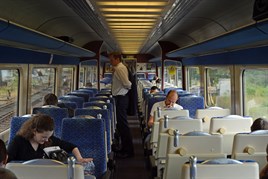 The regions are becoming increasingly vocal in their attempts to access money for rail improvements.

Perhaps the most obvious example is the North, which has long campaigned for extra money and new trains. But other parts of the UK also want and need investment.

Following the devastation at Dawlish in February (RAIL 742), there have been plenty of calls for additional infrastructure investment in diversionary routes. Network Rail has carried out a study looking into the options (RAIL 753), while South West campaigners believe an investment of £7 billion would pay for itself in seven years (RAIL 761). They make a compelling case.

In East Anglia, the sum wanted is much smaller - a mere £476 million. But campaigners there believe that would unlock economic potential worth almost ten times that figure.

The report states that the current average speed of London-Norwich GEML trains is 63mph, resulting in slower journey times than from London to Stoke, Nottingham, York or Bristol (all further distances than the 115 miles between Norwich and London).

There will also be an issue over quality. Currently 18% of peak-hour passengers arriving at London Liverpool Street have to stand (excluding the Metros). And forecasts show demand on the GEML into London from Suffolk and Norfolk is expected to grow by 32%, and from Essex by 52%!

Then there is the issue of subsidies. Anglia’s network operates with some of the lowest in the country. AGA is the second least subsidised passenger operator in the UK, receiving 1.5p per passenger mile. The national average is 12.5p.

And finally, the report states the benefit:cost ratio is between 8.6 and 9.5.

Writing in the report, New Anglia Local Enterprise Partnership Chairman Mark Pendlington says: “The Chancellor’s decision for this Autumn Statement is simple: we ask him to confirm the infrastructure improvements needed to unlock the economic potential of the region through faster and more reliable services; and provide for new rolling stock on the Great Eastern Main Line for better journeys.”

The report says that Norfolk, Suffolk and Essex are “important” because they generate £60 billion in GVA (gross value added) for the UK economy each year, and that this is expected to rise to £75bn in the next 12 years. It is one of only two net contributor regions to the Treasury.

Three million people already live in the three counties, and over the next decade the region will see 205,000 new jobs and 184,000 new homes. The report warns that this will lead to some of the fastest rates of passenger growth in the country, with decisions having to be made as to where these houses will go.

Pendlington tells RAIL: “It is not about turning green fields into boxes on hills. The LEP is working with local authorities to find a solution.”

The report adds: “Our economy, built on the success of innovative and dynamic businesses, is also growing and carries even more potential.