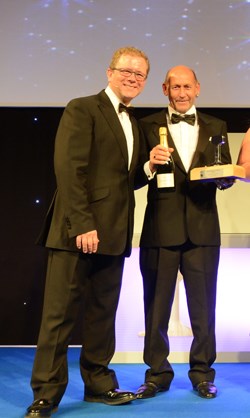 Cleaning passenger trains can hardly be described as a glamorous job. The increasing numbers of the travelling public leave their mark - however unintentional - on Britain’s vast fleet of rolling stock. And all of that stock needs cleaning every day, and prepared to the best possible standards - clean and fresh for the next day’s work.

Described as a “fantastic embodiment of Southern and its values”, Peter Harding has been described as going not just the extra mile, but an extra ten. Well respected by his colleagues and his manager, Harding enthusiastically tackles his work every single day, helping Southern improve the journeys of passengers passing through Eastbourne station. And his dedication earned him the Outstanding Personal Contrbution (Workforce) award at RAIL’s National Rail Awards 2014.

Harding began his career with Southern in its fleet service quality team, initially at Brighton and now at Eastbourne.

As a Train Carer, his role is that of a turnaround cleaner, clearing all rubbish off trains when they arrive at the station. It involves dealing with spillages, and making sure all toilets have a supply of soap and tissue. It also involves making sure the water tank is full - filling it up by hand if necessary.

Harding is never late. He’ll prefer to arrive at Eastbourne up to an hour early, rather than risk getting there even three minutes late.

And while many people would use the time before their shift to relax, Harding is described by his managers as “throwing himself into work as soon as he arrives”.

Like many of the railway’s unsung heroes, Harding prefers to avoid the limelight - he just prefers to get on with things. “There is always something to do, something to be getting on with,” he says of his time at the station.

Harding’s manager, Carrie Askem, knows she can rely on Harding to “drop everything and be on his way to Eastbourne to help” whenever someone is off sick, no matter how short the notice given, committed to giving the best of himself to his colleagues.

Askem says that such is his enthusiasm for the job and the pride he takes in it, she often has to remind him to take annual leave.

“He is always busy and finds work to do to improve our services for customers, going above and beyond his duties. He is so easy to manage, and I know I can always rely on Peter for help. Whenever he gets praise his answer is always: ‘I am just doing my job’.”

Harding has even been described as not only going the extra mile, but an extra 18 pipe reels!

In summer 2013, Askem was asked by the Eastbourne station manager to move tanking pipes from a storeroom. Having discussed the work with Harding, Askem arranged for a van to move the pipes, and said she’d meet Harding the following morning to complete the task.

But Harding beat her to it. When she arrived at the station the following morning, Askem was amazed to see that every single pipe had already been moved.

Harding had arrived early, got the van, parked by the rear of the storeroom, and loaded the van with the 18 very large pipe reels and other items of heavy, awkward equipment. He’d already taken the van down to the sidings, and placed them on a pallet ready to be disposed of.

Everything Askem had asked had been completed - plus more - all before Harding’s shift was even due to have started.

“This is so typical of Peter to come in early and get the job done, and especially to make sure it doesn’t impede on his normal duties,” she says.

Former Southern Managing Director Chris Burchell, who is now at Arriva UK Rail, agrees: “Coming in early to complete a task is typical of Peter, and his selfless actions, dedication to his depot and positive attitude is greatly appreciated,” he said in the NRA nomination.

Harding will have between just four and ten minutes to turn around anything from four to 12 coaches, presenting the next set of travellers with a pristine unit for their journey. His hard work and dedication is clearly appreciated by his colleagues, and often by customers as they board the train at Eastbourne.

His hard work and dedication was recognised by his employers in February 2014, with a ‘Delivering Results’ award in Southern’s internal Exceptionally Southern awards.

In fact, the Executive Board of Southern was so impressed by Harding’s commitment and dedication that they chose him as ‘Winner of Winners’ from all of the individuals and teams topping their respective categories.

“Both the Exceptionally Southern panel members and the Directors and I were impressed with Peter’s undoubted commitment and the huge pride he takes in doing what he can, often in difficult and uncomfortable circumstances, to provide the best possible service for our customers,” said Burchell.

“He is ceaseless in his efforts, enthusiasm and flexibility. He is a role model for delivering results, in the background, for our customers.

“And his efforts on the specific occasion of helping Cassie move pipes from Eastbourne station ensured that our services were cleaned and had working toilets, when people shortages would have stopped this being the case. He shows exactly the sort of can-do characteristics that ensure we do the best we possibly can for our customers, and this deserves to be recognised.”

Harding may just put his outstanding effort and customer focus down to part of the job, but Southern is in no doubt as to how Harding truly makes a difference to the team at Eastbourne and to so many passenger journeys. The last word goes to fellow train carer Georgina O’Leary.

“He’s one of life’s gentlemen,” she says. “He’s a trustworthy and confident friend who no matter what the circumstances are, he is always there to help. When there is a crisis he goes the extra miles, always cheerful and smiling. He’s never late, and he’s never had a day’s sickness in the long period of time he’s been on the railway.”