“I am forever in his debt” 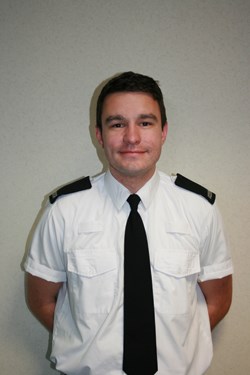 Suicide prevention is increasingly a priority for the railway, with train operators, British Transport Police, the Samaritans and Network Rail all actively seeking to reduce the number of tragedies on the network.

Every year more than 300 people die on the railway, and the number of deaths to suicide is increasing every year, prompting the establishment of a National Suicide Prevention Group to tackle the issue (Wolmar, RAIL 759).

The consequences of any death on the railway are grim - not least for the unfortunate victim, but also for the families, rail and police staff members, and members of the public who are inevitably involved in an incident to a lesser or greater extent.

The NSPG would do well to appraise the role played by one railway staff member in saving a man’s life.

The role of the RNO, who is employed by the train operator rather than British Transport Police, is multi-faceted. A railway equivalent of the Community Support Officer in police forces across the country, it is a role that can take officers anywhere.

After a busy shift over the Christmas 2013 period, Lenton was off-duty when he encountered a man who was about to take his own life at Hassocks station, between Burgess Hill and Preston Park on the busy Brighton line.

Lenton himself chooses to avoid the limelight, but it is the letter that was sent to Southern’s customer services team that best tells the story about how his actions saved the man’s life.

The man wishes to remains anonymous, but has described himself as “a gentleman whose life is for the better”.

He wrote: “Just after Christmas, heading into the New Year, I found myself in a tough place. I was between a rock and a hard place. I was finding times hard with the loss of a family member. I couldn’t handle it, and one morning I found myself sitting outside Hassocks station thinking things would be so much easier to step out and end it all.

“I was there for only 10-15 minutes, standing across from the station, it was obvious I was upset, when I was approached by a guy. He asked if I was alright, and this was enough to set me off - the fact that someone had noticed me and the state I was in, I literally burst into tears. He told me his name was Matt Lenton, and that he worked on the railway.”

The man then described how Lenton helped him further.

“He offered to chat to me about everything, and he gave me a lift to the garden centre café where he brought me tea and even a cake. I opened up to him, and he sat and listened to everything I had to say, and it was just what I needed.

“I explained to him that I felt as if it was easier to just end it all. He took the time to sit and talk to me, and reassure me that everything has its purpose in life and that things could only get better. He was absolutely brilliant.

“He gave me the details of the Samaritans as well, and said they could also help. He himself had things to get off his chest and, as selfish as it sounds, it was comforting to know that I wasn’t the only person who was experiencing a tough time.”

The man continued: “Before we knew it, hours had passed and I found myself feeling so much better about myself and the situation I was in. He offered to take me home and asked if I was going to be OK. He took the time to drop me home and spoke to my daughter about where I had been.

“I assured him I was going to be fine, and that thanks to him I felt much better about everything. I did say I would contact the Samaritans as well, just to chat everything over.

“It was then I asked what he actually did on the railway. He said he was an RNO, which he then explained is a Rail Neighbourhood Officer with Southern Railway. He then said: ‘Look, if you ever need someone to talk to on a personal level who isn’t a helpline, give me a call.’ And he gave me his mobile number. I thanked him, and off he drove.

“Let me just say, that if it wasn’t for the kind, considerate nature of this guy and his ability to see the need in others, I may well not be here today. He changed my outlook on life, and I now live every day to the full. My daughter and her partner are expecting their first child, so I’m going to be a granddad, something I could have missed if it wasn’t for him.

“My family and I are forever thankful, and I have recently called him to tell him. He congratulated me and my family, and explained that this is a prime example that things do get better.

“He took time out of his day to speak to me - his own time to ensure I was OK - a true selfless act. I am forever in his debt.

“Finally, please forgive me for not giving my details, but I would rather it be kept this way. Matt knows who I am, and that’s all that matters. He is a true example of a person who deserves credit for the way he is.

“If you could pass this on to his manager, whoever runs the company, that would be great. They should be aware of the effort he puts in outside of work.”