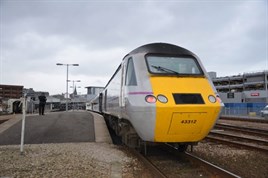 Sunday March 1 2015 marked a new era on the East Coast Main Line - that’s if you accept this cliché means a different coat of paint for the same trains, replacement badges and waistcoats for customer-facing staff, and a new menu for First Class passengers.

As new incumbent Virgin East Coast has warned us, it will be 2018 before we really notice the difference, when new rolling stock comes on stream. This promises to be a spectacular leap in quality because some of what’s currently flying the flag is heading for its 40th anniversary - and it’s very tired.

Clear evidence that the East Coast has been drifting off course for too long was powerfully exhibited on the final 1452 Government-run East Coast train from Aberdeen to London King’s Cross on Saturday February 28. For this admitted last run devotee, it was repeating an identical journey on December 8 2007, when Great North Eastern Railway (GNER) was bowing out after 11 years of frustrated ambition and indifferent delivery.

It was going to be a long journey with 18 stops. Engineering work between Doncaster and Peterborough extended the journey time by over an hour (to eight and a half) as all ECML services were diverted via the GN/GE ‘Joint Line’ via Lincoln. It’s a route that is still bedding in after extensive investment in new signalling for its forthcoming role as a diversionary route for heavy freight.

It is rather sad to report that so little had changed in almost eight years. The phraseology that I used in RAIL 581 still holds true: “I have come to realise that there is no time for nostalgia on our fast-moving railway, where only success is measured, and few people have patience for commercial failures and has-beens.” There have been two more since these words were written.

RAIL readers who were around when Stagecoach/Virgin Trains took over West Coast, the other principal long-distance south-north inter-city franchise, back in 1997, will recall that it took some effort to make an impact on service performance and quality because it had inherited a fleet of superannuated rolling stock that was falling apart after 30 years of constant use between London Euston and Glasgow. History is repeating itself on former LNER tracks out of King’s Cross, where High Speed Train sets, in particular, are unable to deliver the kind of service we expect on a premium route.

Highly charged, well-organised, anti-reprivatisation protest marches on East Coast’s final day were organised, conducted by the RMT Union in Edinburgh, Doncaster and London. However, on my entire 500-mile journey, I could not detect the slightest bit of interest from any of the train crew or passengers, in these actions of idealists.

RMT General Secretary Mick Cash’s comments about past alleged misdemeanours by GNER and National Express therefore fell on deaf ears: “It has been left to the public sector to not only rescue this vital north-south rail link from total meltdown, but to turn around its performance and to start handing hundreds of millions of pounds back to the taxpayer - in contrast to rip-off private companies.”

Yes, pay and working conditions issues concern on-board staff, but so does the tantalising promise of new rolling stock in 2018. GNER said it would deliver, but didn’t. Will Virgin?

Staff have been given a new Virgin East Coast tabard, a new name badge, and a Virgin pen and keyring, during preliminary briefings, with the subliminal message to hang fire on criticism during the rolling stock procurement interregnum, and doubtless sympathise with passengers equally keen to see a radical shake-up.

Now the farewell train itself. Aberdeen is giving its traditional farewell to East Coast. In 2007, a photograph in RAIL shows a solitary enthusiast at the end of the platform bidding goodbye to GNER. It was the same this time; a different figure, somewhat more elderly, who had earlier been speaking to a First ScotRail train crew friend, took a single photograph, and then meandered back towards the main concourse before the train had even revved its engine to depart.

It is difficult not to draw comparisons with two verses of Charles Woolf’s famous 1817 poem The Burial of Sir John Moore after Corunna:

Not a drum was heard, not a funeral note,
As his corse to the rampart we hurried;
Not a soldier discharged his farewell shot
O’er the grave where our hero we buried.

Few and short were the prayers we said,
And we spoke not a word of sorrow;
But we steadfastly gazed on the face that was dead,
And we bitterly thought of the morrow.

So there we were - the lightly loaded 1452 departure from Platform 5 was formed of the stock of the incoming 0710 from Leeds, having spent an hour in the refuelling bay on the eastern side of Aberdeen station, where litter from the previous six-hour journey was cleared, water tanks refilled, and the buffet area restocked.

Since HSTs took over East Coast passenger services north of Edinburgh in 1979, these actions have been performed about 13,000 times, so it is not surprising that the HST fleet looks worn out, is no longer fit for a top-end service, and now rides quite badly. We are told to hold our breaths; all trains will receive full Virgin Trains East Coast livery by the end of August, and £21 million will then be invested before August 2017 refreshing toilets, and replacing seat covers, carpets and table surfaces.

A keen analyst who had chosen to live on a tropical island for over 35 years and come back for the final Aberdeen run would have noticed that rear power car 43095 is still on duty, albeit re-equipped with an MTU power unit, and renumbered 43295 as a consequence. Since it was completed by BREL at Crewe Works in September 1978 it has carried BR’s yellow livery with a blue flash, ‘InterCity Swallow’ white and red, GNER dark blue, hybrid National Express blue and white, and most recently East Coast grey with mauve lettering. Will Virgin red take it out of gauge? British Leyland was also still building Austin Allegros and Morris Marinas when the leading power car 43312 (ex-43112) was completed at Crewe Works.

Again, I repeat my words from 2007: “GNER tried (and largely succeeded) to establish a brand name synonymous with great ideas, sharply focused senior managers, a determination to set high standards, and staff befitting one of Europe’s most established high speed services, winning industry awards and accolades that justifiable flowed into its York headquarters offices regularly.”

Pity GNER for having to start out with vehicles whose interior decor was already eight years old (in the case of the Class 91-hauled Mk 4s), and much older in the case of HSTs. It was only towards the end of its franchise that the Mallard refurbishment programme came on stream. Standard Class passengers had a new level of comfort with high-backed seats (albeit with little legroom and in aircraft-style formation that resulted in a scramble for the few with tables and a full view out the window). Today, those ‘Mallard’ interiors are poorer than ever, with the beige upholstery in First Class often heavily stained, and occasionally frayed or torn.

Was it poor track north of Edinburgh? The ride quality of the East Coast’s last southbound service was particularly poor in the carriage ends over the bogies, and passengers grumbled about noise, a non-working PA system, sporadic heating, automatic vestibule doors that failed to open or close effectively, and end door windows being left open and sending wafts of freezing Scottish air whistling down the carriage aisle.