Dawlish is back in business 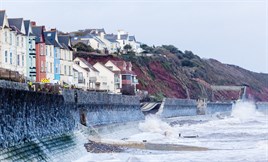 Dawlish was celebrating on April 4, as passenger-carrying trains returned to the Devon coastal town for the first time in exactly two months, since Mother Nature conspired to destroy a 100-metre section of the iconic Brunel Sea Wall.

Hundreds of well-wishers lined the streets surrounding the railway station, stood on the sections of the sea wall that were open, and enjoyed the opportunity to visit the beach once again.

More than 7,000 trains had been cancelled since the last one ran directly between Exeter and Newton Abbot. Yet none of the local media reports of the re-opening - both on the day the line re-opened and the day before - was negative.

Instead, people spoke about how an old friend was returning to them, how it would benefit the local area, and how impressed people were with the efforts of those who worked so hard to get the railway running again.

Yes, as council and industry leaders have pointed out, the region has suffered tremendously. Hundreds of millions of pounds (maybe more than £1 billion) have been lost off the back of the South West peninsula being cut off from the rest of the rail network.

But Network Rail’s ‘Orange Army’, as locals christened the massive workforce, has earned the railway a lot of brownie points through its efforts to get the area reconnected as fast as possible. The efforts have been appreciated.

On April 4, Prime Minister David Cameron visited Dawlish. Catching the 0706 from London Paddington at Exeter St David’s, he alighted at the rebuilt station to greet the ‘Orange Army’.

“This is a great day for the hard-working people of Dawlish, and for businesses and commuters across the South West whose lives have been turned upside down by the devastating loss of their train line,” he said.

“Back in February, when I visited the town to see the damage for myself, I promised to do everything I could to get this vital artery back up and running as quickly as possible. I am delighted to say that promise has been delivered today. A promise that says the South West is well and truly open for business.

“The impact of the extreme weather shows the importance of making our railways strong enough to weather any storm. That is why we announced a £31 million package of improvements, and asked Network Rail to examine every option to ensure the resilience of this route - all part of our long-term economic plan to boost business and create more jobs in the region.”

“Our army of engineers has done an amazing job of putting back together a railway that was ravaged by the elements,” he said.

“They have overcome every obstacle thrown at them, winning many battles along the way to restore this critical piece of the network, ahead of schedule and in time for the Easter holidays.

“The biggest thanks must be reserved for passengers and local communities and businesses, who have been hugely supportive and patient over the past two months as we worked flat-out to rebuild this vital rail link.

“Our focus now moves to the medium and long term, looking at what can be done at Dawlish to make the current coastal route more resilient and, by the autumn, understand what the best viable relief route might be.”

NR Project Manager Tom Kirkham said: “The only reason we have been able to open the railway today is due to the monumental efforts of all the people who have worked night and day to meet the deadline.

“It has been a genuine team effort, from the guys installing the container breakwater during howling storms, and the roped access teams scaling the cliffs, to the track workers pushing all the way to cross the finishing line.

“We have had incredible support from outside groups, including the fire and rescue service, the police and the army, each of whom have contributed enormously. The local community’s support of the ‘Orange Army’ has been immense, as has their patience and understanding. Dawlish, welcome back to your railway.”

So what did the work actually entail? Well, teams had to confront the worst that the English Channel could throw at them, in all sorts of weather.

Looking out of the window now, at the spring sunshine, it is perhaps easy to forget that only a few weeks ago horrific storms were battering the UK and breaking the railway.

The ‘Orange Army’ was out in that, and could only work on the wrecked wall when the tide and wind allowed.

Rob Burr is construction manager for BAM Nuttall, the principal contractor for the section between Dawlish and Dawlish Warren.

“The priority for Network Rail was to get the railway running,” he told RAIL on April 4. “We were working 24/7 from February 6, with core teams working day and night. We would reinforce those teams with those from other sites across the UK. Probably the furthest we brought people in from was Wigan and Manchester.

“In the early days it was a challenge because literally every high tide we would lose two hours’ work time, or when there were high waves. The location was risk-assessed for working conditions. There were rules such as no lone working on site, life jackets had to be worn, workers had to be clipped to a line, and where possible work on the Up Main line.” (The Up Main is the line closest to the cliffs; the Down Main is that against the sea.)

And more work was involved than merely repairing the severed railway.

Explains Burr: “Network Rail had troughing routes through there that also carried global crossings, there were financial lines there. That was severed, and there was pressure to get the temporary scaffolding done quickly.” (The cables were placed on that scaffolding.)

Burr says the deadline was targeted for the end of March/beginning of April. But there was a problem - a landslip at Woodland Avenue, near Teignmouth, threatened the entire plan.

Again the railway rallied. “It was outside our remit, but we provided support,” says Burr. Staff and equipment were sent to the site, and the potential for a delay was averted.

“It was such a fantastic effort, we were getting feedback from people that was so positive. It was so good to have the local residents helping and appreciate our efforts. Bed & Breakfasts were opened for us.”

Burr adds that the work goes on, and that his firm has to get the wall east of Dawlish finished. Currently it is closed to pedestrians, but there are two re-opening targets (Easter and Whitsun). And he is confident these will be met.

The whole project cost £35 million. Of that, £15m was on the breach, with the rest spent along the wall. It has been money well
spent.