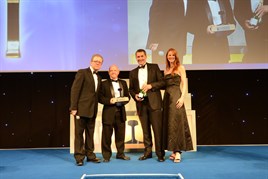 Mark Chorley was inspecting a bridge at Paignton station when he heard the news on February 4 that a storm at Dawlish was causing problems.

He was surprised, because he was working in short sleeves at the time. Paignton is only 11 miles from Dawlish as the crow flies, yet back at Dawlish the storm was raging, and staff at the Devon station were battling the elements. But then they often do.

Amid safety concerns, Network Rail made the decision to suspend trains, because of the weather. A First Great Western empty coaching stock move was the last to pass through that day. Unbeknown to everyone, it would be the last FGW train for two months.

Dawlish station is perched above the south Devon beach in a picture postcard setting, but it is totally exposed to the elements. The staff who work there have to contend with this, but are used to it.

That day, however, was described as “like being bombarded from a ship attack”, such was the ferocity of the weather. The Down platform was largely destroyed by waves, with most of it ending up on the track.

Members of staff were not able to retrieve the debris, because they were forbidden from going onto the tracks. Not because of trains, or the lack of personal track safety (PTS) certificates, but because of the sheer force of the waves crashing over the fencing onto the platforms (or at least, what was left of the fencing and platforms).

Phil Muldoon, team technican at Laira, says: “I thought it was serious. I thought we may lose jobs.

Laira Team Leader Steve Manley says he was told it could be shut for six hours.

Al Trevorrow, team leader at Laira, recalls: “We were on nights. We were going to run the trains. Got told there’s a bit of a storm. When we woke up and saw the news, we thought ‘uh-oh’.”

His wife Jane is a customer service host at Plymouth: “Oh God. I was gobsmacked… shocked. When you don’t work on the railway, you don’t realise how important it is.”

Matt Trotter, FGW gateline assistant at Plymouth, says: “I honestly did not know what would happen.”

Brett Nurse, who works in the stakeholder correspondence at Plymouth, says: “I laughed, what else could you do? I wasn’t trivialising it at all, because I wondered how it was going to be fixed.”

FGW Driver Manager Guy Santos says: “I saw the news coverage. What you tend to appreciate is there is little operational flexibility. There is no diversion. It really was cut off.”

FGW South Devon Stations Manager Ian Mundy says: “My reaction was that I am now managing a railway that is not there. I looked at the news and thought ‘what will we do’?”

What happened has been well documented. When Mother Nature is in her most destructive mood, nothing can stand in her way. Not even Brunel’s usually indestructible engineering.

On February 4, a ferocious storm hit the South West, severely damaging the railway. An 80-metre hole was punched in the sea wall at Dawlish, just north of the station. This cut off the railway west of Exeter, leaving 109 miles of railway no longer connected to the rest of the UK network.

Ten days later, on February 14, another storm blasted the region, destroying a further 20 metres of the wall. It was unknown how long the line would be closed, and there is no diversionary route.

Says Manley: “We were in St Philips Marsh (Bristol), and they told us we had better book more hotels. We hadn’t seen the news.”

First Great Western runs the majority of the trains in the South West, and manages the stations. It immediately implemented a wide-ranging bus network, in place of the trains that could not run. These carried passengers between Tiverton Parkway, Exeter St Davids, Newton Abbot and Plymouth, connecting with various FGW trains. Buses also served the stations where there were no trains at all - at Teignmouth, Dawlish, Dawlish Warren and Starcross.

FGW staff were always on hand to offer travel advice and free refreshments. Local trains continued running west from Newton Abbot, with CrossCountry also running a truncated service to Exeter, and then between Plymouth and Penzance.