"The very examplar of the modern railway manager" 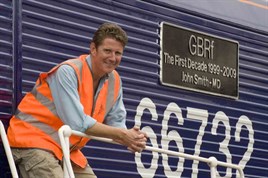 “Suffice to say, I was a little bit flabbergasted. In a world of politics and passenger railways, I’m a little humbled for a small freight business to be given so much credit.”

Those were the words of GB Railfreight Managing Director John Smith, after he won the Outstanding Personal Contribution, Senior Management accolade at RAIL’s National Rail Awards, held in London in September.

It is a richly deserved award. He has led a company that had only two employees (he was the first) to one that is now the third largest freight company in the UK, with a turnover of £90 million and which will top £100m next year.

Speaking to RAIL a few weeks after his success, Smith is still surprised. “No, I didn’t expect it,” he laughs. “It was a complete surprise. It sounds naff I know, but it is a passenger orientated industry.”

When told that he was the unanimous choice for the award (it is chosen by the NRA judges, who include some of the most experienced and respected railway people of the past 30 years), Smith says: “It is encouraging. It is good that my peer group thinks like that.”

But, in typical Smith style, he is quick to share the success. “I think it is a reflection of the hard work we do. It reflects that we are personable.

“I look at other awards in other industries and it shows just how far we have grown in a short space of time!”

Smith is a career railwayman with 35 years’ experience. He (quite literally) started with an oily rag, before eventually leading one of the most dynamic companies on the railway. Friendly and engaging, his character rubs off on those he meets. There are few with a bad word for a man who leads from the front, who believes passionately in what he is doing, and who is determined to push forward the case for rail freight.

Starting his career in his native North East (he is a keen Sunderland fan, and will often discuss his team at press launches - he was even able to see one locomotive, 66725, named after his beloved team), he has risen to the top. Whether it is winning new business for his company, meeting and greeting his staff, or leading them for a drink when the work is done, Smith gets the job done.

His first role was a technician apprentice at York, “a kind of dual-trained work”. He started in 1977, when it was still British Rail. “Yes there were many things the old BR did that was wrong, but it trained people well.”

He didn’t want to do anything else. “In those days the railways were like computers of the time. It’s not the case now. Railways are almost a laughing stock, and that is a worry. As a career it pays well. It is not a bad way to go.”

He then became a professional engineer, although his main aim was management. Eventually he ended up working at Bounds Green, and become project manager at Crewe during the station’s remodelling in 1985. “We worked on the OLE… and there were ‘40s’ pottering around.” He chuckles when talking about the big Type 4s.

His first true management role was at nearby Longsight depot in Manchester. He was shift manager, tasked with looking after the entire depot after unification of the engineering and operational sides.

From there he moved to Willesden, becoming fleet engineer for the southern end of the West Coast Main Line. That, he explains, was the first time he had been in charge of train crew.

He then moved to Anglia Railways in the run-up to privatisation, and was manager of the train crew and engineers based at Norwich Crown Point. When AR was privatised and became a GB Railways company, he was appointed deputy managing director and given responsibility for all staff members.

But how has he risen through the ranks? “Experience helps, and a knowledge of the commercial side. You can get good engineers and good operators, but they may not know all that is needed commercially. It is not rocket science, though, and there are some very good people. You get some great people who really understand the detail.

“For example, key these days is the interface with the customer. Making money is a number of different things. Perhaps it is the last box on a long container train, or the last stone on an aggregates train, or making the timetable more efficient.

“They need to know operations, contracts and risk. You don’t want assets sat around. These have fixed costs - things you can’t avoid, cost you can’t avoid. Fuel, track access, maintenance, that is 30%-40% of the costs. You could turnover so much per month, but you still have the costs.

And you have to plan. You could be flat out making money, and it doesn’t take much to affect you. A royal wedding… extra Bank Holidays. If you know it is coming, then you can plan. But if not… you want it busy, and you certainly have to juggle.”

This is the message he is trying to get across to the supply chain.

“It is not one-year warranties we are interested in when buying vehicles, it is a lifetime. They need to understand what we do. People will ask how many wagons I want. I say a train has 25 wagons, and that is what I want.

“Suppliers need to realise they are working with us. Take EMDL. They have won a long-term deal with us. They shared the pain and knew the risks. You cannot afford people and assets to be standing around.”

He tells RAIL that rather than miles per casualty, GBRf monitors earnings per locomotive. “It makes money by running.”

Smith is trying to attract more youngsters to the industry. Graduates are being taken on, but only people who want to progress.

The first contract GBRf won was with Railtrack in April 2000, with the first trains running the following year. By the time GBRf trains started rolling there were 25 staff members, but for about four months, Smith was by himself. But this did not deter him, and the company went from strength to strength.

Intermodal was the next target. And with Smith’s drive leading the company, GBRf was able to break Freightliner’s monopoly at Felixstowe.

To this day GBRf continues to explore new opportunities to the Suffolk port, while Smith is also championing the cause for electrifying the railways that serve it. The port, he believes, is vital to UK prosperity.

With the company continuing to grow, Smith wants to be able to use its influence. “The bigger you are the better credibility you have.”

Naturally he wants only the best for his company, but Smith is also keen to see rail freight as a whole grasp new opportunities.

At a recent event to mark the opening of a new chord at Nuneaton, something that Network Rail’s head of freight (and former GBRf employee) Tim Robinson described as “one of the most important few hundred yards of track that has opened for many years”, Smith was the only senior manager from a freight company to attend.

He used the occasion as a chance to campaign for the Nuneaton-Felixstowe route to be electrified. He won’t be drawn into why his competitors will not attend these events, nor back electrification so openly as him, but his passion seems unrivalled.

Smith has also previously expressed his confusion as to why government has decided to erect overhead wires between Basingstoke and Southampton, when that section is already electrified with third rail. Yes, he would benefit more from wires to Felixstowe, but believes his company is now of sufficient size and strength that it can have some influence on these types of decisions.

“We are working in an industry that is highly regulated. Franchises come and go, but we are still here.

“Tim Robinson says that the UK needs a profitable rail industry. We need access and intermodal subsidies, and we need to influence these decisions.”

Smith is critical of decisions to increase access charges for freight (RAIL 697). “It is due to come to a conclusion regarding coal and its review. Really, rail freight ought to be encouraged.”

Should the industry in general be helping the freight sector? “You would think so. There should be a structure to help it.”

Smith has developed not only new business, but also new traffic flows, as well as the hardware needed to make them successful.

His company has been able to enter new markets and enjoy real successes - such as the coal sector, where it went from 0% to 12% of the market in a year. It is currently at 30%.

“It is an organic growth, and will continue to grow.”

There has been a bit of stagnation, he says, but some parts are doing well. “Steel and aggregates have been affected , but containers have grown. Coal has bucked the trend. If coal will keep going for 18 months then it will begin to drift.” That, as Commercial Director Phil Webster explains (see pages 34-37), is because of changes in the way energy operators will use fuels.

“The market is that intermodal is really hard against roads. The margins are small,” says Smith.

“There are also opportunities through the Channel Tunnel. But don’t be under the illusion that there’s a lot to be had. I understand the market there better now, and we are looking at Tunnel traffic, but the focus is UK-based. We are looking to diversify.”

How is the company going to grow? He highlights recent contract wins at Celsa’s Cardiff plant and SSI’s re-opened Lackenby steelworks.

“These are forward-thinking. There are opportunities to expand with customers. I think we can expand laterally. We can get rail haulage, and new-to-rail work.

“We can think horizontally. We can control all areas for a customer, such as load and unload, and maintaining the tracks.”

GBRf does this at Lackenby and Cardiff, while at Paddington it manages the off-loading for Crossrail. It also manages NR’s Whitemoor yard in March, something it has done since the yard re-opened in 2004.

How far would the company go regarding what it could offer?

“I wouldn’t want to make cement - we are a rail operator. The key elements are handling the materials, infrastructure and management. We would be willing to manage infrastructure.”

He cites the DB Schenker model at the Olympic park freight site. This was a site that was purpose-built to handle trains serving the construction of the Olympic Village and associated developments. DB created it at its own risk, and managed and operated all lorry movements. That, he says, is what GBRf could be looking at. “You were asking how to develop. That is a way to do it.”

GBRf has had no fewer than three owners, and yet Smith has led his company to new triumphs with each. GBRf is a regular finalist and winner at RAIL’s National Rail Awards (in 2012 it was also highly commended in the Freight and Logistics category) - a testament not only to Smith, but also to his staff to ensure the very highest standards are met.

He makes sustained efforts to meet his staff both socially and professionally.

In 2009 he told RAIL that having doubled the size of the company in its first decade, he believes he can lead it to the same achievement by 2019. You’d be hard pressed to find anyone who disagrees.