Get the ‘Gen’ on Freightliner’s new owners 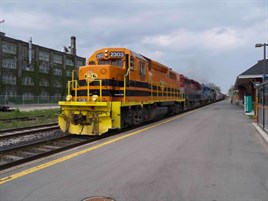 The name makes it sound like some backwater railroad in the US, with wood-burning locomotives rattling along on unkempt tracks across trestle bridges.

But Genesee and Wyoming (G&W) is actually something of a major force in global rail freight. And the company has just spent £490 million on acquiring 95% of the shares of Freightliner (RAIL 769).

So here are ten interesting facts about Genesee and Wyoming Inc. that will provide all the background you need.

1. The company was originally formed in 1899 when Edward L Fuller bought the bankrupt Genesee and Wyoming Valley Railroad, a 14-mile line set up in 1891, to serve his salt mine in Retsof (New York state). He brought the line back to profitability, and then released it to move on to other operations.

2. G&W’s current chairman is Edward L Fuller’s great grandson. His name is Mortimer B Fuller III, and he bought the original Genesee and Wyoming Railroad in 1977, forming the G&W holding company. That meant the original railway still served the original salt mine for which it was built, and is in the hands of the family that owned it at the turn of the 20th century. The G&W railroad still operates, although it was absorbed into the Rochester and Southern in 2003.

3. From its humble beginnings, G&W now operates 116 different railways globally. It runs trains in the Netherlands, Belgium, Australia, the US and Canada. Its specialism in short lines stems from the 1980 Staggers Act, which deregulated America’s railways, allowing companies to dispense with unprofitable routes. In the 30 years since the Act was passed, G&W has acquired scores of regional lines.

4.The company owns the heaviest trains in North America. Western Labrador  Rail Services was formed in 2010 to transport iron ore from a mine in Bloom Lake (Quebec) to Wabush (Labrador). These trains operate in almost Arctic conditions (the temperature in nearby Labrador City at the time of writing is -30°C), and trains can weigh up to 30,000 tonnes.

6. The company runs railways from Labrador in northern Canada all the way down through most states in the US to Tijuana on the Mexican border. The company doesn’t run extensively in Mexico, but does own minority shares in Bolivian railway Ferroviaria Oriental.

7. In 2010 the company acquired the 1,400-mile Darwin-Tarcoola line in Australia. It also operates ports in South Australia - in Adelaide, Whyalla, Port Augusta and Ceduna. The line runs north-south, and carries minerals, gypsum and other heavy industrial materials. The bulk iron ore train to Whyalla is one of Australia’s heaviest, at just over 12,000 tonnes. As well as the massive bulk minerals trains, G&W Australia also operates a number of 3ft 6in narrow gauge lines to haul limited use grain trains in South Australia.

9. Apart from owning short lines, G&W also specialises in shunting or “switching” operations at ports and industrial complexes. In the US it has its own specialist shunting subsidiary, Rail Link, which carries out shunting and ‘transload’ work in dozens of ports and hubs across North America. (It also operates RRF trains in Rotterdam). Transload is essentially an intermodal operation, taking freight off lorries and ships and putting them onto trains (or vice-versa).