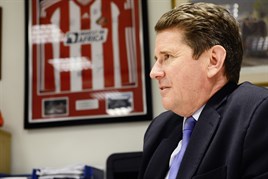 About halfway through our conversation, John Smith turns to a folder and looks for a map of the planned ‘Electric Spine’ route to Southampton.

He is looking for the map to illustrate a point he wants to make about the ‘Electric Spine’ route, something that he cannot fathom happening. But he gets sidetracked when he chances across a fixture list for his beloved Sunderland football club, which is never far from his thoughts.

It is a topic he nearly always brings up when chatting with RAIL. Overlooking his desk in his London office, next to pictures of his business through the years, is a signed Sunderland shirt. His passion for his football team almost - almost - rivals that for his business.

Smith is Managing Director of GB Railfreight. Engaging company, he was described by someone who once worked for him as “a proper railwayman”. It’s rare to hear a bad word about him.

Smith has led the company from a workforce of one (him) in 1999 to a firm that is now the third largest in the rail freight sector, with a turnover of £100 million (set to rise to £150m by the end of next year).

It has just bought the largest number of locomotives in one deal since EWS bought 250 Class 66s in 1996. These locomotives are required because of the contracts that GBRf keeps winning.

His company is also innovative. GBRf is revamping 50-year-old locomotives with brand new diesel engines that offer twice the power, enabling them to operate across the UK.

It has imported locomotives from abroad, to meet a chronic shortage of motive power.

And in the early days, it ran specific dedicated intermodal trains on which individual companies could buy individual spaces.

Within a year of entering the coal sector, it had 12% of the market. And today, it is the single biggest operator of biomass traffic in the UK - a market it wants to grow still further. GBRf was also the first to break Freightliner’s stranglehold on Felixstowe.

The firm has also been instrumental in London’s transport regeneration. It hauls Bombardier’s new S-Stock trains from the Midlands (where they are constructed and tested) to London, and has won contracts with Crossrail to move materials to and from various sites. In addition, it operates intermodal trains through the city, carrying items that will find their way back to London in the hands of consumers.

RAIL meets Smith in December, in his office near Liverpool Street. This is a busy time for GBRf. It has just won a deal to operate sand trains from Norfolk, and a deal with Network Rail to operate the latter’s National Delivery Service (NDS) trains in the East.

A new contract with Crossrail has recently started, biomass work continues to expand, and the intermodal sector is bouncing back after a shaky period during the recession. More new flows are in the pipeline.

The sector as a whole is performing well. The Office of Rail Regulation’s 2013-2014 Quarter 2 Statistical Release on freight rail usage, published in mid-December, showed an 8.9% rise in rail freight moved, compared with the previous year.

“It’s important that the Government recognises the contribution the rail freight sector makes to regional and national economic growth, and creates an environment that allows it to continue to expand,” says Smith.

“These figures are also interesting because they illustrate the rapid economic expansion experienced across the rail freight sector, despite capacity constraints on the network. Since privatisation, the story of rail freight has been one of great success, with growth of up to 60% in 20 years.

“GB Railfreight, in particular, embodies this success, having developed from a company of just two employees and zero contracts in 1999 to one with a turnover in excess of £100m. In 2014, we will be looking to expand and further develop our bulk materials, intermodal, railways infrastructure and rail industry services businesses.”

It’s the regeneration of London that Smith is keen to discuss first. Another of GBRf’s contracts was one signed with Metronet almost eight years ago. This was a key innovation, as it entailed the acquisition of main line locomotives and wagons for use on the London Underground. A yard was opened at Wellingborough to accommodate trains.

“It was for the renewal of infrastructure on the Metropolitan, District and Hammersmith & City Lines,” recalls Smith. “The logic was high-capacity renewal. That has rolled out and been very successful.”

The connections with London Underground didn’t stop there. In November 2013, two Class 66s were repainted into liveries depicting the LU system.

“We got involved with LU and LU150. Sir Peter Hendy has an interest in what we do, and we wanted to celebrate.”

Smith says credit is due to Hendy, for the transformation of the Tube.

“This Tube is one of the best. It is a generator of growth. I’m genuinely amazed by the growth. And that is from the way the system has grown.

“I came in once from the LTS , and it was like a ploughed field. But now the Tube is immaculate.”

“We have been involved in the regeneration. We have a unique selling point here. We work with Transplant . Their drivers relieve ours when working in possessions, and they drive our ‘66s’ under 10mph in possessions.”

Smith sees GBRf as London’s freight operator. “There is the important issue of freight to and from London. Freight is important to the construction of Crossrail, and the renewal and upgrade of LU. We bring other materials in. Intermodal doesn’t stop there, but it will come down the M1 in lorries to reach London after we have delivered it.”

Smith says the involvement of his trains in the construction projects shows the key integration that rail has to the development of London. And he is looking around for further ways to grow his business in the capital, naming Cricklewood as somewhere that could be used as a terminal.