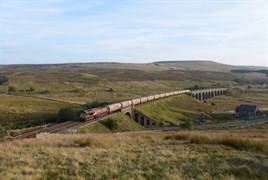 Rail freight is changing - longer trains are running, carrying different loads than in the past. But it is constrained as to how much it can grow.

Even so, it is one of the undoubted success stories of privatisation. Lumbered with an ageing fleet of locomotives from British Rail, Britain’s rail freight operators have since invested and innovated in new traction and new types of wagons.

And they have been assisted in their task of moving the country’s imports and exports - primarily between the ports and inland terminals - by investment from Network Rail (and its predecessor, Railtrack).

It is the relationship between NR and the freight operators that is particularly interesting. Each need the other, but freight operators are unlike their passenger counterparts - they are not franchised, and are more or less commercially free to do as they wish.

Paul McMahon, as Network Rail freight director, is there to manage that relationship, rather than take a hands-on role in the operational freight railway. He is responsible for the infrastructure element of rail freight at Network Rail.

But what is McMahon’s role in terms of the oversight of Britain’s rail freight flows? Is he a bridge between the various players, including the operators and industry associations?

“Our role is multi-faceted. At one level, NR is the biggest single buyer of rail freight in the country, through the engineering trains and through our haulage contract.” (Managed through the National Supply Chain, formerly the National Delivery Service).

“From the commercial freight side of things, at a simple level our job is to deliver the freight timetables, to provide the paths and good quality infrastructure, and to deliver the trains on time. But there is much more to it than that, in terms of market development - where freight flows are coming from and going to, and who wants to put what on the railway.