From poisoned chalice to Holy Grail? 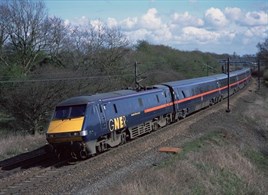 Given the choice back in 1995, you’d have to say that the Inter City East Coast (ICEC) franchise certainly looked like one to bid for… a line recently renovated and electrified, mostly operating with the newest inter-city stock on the network, and with a long heritage of high-speed, quality services.

In March 1996, the Office for Passenger Rail Franchising (OPRAF) announced that the Inter City East Coast franchise had been won by Great North Eastern Railway (GNER). GNER was a subsidiary of the Bermuda-based transport and container leasing company Sea Containers, which also owned the modern reincarnation of the Venice-Simplon Orient Express.

Starting on April 28 1996, the franchise promised great things for the East Coast route: maintaining train mileage operated in 1995/96 for two years, with a view to increasing it in future; refurbishing all existing rolling stock; improving access and security at stations; increasing car parking spaces; and providing a buffet and trolley service on all trains, with an on-board restaurant.

The choice of name - Great North Eastern Railway - revisited an era seen by many as a golden age of rail travel. And even the livery reflected that. None of that brash commercial red and silver here… no, the East Coast operator chose a tasteful dark blue with an orange band. “The Route of the Flying Scotsman” had a certain ring to it.

Perhaps the most surprising promise was the announcement by Sea Containers Chairman James Sherwood in January 1997 of two brand new tilting trains. Running at 140mph (225kmh), the units would cut the London-Edinburgh journey to 3hrs 30mins. GNER Chief Executive Christopher Garnett expected the new trains to be delivered in two years, but despite an order apparently being placed in October 1997, the tilting trains didn’t appear.

Nevertheless, GNER hit the ground running, and even improved on the fastest scheduled service in Great Britain - with an average of 112mph for its fastest London to York service. The customer service provided by the on-board staff was often highly praised, and the promise of an increased quality of food offering was welcomed (by those who could afford it).

Throughout most of the privatised operation of the ICEC franchise, Ernie Preston was secretary of the Rail Users’ Consultative Committee (RUCC), the body doing the job now done by Passenger Focus. He remembers that from the start, GNER was warmly regarded.

“It seemed like the people behind it actually did want to make it a success.  There was a bit of pride there. I mean, it wasn’t often you came across a chief executive in his shirt sleeves helping passengers move luggage from one train to another when one’s failed!

“The train terminated at Darlington and it was complete chaos as everyone was transferred onto the other train. Christopher Garnett was on that train, and got his jacket off and helped shift luggage for people. It was that kind of operation.”

GNER also took a proactive approach to its fleet. Facing a period of poor Class 91 availability, Sea Containers innovatively bought the prototype Brush Class 89 electric locomotive for GNER, restored it to main line operation at a reported cost of £100,000, and from March 1997 it was hauling services on the London-Leeds and Bradford route.

Unfortunately, it was withdrawn due to technical problems in 2000, but by then the Government had approved plans by GNER to lease some of the Regional Eurostar Class 373 units to boost capacity. Seven 14-car sets had been built as part of the failed “North of London” through services connecting to the continent, but had never been used. From the timetable change in May, they were pressed into service providing extra London to York services - albeit running at 110mph to reduce the wear on the overhead wiring.

In October 2000, the derailment at high speed of an IC225 set at Hatfield deeply affected GNER’s business - not least in having to trundle through an astounding number of emergency speed restrictions imposed by Network Rail’s predecessor Railtrack, but also in a significant loss in confidence from passengers.

And just as business was starting to recover, GNER was the blameless victim in another serious accident - this time at Great Heck, near Selby, on February 28 2001. By March 2001, the revenue of the long-distance operators was down on average by 21%.

In the background, the end of GNER’s seven-year franchise was in sight, and in March 2000 GNER and its old rival from across ‘the other side’ - Virgin Rail Group (Virgin and Stagecoach) - were both shortlisted to bid for a new 20-year franchise.

GNER’s bid included plans for a fleet of 25 Advanced Tilting Trains (like Virgin’s own Pendolinos), split between electric and diesel-powered examples to cater for the ICEC’s destinations.

But if that sounded a little ambitious, Virgin’s bid was positively incredible. It proposed introducing TGV-like trains running on a new track between Peterborough and Newcastle - while still operating services on the ‘classic’ East Coast Main Line as well. Virgin said its plans would cost around £5 billion (near around £7.6bn today).

The Strategic Rail Authority (SRA) was faced with choosing a winner from two very different bids, and Preston remembers being lost for words by this development: “How do you compare the value of a new line against, say, a fleet of new rolling stock? It’s apples and oranges - you can’t compare them.”