EMT - excellence in the face of adversity 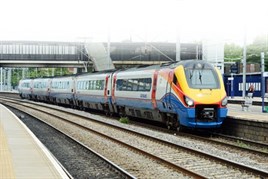 It’s the most hotly contested category in the railway ‘Oscars’. Passenger Operator of the Year is the award all TOCs vie for at RAIL’s National Rail Awards. But impressing the judges is a tall order, and it takes more than luck to win this most prestigious of awards.

During the summer, the NRA judges make ‘mystery shopper’ visits to scrutinise the level of service on offer. They sift through reams of documents and analyse statistics to decide which TOC truly deserves the highest accolade.

This year, at RAIL’s 15th National Rail Awards, that trophy was awarded to East Midlands Trains.

But what made EMT better than the rest?

It’s a “diverse” mix, as the judges put it, of InterCity services for St Pancras, cross-country services from Liverpool-Norwich via Manchester, Sheffield, Nottingham and Peterborough, and a range of rural services, that make up the complex network served by EMT.

With such a variety of services, achieving customer satisfaction is not easy. In fact, service levels have improved dramatically since franchising began in 1996. Midland Mainline began improvements on the network in 1999 with the introduction of 17 new Class 170 Turbostars, which increased the frequency of trains on the route. But when EMT introduced a revised timetable in December 2008, it focused the high-performing Meridian trains on the Sheffield-London route to slash journey times further.

A year later, an initiative with the South Yorkshire Passenger Transport Executive brought two trains per hour to the route. And over the years, revenue has kept climbing. For every 200 passengers who travelled on InterCity’s Midland Main Line services in 1995, EMT now carries 500, and they expect it to continue rising.

But despite all those improvements over the years, it was never quite enough to fight off the competition and bag the trophy. However, in the past year EMT has embarked on a number of initiatives to keep its passengers happy, and this year it was enough for them to win.

One of the most visible improvements has been the £30 million fleet refurbishment programme, which involved every single
train in the fleet being refitted and upgraded. Train interiors have been significantly improved, while delay minutes have been reduced by 20% year-on-year.

But general improvements are not the whole story. EMT has also concentrated on delivering benefits for individual routes.

The unfortunately nicknamed ‘Cinderella route’ of the Midland Main Line is one example. The moniker was coined because the line missed out when it came to investment, while other key routes received major upgrades. But all that changed in December 2013, when EMT launched 125mph running on the MML for the first time. It had an astonishing effect on the Sheffield-London trains.

None of that would have been possible without a £70 million investment to upgrade almost 160 miles of track. It was the biggest transformation on the route in years, and it was done by enhancing the existing infrastructure.

The scheme involved considerable teamwork between EMT and Network Rail, particularly during the Nottingham re-signalling scheme. This in itself was a monumental scheme. The upgrade of old signalling and the remodelling of the station was a £100m project, and a serious challenge for EMT.

Between July 20 and August 25 2013, most train services were suspended through Nottingham to allow one of the largest infrastructure projects of the year to take place, and meaning one of the longest major station closures in UK rail history. The journeys of more than 15,000 passengers were disrupted every day (even factoring in the 15% reduction in passenger numbers because of the summer holidays).

During the work, no trains ran to the north, south or west of the station, which meant no trains to London, Leicester, Derby, Sheffield, Mansfield or Worksop. But to ensure day-trippers and holidaymakers could still visit Skegness during the summer, trains were provided to the seaside town, and Lincoln, for 23 out of the 37 closure days.

Although much of the work was concentrated at Nottingham, EMT also faced a major logistics challenge to set up rail and road hubs at other stations because they were not traditionally where trains terminated. This included special facilities being provided across East Midlands Parkway, Beeston, Alfreton, Mansfield, Newark Castle, Grantham and Derby.

But despite such a high level of disruption, and the obvious inconvenience to passengers, EMT did everything possible to keep its customers happy.

The planning began back in 2009, and EMT worked closely with Nottingham City Council, the Highway’s Agency and Nottingham Tramlink to keep passengers on the move as much as possible. EMT set up a comprehensive communications campaign to keep passengers informed in advance of the work, and to keep them up to date with progress reports. The TOC used the innovative method of setting up a Twitter account, run by fictional mascot ‘Shirley’, who tweeted about the project.

Commuters are not used to rail replacement bus services, and it’s a far more common solution for weekend engineering works. But EMT ran nearly 30,000 rail replacement buses over the 37 days. An industry-first 15% discount was offered on all journeys affected by the work. Two weeks of free travel was offered to all season ticket holders, and staff even gave away 3,000 cupcakes and 3,000 macaroons as a consolation, and to keep passengers smiling during the disruption.

All this effort ensured that 92% of Nottingham station users said they were satisfied with their journey during the project.

Keeping passengers happy during service disruption is something EMT has worked particularly hard at over the past year. Almost the entire country was affected by last winter’s weather, the wettest winter in 250 years. When the St Jude storm hit on October 27 and 28, an amended schedule was put in place for the mornings to cope with the massive disruption to the London South East region.

As soon as its route re-opened, EMT found 13 trees blocking the line and overhead lines down at St Albans. The control team made swift alterations to 145 trains (which is the number usually altered in an entire month!), and they made sure customers knew exactly what was happening to their service.

But after managing the aftermath of the St Jude storm so well, EMT was to face a much larger challenge.

On December 23, an even bigger storm hit the network. Overnight, on December 23, a 50mph timetable was implemented with great success, which allowed EMT to achieve a 92% Public Performance Measure (PPM) score. EMT staff worked through Christmas Day and Boxing Day to ensure plans to restart the service on December 27 were successful. Their hard work meant that a PPM score of 87% was achieved. By comparison, other long-distance operators only achieved around 60% PPM, on what was an incredibly challenging day.

The test of EMT’s mettle continued on February 18, when the line between Sheffield and Chesterfield was closed because of a landslip at Unstone. EMT worked closely with Network Rail to ensure the railway remained open for as long as possible. A line closure was inevitable, but when it happened, EMT reacted to passenger feedback and amended the timetable to support Northern passengers and reinstate the Norwich-Liverpool service.

All of that meant that EMT managed to increase its PPM moving annual average score from 91.1% to 91.3% between November and April, despite all the challenging weather conditions and disruptions.

But that’s not the only area where EMT has excelled in the past year. The TOC’s safety record has been outstanding. So much so, that it won the NRA Safety Award three years in a row. In 2013, EMT won the award for working with Samaritans, ASLEF and NR to prevent suicides.

Since then, EMT has gone on to complete its ‘model station’ programme, to provide platform-end fencing and trespass guards at stations along the route to London.

Innovative campaign banners, originally trialled at Attenborough, have now been rolled out at five locations on the EMT network. The programme has also been upheld by the National Suicide Prevention Working Group as an example to other TOCs and NR areas.

EMT has expanded the scope of the training provided by Samaritans to include the EMT control team, and the TOC has worked with Samaritans to develop a cue card to support controllers when dealing with calls from potentially vulnerable people. They realised that awareness of the campaign was important, so promotion of the services offered by Samaritans was key. This was done through local communities and high profile awareness days.

One of these was a ten-hour event at London St Pancras station on March 13, which not only raised more than £2,300 for Samaritans, but also provided the opportunity to show EMT passengers and employees just how seriously the operator takes suicide prevention.

And it’s all paying off. EMT has a growing number of formally recorded interventions, with four positive interventions taking place in as many months.

EMT isn’t just focusing on its award-winning safety areas. In 2011, it won the NRA Safety Award for Collaborative Level Crossing Risk Management. Since then, it has taken the initiatives that were originally employed in Lincolnshire and expanded them to cover other areas in the Anglia region and the East Midlands.

Each area has a manager who leads a cross-industry group to identify the key risks for level crossings and the best way to reduce them.

EMT has worked with NR, the Office of Rail Regulation, the British Transport Police and other TOCs on the routes concerned to deal with the problems. Subsequently, there has been an increase in reports of crossing misuse from train crews. This information has helped to virtually eliminate misuse at some of the main problem crossings, including Hollows user worked crossing (UWC) on the Anglia route, which had a history of misuse.

A campaign of briefings, and educational material being provided to the owner of the farm at the crossing, has resulted in a vastly improved safety record. All farm employees have received a personal brief, and every farm vehicle carries a User Worked Crossing policy document.

Even the EMT drivers are getting involved. One driver from Norwich took the lead in group meetings and ensured the support and enthusiasm from colleagues to help reduce level crossing misuse.

That method of communication has become very important to EMT. This year, a new programme was put in place to improve communication across the business. The ‘Executive on Tour’ programme came about as a result of EMT’s staff engagement survey and forums, where staff said they wanted to see directors and heads of departments truly engaging with the business.

As a result, all areas of the business, big or small, are receiving visits from the members of the executive team, who discuss the TOC’s business strategies, and help staff to understand the important part each of them plays in the TOC’s overall success.

Even though EMT has achieved so much in such a short time, it is not resting on its laurels. The operator has more plans for the future, including creating cycle hubs at Sheffield, Leicester and Nottingham, which will feature an additional 1,000 cycle spaces, secure storage, changing facilities, bike repair tools and local cycling information. And there are plans to enhance on-board WiFi to deliver a more reliable service.

EMT has worked incredibly hard to deserve the National Rail Awards seal of approval this year. Now comes the challenge to retain it in 2015, while the rest of the network competes to better it. Well done to EMT and good luck for next year!